Technique of the Week: Sharpening

Sharpening is the process of creating or refining the sharp edge of a cutting implement. Sharpening is done by grinding away material on the implement with an abrasive substance to remove small mechanical deformations and imperfections.

Most culinary implements have a cutting edge which is essentially straight; knives, cleavers and scissors are good examples. The edge of a quality knife does not wear away; it folds over on itself. A knife edge is unbelievably thin; even thinner than a human hair. The impact of cutting causes the edge to fold over on itself. Pieces of the edge can even break off during food preparation. Anyone who loves to cook knows that working with dull knives is an accident waiting to happen. A sharp knife is a safe knife. 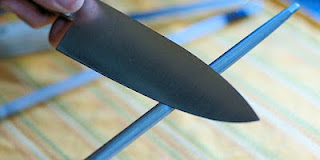 Sharpening straight edges by hand can be divided into three categories: steeling, sharpening and polishing. Edges that are still relatively straight, but need to be refined or touched up may be honed by passing the blade against a hand-held tungsten carbide knife sharpener known as a ”steel." For the record, the steel does not actually sharpen the knife’s edge. It maintains the edge by unfolding it, but the straightened edge can still be weak and quickly fold again. True sharpening removes the old weak edge and reshapes a new stronger edge.

Truly dull or misshapen edges should be sharpened with an abrasive sharpening stone, or a succession of increasingly fine stones, which shape the blade by removing material and reshaping the knife’s edge. The straightened edge is then be polished by “stropping” the edge with a fine abrasive such as jeweler’s rouge or metal polish on a piece of strong leather or canvas. If you have invested in good quality knives, you should consider having your knives professionally sharpened. It extends the life and usefulness of your favorite knives and makes them safer to use, rather than replacing them when the edges are dull or “folded.”