It is again the season of afternoon practices, extra loads of laundry, wet tennis shoes, and ravenous teenagers. This is also the season of bananas; every runner's favorite snack. Bananas have vitamins and minerals including calcium, magnesium, protein, and vitamins A, B-6, C, and E. Eating a banana right before or after a competition or workout can boost energy and athletic performance, as well as muscle activity.

But, bananas are a tricky fruit: one minute they are a perfect yellow with a pale green tint, and the next they are an unpalatable brown. Between the perfect-eating stage and the not-on-a-bet stage, you have what we call “The Foster's stage.” 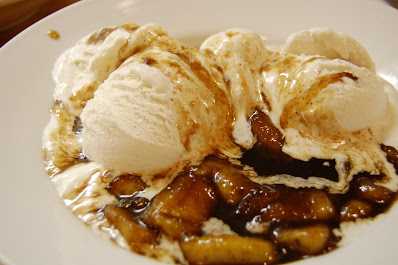 Dom and I first experienced Bananas Foster at Mr. B’s Bistro in New Orleans in 1990. Watching the blue flames licking the banana portions as the gooey caramel bubbled and formed around them permanently whet our appetites for this Cajun specialty. Once home, Dom perfected the recipe as well as the flambé technique. One memorable evening, in his enthusiasm for the beloved dessert, he mistakenly reached for cayenne pepper instead of cinnamon which resulted in our feverish consumption and an urgent quest for more ice cream to soothe our smoldering mouths.

Our boys' first introduction to this scrumptious treat was also in New Orleans at the Ritz Carlton, when after they had accompanied the gorgeous vocalist in the cocktail lounge, she arranged for each to have Bananas Foster made tableside after our meal in the dining room. When Sonny said, "This is pretty good," we both laughed out loud and said in unison, "You think!!" 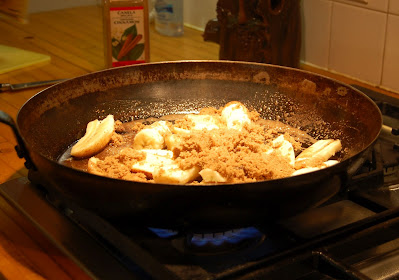 Combine the butter, sugar, and cinnamon in a sauté pan. Place the pan over low heat either on an alcohol burner or on top of the stove, and cook, stirring, until the sugar dissolves. Stir in the banana liqueur, then place the bananas in the pan. 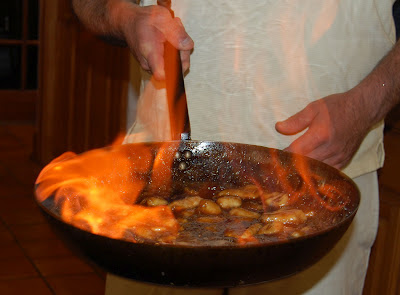 When the banana sections soften and begin to brown, carefully add the rum. Continue to cook the sauce until the rum is hot, then tip the pan slightly to ignite the rum. Swirl the pan until the flames subside, lift the bananas out of the pan and place four pieces over each portion of ice cream. Generously spoon warm sauce over the top of the ice cream and serve immediately.