It is hard to believe that there is actually a national Playdough Day. When our boys were little, everyday was play dough day! We have wonderful memories of them sitting for hours at the kitchen table molding, folding, kneading, pressing, extruding and otherwise manipulating the colorful craft dough. The malleable properties of the dough made it fun to experiment and explore while they secretly developed fine motor skills, eye-hand coordination and general concentration as they squashed, squeezed, rolled, flattened, chopped, cut, scored, raked, punctured, poked and shredded with pure joy. 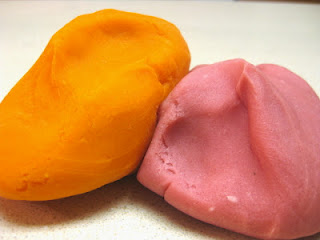 Poking in straws provided a challenge and a new physical skill. Squeezing it through a garlic press lead to excitement at seeing its shape change while using a gross motor movement to accomplish it. Forming 3-D shapes and sculptures helped self-expression as well as enhanced depth perception. Providing a wide range of “tools”  such as stamps, cutters often lead to sorting, matching, ordering and counting, and cooking play; all naturally and with no pressure to learn.

Play-Doh® Brand Modeling Compound was originally introduced as an educational tool in 1956, when the non-toxic reusable modeling compound was promoted as a substitute for modeling clay. Initially manufactured as Kutol Commercial Wall Cleaner in the 1930s, the plastic modeling compound (similar in texture to bread dough) became obsolete with the introduction of natural gas for home heating and the invention of vinyl (washable) wallpaper. However, the inventors discovered that the putty was being used by school children to make Christmas ornaments. Originally only available in one color and size (off-white in a 1 ½ pound can,) the dough was soon offered in the three primary colors and marketed to pre-schools and kindergartens across the mid-west.

Playdough was so popular with our boys that I made new batches often. That way they didn't need to worry about mixing colors (which eventually all turns to a muddy brown), or throwing it away when it turned gummy and too dry after playing with their creations. The recipe I used was a variation on the “cooked” dough method. 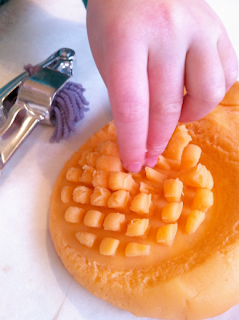 Instead of using cold water and boiling the mixture, I replaced the cold water with boiling water and stirred the mixture until it was smooth and silky. If it looks as though it is not going to mix correctly, be patient and continue to knead until it reaches the desired texture.

You can substitute a packet of unsweetened Kool-Aid for the food coloring to get really cool colors and great smelling dough. Or you can add a few drops of peppermint oil for a great smell and even longer lasting playdough (peppermint is a natural antibiotic and preservative.)

When stored at room temperature, in an air-tight container (or Ziploc bag), your playdough can last for months. If it starts looking a little dried out, wrap it in a damp paper towel and store in its container overnight. By morning, it should be softened and ready for more modeling fun.