Technique of the Week: Flambéing 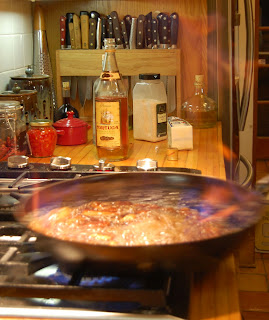 Flambéing is a cooking technique in which alcohol is added to a hot pan to create a surge of flames. The word flambé means “flamed” in French and is most often associated with tableside presentation of certain liqueur-drenched desserts, such as bananas Foster, Crêpes Suzette or cherries jubilee. It is also a procedure used in making coq au vin and other sauces, using spirits, before they are brought to the table. Although the practice of igniting food for show can be traced to the Moors in the 14th century, modern flambéing became popular in the late 19th century.

By rapidly burning off the volatile alcohol, flambéing can infuse a dish with additional aroma and flavor, and moderates the harshness of raw, high-proof spirits. The flames result from the partial combustion of the flammable alcohol, which is quickly consumed, while some residual flavor remains. Only liquors and liqueurs with a high alcohol content can be used to flame foods, and those with a higher proof will ignite more readily. Beer, champagne, and most table wines will not work. Liquors and liqueurs that are 80-proof are considered the best choices for flambé. Those above 120-proof are highly flammable and considered dangerous. While there is debate as to whether flambéing effects the flavor of dishes, it is an indicator as to when the alcohol has finished vaporizing.