If you have followed on our food adventures for any length of time it should be fairly clear that we have an eclectic interest in ingredients, cuisines (and music.) You will have also noticed that there are several ingredients that appear in blog posts more frequently than others. 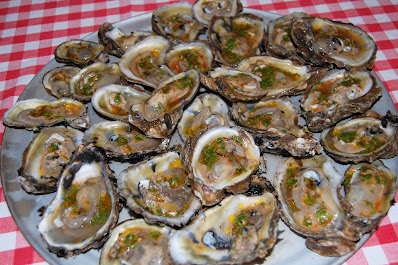 There have been many variations on lamb, squash blossoms, and like any good Italian family, tomatoes. An example of another favorite in our house is oysters. Dom rarely visits the DeKalb Farmer’s Market without bringing home a bag of fresh oysters which are most often consumed raw with a drop of Tabasco or a simple Mignonette sauce which has hardly warranted numerous blog posts.

On a recent visit to the market Dom returned with a larger-than-usual quantity of the lumpy mollusks which were originally intended as an appetizer while several slabs of ribs smoked on the grill. However, they soon turned into an appetite quashing refection. 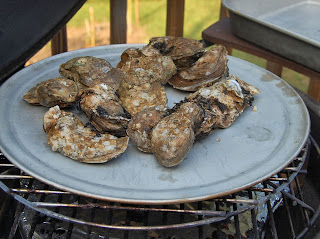 Dom placed 10 or so oysters on the top rack of the grill. Using some stunningly fresh cilantro that he just couldn't pass up at the market, and chipotle sauce originally purchased for the rib sauce, he concocted what has become our new favorite.  Thank goodness the next eight months all have the letter “R” in their names.

To Grill the Oysters:

Place the oysters on the hot grill so that they're resting on their deeply curved halves of their shells, this way their juices don't run. Make sure oysters do not overlap. Lay a wet rag towel over the oysters and cover the grill. Allow the oysters to cook until the oysters open, about 5 minutes. The oysters will pop open slightly (you can usually hear the "pop"). Once they are all open, remove them to a serving plate with tongs trying to keep the liquor inside. 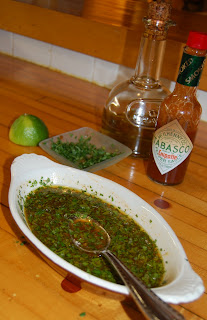 When cool enough to handle, remove the top shells and loosen the oysters from the bottom shells. The subtle smoky flavor and natural saltiness of the brine in the oysters are delicious alone, but a drizzle of chermoula elevates them to the level of nirvana.