Yesterday morning before most folks had finished their first cup of coffee, seven stalwartly foodies were seated the Cook’s Warehouse indulging in a delicious repast at the Second Annual Blogger Breakfast hosted by owner Mary Moore; Matthew Hott, Manager of the Ansley Mall location; Wendy Allen, director of The Cook’s Warehouse Cooking School; and, Jim Brams, director of public relations. 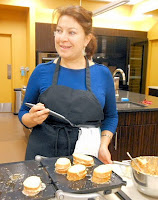 Chef Jessica Harlan of the About.com Guide to Cooking Equipment  prepared amazing pumpkin-stuffed French toast and a fruit salad with a honey lime dressing and mint in the Miele teaching kitchen.  Chef Jessica is the author of several cookbooks including her most recent title, Tortillas to the Rescue: Scrumptious Snacks, Mouth-Watering Meals and Delicious Desserts - All Made with the Amazing Tortilla.

“When you're looking for something to serve for breakfast or brunch that is even more decadent than French toast, try serving stuffed French toast. It takes a little more preparation, but it's a great way to incorporate seasonal flavors into your meal to impress guests, or to use up a handful of leftover ingredients like fresh fruit or nuts. This recipe gives you the basic concept so that you can get creative with your own ingredients or use one of the variations included below. Pair your flavored stuffed French toast with a syrup or compote in the same flavor or one that complements it, for an even more impressive way to begin the day. Slightly stale, rather than fresh, bread is far better for this recipe as it will better soak up the egg batter. 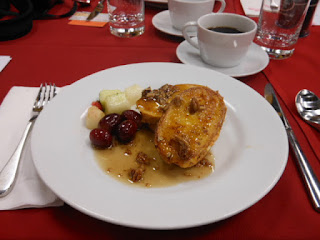 In a small bowl using of fork or a spatula, combine the cream cheese, the fruit or flavoring ingredients and the brown sugar, stirring and mashing until it forms a relatively smooth paste and the ingredients are well mixed. Spread the mixture generously on one piece of bread, and then press two pieces of bread together, with the filling facing in to make sandwiches. The filling layer should be thick enough so that it oozes out a little when the sandwich is squeezed. If the slices of bread are very large cut them in half.

Heat an electric griddle (Chef Jessica demonstrated one of TCW’s Hot Holiday Gifts for 2012 - the Cuisinart Griddler with Reversible Grill Plates: $99.99) or a large nonstick pan over medium-high heat, and preheat the oven to 200°F. In a large, shallow bowl, whisk the eggs. Whisk in the milk, ½ cup pumpkin puree, cinnamon, vanilla and salt.

Place two or three of the French toast "sandwiches" in the batter, turning them over with a tongs to let them evenly soak up the batter. Place a pat of butter on the griddle and use a plastic or silicone turning spatula to spread the butter to evenly coat the cooking surface. Using tongs, lift the French toast out of the batter, holding it over the bowl for a moment to let excess batter drip off.

While we cleaned our plates of every morsel, store manager Matthew Hott proved why the Cook’s Warehouse is About.com’s 2012 Reader’s Choice for the Best Kitchenware Retailer as he demonstrated TCW’s “Hot Holiday Gifts for 2012.” Some highlights included: 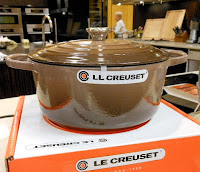 After breakfast, we said our goodbyes and we were invited to wander through the TCW flagship shop before it opened to the public. As we were leaving, we were all presented with another item from the “Hot Gifts” list, a Red Party Cup, indispensable for tailgating and holiday eggnog, as a reminder of a fun morning.