Technique of the Week: Shucking

Shucking is a culinary term used to describe the removal of the outer shell or “shucks” from either corn or oysters. Interestingly the term is not used in relation to any other food items, and corn and oysters have very little else in common. While the term dates back to the late 17th century, no one knows exactly how it came to be used. 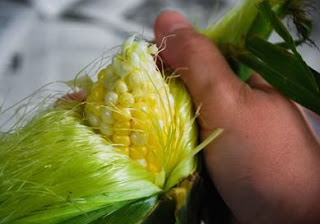 Removing the husks from corn is an easy process in which an ear of corn is grasped by its stem and the outer leaves are pulled from the top to the bottom. Once the cob with its kernels are exposed the stem and husks are broken off. Often these husks are dried for use in making traditional tamales. During the colonial era, husks were used to make dolls or other toys.

Oyster shucking, on the other hand, is a bit more difficult. You will need an oyster knife which has a short, stubby blade and a strong handle for easy gripping. Since you will need to exert a good deal of pressure to open the oyster shells, pay careful attention to the angle of the knife and the position of the mitt or towel holding the oyster. For extra protection, you should consider wearing a heavy-duty work glove on the hand holding the oyster.

Oyster shells are brittle and can splinter easily; if the shell splinters and the knife isn't angled so that is pointing down toward the cutting surface, you can lose control of the knife and cut yourself badly. Hold the oyster firmly on the cutting board to keep the oyster from sliding away. 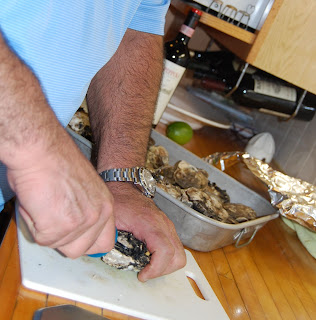 Locate the hinge of the oyster and wrap the oyster in a towel placing the hinge side up. Working on a flat, secure cutting surface, place the tip of the knife on either side of the hinge. Using a good deal of pressure, push the knife into the hinge. Twist the knife from side to side in order to pry the shell open.

Once the knife has popped the hinge, pry the lid open wide enough to fit the top of your thumb inside. Slide the tip of the knife inside the oyster and slide it along the roof of the oyster at an angle to sever the muscle that connects the two shells, and then slice through the connective muscle trying not to pierce the oyster.

Next carefully slip the tip of the oyster knife underneath the body of the oyster into the muscle where the muscle meets the shell and slice through it. Because oyster shells are surprisingly fragile, there are often small fragments that break off during shucking. These little bits of shell are very unappetizing, so scrape them away again being careful not to pierce the oyster in the process. At this point the oyster has been dislodged from the shell completely and can be served or cooked. 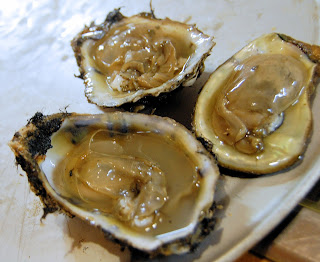 The oyster should be plump and floating in liquid. This liquid (referred to as liquor) is the natural juice from the oyster and is very desirable to oyster connoisseurs. If you are planning to serve the oysters on the half shell but accidently damaged it in the shucking process, gently turn it over. The flip-side of the oyster may be better looking than the damaged top.

If you are planning to cook them, they can be kept alive until you are ready to use them by wrapping them in a cool, moist towel and storing them in a refrigerator. Shucked oysters can be stored this way for up to two days.