...Or Perhaps a Financier with Cranberries

There are some movies and television shows that transcend the age barrier and have great appeal to parents while entertaining their kids at the same time. The Muppets are at the top of that list. Humorous and smart, Jim Henson’s creations have been engaging audience for over 40 years. “Muppet Treasure Island” starring Tim Curry was released in 1996 and quickly became our favorite Muppet caper especially the musical number “Professional Pirate” in which the characters enumerate the many careers they could have pursued rather than piracy. One of those options included becoming a financier.

With the tune running through my head, I mixed the batter for these decadent spongy tea cakes. The distinctive feature of these light and moist treats is beurre noisette (brown butter). Typically they also contain crushed or ground almonds giving them a characteristic nutty marzipan flavor. Some believe financiers got their name because they were quite popular in the financial district of Paris which surrounded the Paris stock exchange. 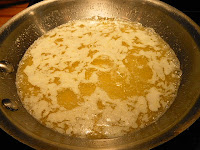 These sweet little cakes are the ideal way to use up any extra cranberries left from your Thanksgiving feast, but any fresh berry would work perfectly.  The tartness of the cranberries is a delightful contrast to the sugary richness of the financier batter. 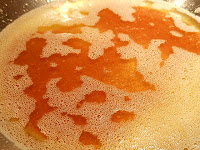 Melt the butter in a medium saucepan over low heat and simmer until browned bits begin to form on the bottom of the pan. Continue to simmer, frequently scraping up browned bits at bottom of pan for 6-8 minutes, until fragrant and dark brown but not burnt. Let cool for 5-6 minutes while you prepare the dry ingredients. 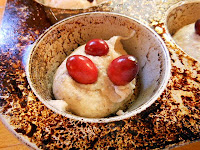 If you do not have almond flour, process 1 cup of sliced or blanched almonds and flour in a food processor until the nuts are finely ground.

Combine all dry ingredients in a large mixing bowl. Fold in lightly beaten egg whites and mix until smooth. Next mix in honey and then slowly fold the browned butter into the batter. It may seem that the butter won’t blend in, but keep mixing until all butter is incorporated. The batter will be very thick. At this point, you can cover and refrigerate the batter for up to 3 days until you are ready to use. 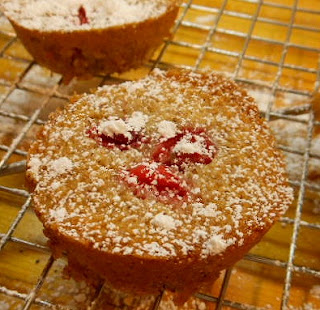 Preheat your oven to 375°F and arrange a rack in the middle of the oven. Coat a muffin pan with butter or nonstick spray. Pour a generous tablespoon of batter into each prepared muffin cup and top each with three or four cranberries which have been pierced with the tip of a knife.

Bake until the cakes for 15–16 minutes or until they are golden brown and just cooked through. Let cool in pan for 10 minutes which makes them easier to remove. Remove the cakes to a cooling rack or serving plate and dust generously with powdered sugar.  Serve the delicacies warm with some café au lait for a true French experience!