Technique of the Week: Barding 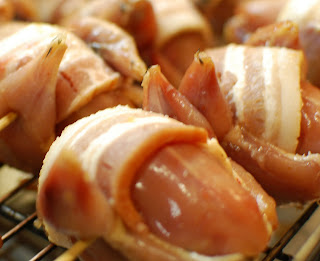 Barding is a 19th century technique for wrapping meats in a layer of fat before cooking it. Barding maintains the moisture of the meat while it cooks and helps keep it from overcooking. Barding is only necessary when the meat does not have enough natural fat. Barding tends to be employed when roasting meats, although meats that are to be grilled can also be barded as in the case of small game birds or filet mignon. The barded fat bastes the meat while it is roasting, adding flavor to the meat, especially on lean cuts which lack sufficient fat to remain moist and succulent. The barding fat is removed approximately 15 minutes before the meat is finished cooking to allow the meat to brown.

Strips of pork fat (fatback) trimmed off pork meats and bacon are common fats for barding however, if bacon is used, some prefer to remove excess salt by first blanching the bacon in water for 5 minutes or so. The barding fat can either be laid over the meat or secured with cooking string and place in a location best suited to be absorbed by the meat. 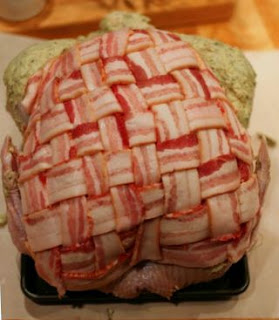 The most popular application of this technique is employed when cooking a turkey for the Thanksgiving feast:

If salt pork is not available, bacon works perfectly, but will impart a smoky flavor. The turkey breast and tops of legs are pricked all over with a fork. The breast and the tops of the legs are covered with the sliced salt pork. The wing tips should be tucked under the neck of the bird.

The bird is then covered with a 2-yard piece of cheesecloth folded into an 18" square and soaked in cold water. The cheesecloth is covered with a large piece of heavy duty aluminum foil. The turkey is roasted at 325F for 2 and a half to 3 hours. An instant-read meat thermometer inserted into the breast meat should read 140F before the foil, cheesecloth, and salt pork is removed.  The turkey is roasted for an additional 40-60 minutes at 425F for or until the breast meat registers a temperature of 165F. The turkey is then allowed to rest for 20-30 minutes, tented with foil, before carving.