Technique of the Week: Scalding

Scalding is a moist-heat cooking method in which liquid or steam is used to help solids, such as sugar, flour, or chocolate, dissolve more easily into the liquid. The technique of scalding can also be used to rapidly heat the exterior of food items without cooking through. Scalding is also used in the poultry industry to make feathers easier to remove prior to processing.

The term scalding, however, is most frequently used to describe the technique of heating milk to 180°F to kill bacteria, deactivate enzymes and denature proteins. Since most milk sold today is pasteurized, which accomplishes the first two goals, milk is typically scalded to increase its temperature or to change the consistency or other cooking interactions due to the denaturing of proteins.

The most common use of scalded milk involves adding chocolate to create every child's wintertime favorite: hot cocoa. Scalded and cooled milk is used in bread and other yeast dough like that used for raised doughnuts, as pasteurization does not kill all bacteria, and with the wild yeasts that may also be present these can alter the texture and flavor. The whey protein in milk can weaken gluten which prevents dough from rising properly. Scalding the milk deactivates the protein so this doesn't happen.

Milk that has been scalded is also used in yogurt to make the proteins unfold, and to make sure that all organisms that could compete with the yogurt culture's bacteria are killed. Original recipes for Béchamel sauce called for scalded milk because it was believed that adding hot liquid, including milk, to a roux would make it less lumpy and prevent it from tasting like raw flour. 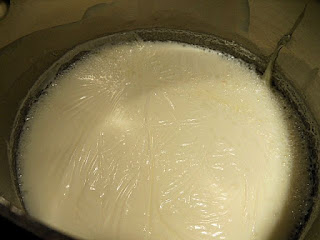 In many recipes, the real reason for scalding is to infuse it with flavor. This technique used a lot in ice cream recipes, pastry cream, and other dessert recipes because milk is an excellent carrier of flavors: vanilla beans, fresh mint, lavender buds, cinnamon, and any number of other dried and fresh ingredients are good candidates.

To Scald Milk:
In a double boiler over low hear, bring the milk to 180°F. At this temperature, bacteria are killed, enzymes in the milk are destroyed and many of the proteins are denatured. If you do not have a thermometer, the scalding point can be visually determined.

When the milk begins to form a light froth and you start to see tiny bubbles around the around the edges of the pan, it has been heated to the proper temperature.To prevent scorching, be sure to stir the milk as it heats. A thin film or "skin" may form on the surface of the milk. Not only is this completely normal, but it is another way you can tell that you have achieved the correct temperature. The skin does not need to be removed and can be stirred back into the scalded milk. You can also scald milk in a glass bowl in your microwave oven, but be sure to check it every 15-20 seconds being careful to keep milk from boiling over as it will be impossible to clean your microwave afterward.