Technique of the Week: Baking

Baking is a cooking method which uses dry heat acting by convection over a specified period of time. This is usually achieved in an oven, but can also be accomplished using hot stones, hot coals or even a car radiator. When the desired temperature is reached within the heating instrument, the food is placed inside and baked for a specific amount of time. The dry heat of baking changes the form of starches in food items and causes its outer surfaces to brown, giving it an attractive appearance and taste. The browning is caused by caramelization of sugars and the Maillard reaction. 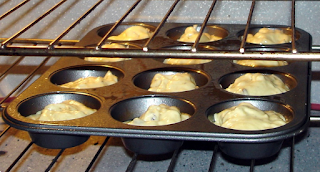 Baking is the primary method used to prepare "baked goods" such as bread, cakes, cookies, pastries, pies and tarts. This method of cooking also works well for baking potatoes, apples, beans, meatloaf, casseroles and pasta dishes such as lasagna. While frying, sautéing, and grilling can change the fat and calorie content of the food, baking does not alter the nutritional value of food items.

The first stories of baking suggest that a paste of wild grains and water were poured onto a flat, hot rock which resulted in a bread-like cracker similar to lavash. Later, this paste was roasted on hot embers making it more practical as it could be made anytime a fire was burned. The technique of baking expanded dramatically in Rome around 300 BC. The “pastillarium” or pastry cook became a respected profession for Romans and a pastry cook who could invent new types of tasty treats was very highly regarded. Cato wrote about vast amounts of breads of varying ingredients and patterns: sacrificial cakes, pretzels, sweet cakes, and fritters.

The art of baking became popular throughout all of Europe and was so common that Rembrandt painted a pastry chef selling pancakes in the streets of Germany with children clamoring for a taste. In London, pastry chefs sold their goods from handcarts which developed into a system of delivery to households, and in Paris, the first open-air pâtisseries were opened and baking became an established and treasured art throughout the entire world.

How to Bake a Potato: 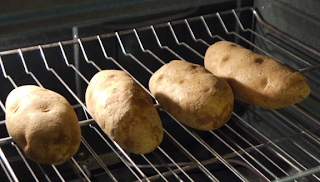 Preheat oven to 425°F. Scrub 1 medium Idaho or russet potato to remove surface dirt from the tuber and prick it with the tines of a fork or the tip of a sharp knife. You can lay the potato directly on the oven rack or place it on a baking sheet. Cook the potato for 45-60 minutes, until the skin is crispy and poking it with a fork meets no resistance. Cut a slit in the top of the potato and gently open to allow steam to escape. Add your favorite toppings (e.g. butter, sour cream, chives, salt pepper) and enjoy.