Andouille Po'Boys in the 'Hood

Many people do not know that the term Mardi Gras actually means “Fat Tuesday.” Fat Tuesday is the last day of the Carnival season that begins January 6th which is the twelfth day after Christmas, (yes, like in the song). Fat Tuesday is the last opportunity to celebrate before Lent which begins on Ash Wednesday. This pre-Lenten carnival has Roman Catholic origins and is celebrated in New Orleans, as well as Brazil, France, Germany and…Atlanta!

The Virginia-Highland neighborhood of Atlanta is known for its great restaurants and bars, several of which  have annual Fat Tuesday celebrations, but few more energetic than the festivities at D.B.A. Barbecue. This chef-owned, casual restaurant located behind the community post office goes all out with plenty of beads, Cajun-inspired menu items and specialty drinks like hurricanes and Louisiana pints to add to the authenticity of the evening. 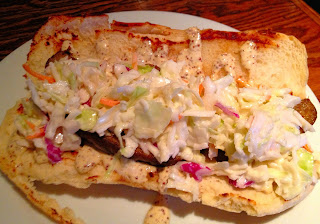 According to Assistant Kitchen Manager George Jewell, in addition to their regular Southern barbecue menu, the evening’s offerings will include fresh oysters, gumbo and several po’boys including battered shrimp, fried oyster and Andouille sausage. With a little prodding, George, an Atlanta native who has worked at D.B.A. for three years, shared the technique for assembling the perfect Andouille po’boy including the formula for making Creole mayonnaise:


Cut the Andouille links lengthwise and place on a hot griddle to sear and heat through. Place cut bread on the griddle to warm as well. 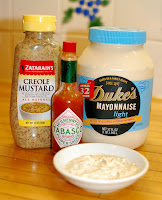 *Make Creole mayonnaise by mixing equal parts Creole mustard and mayonnaise together until fully combined. Add salt and pepper to taste and add a drop or two of Tabasco sauce if you like a little kick.

Spread both sides of heated bread with a generous amount of mayo and then lay seared sausage cut side up on bread. Top the sausage with coleslaw and serve with Cajun-spiced fries or a side of red beans and rice.

If you are in the Atlanta area you can experience this amazing sandwich first hand, head on over to D.B.A. Barbecue for beads, live music and delicious food on Tuesday, February 12th.