Traditionally the practice of eating Easter bread or sweetened "communion" bread traces its origin back to Byzantium and the Orthodox Christian church. The recipe for sweetened or "honey-leavened" bread may date back as far as the Homeric Greek period based on anecdotal evidence from classical texts that mention this type of special food. Bread has long played an important role in religious ceremonies and holidays. This is true in many cultures and cuisines. Holiday breads are often baked in symbolic shapes and include special ingredients. Easter breads often feature eggs, a commodity forbidden by the Catholic Church during lent. It is also widely known that sweetened bread desserts similar to panettone, were a Roman favorite.

Each spring, Dom’s grandmother would bake Easter bread, unfortunately, her recipe was lost over the years, but we recently got the recipe for Dom’s Aunt Rose’s version. The result was a sweet, light-yellow, brioche-style bread with a crisp crust and delicate crumb. Using her recipe was a poignant tribute to Rose who passed away last month just weeks after her 93rd birthday. 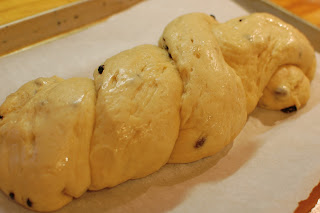 In a 2-cup measuring cup, combine milk with one teaspoon of sugar and the yeast. Set aside and let proof. 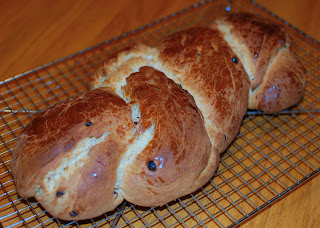 In a large mixing bowl, combine flour, sugar and salt. Cut butter into pieces and with your fingertips or a pastry blender blend into flour mixture until mixture resembles coarse meal. Lightly beat eggs with egg yolks. Make a well in center of flour mixture and pour in yeast and egg mixtures, raisins and candied fruit. Stir mixture until a dough is formed.

Transfer dough to a floured surface and with floured hands, knead until smooth and elastic, about 10 minutes. Transfer dough to an oiled large bowl and turn to coat. Let dough rise, covered with plastic wrap, in a warm place until doubled in bulk, about 1 hour. 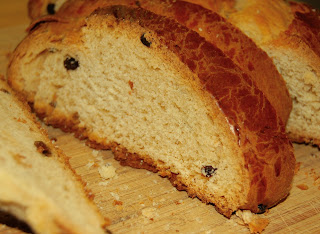 Turn out dough onto a lightly floured surface and punch down dough. Divide in half; roll each piece into a 24-in. rope. Loosely twist ropes into desired shape. Cover and let rise until doubled, about 30 minutes.

Preheat oven 350°F. Bake for 30-35 minutes or until golden brown. Remove from pan and cool on a wire rack. While the bread is delicious on its own, we especially like it toasted with butter and orange marmalade!