The traditional Mexican version of this ancient beverage is made with rice. It is always spiced with cinnamon sweetened and often flavored with lime. This drink can be found in most Mexican restaurants and is often sold by street vendors in Mexico  City. There are many tasty variations to the recipe, but they all come back to the same basic premise of a creamy, yet light drink that goes down very smoothly.  It has very pleasant cinnamon and vanilla overtones and a sweetness that is subtle and not overdone. Since it does not contain dairy, it will not spoil as easily as milk. In fact, rice milk is made using the same process as horchata with the omission of cinnamon.

The word "horchata" derives from the Latin word  hordeum which means "barley." At one time, barley was the world’s most prestige grain; the further back you go in history, the more important it was. Barley bread was eaten by Plato and Aristotle in ancient Greece and was the bread of the Bible. It would also have been familiar to Confucius in 500BC. The original horchata was the most venerable of grain drinks: barley water. Over time indigenous chufa (also known as tigernut) was substituted for the barley in Egypt.

The drink made its way to Spain. When the Spaniards brought the drink to Mexico, the natives used locally grown rice to make the drink. Horchata is sometimes made with melon or squash seeds as well. The rice, nuts or seeds are ground and mixed with water to make a milky-looking agua de fresca. 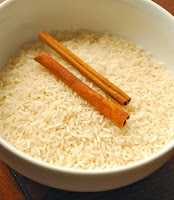 Horchata is quite well-suited for extinguishing the occasional fires that are ignited by fiery Mexican food.  It is especially complimentary to all types of savory dishes including a local favorite of fresh, hot tacos cloaked in spicy pineapple salsa. 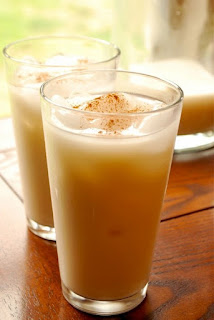 Wash and drain rice. Combine rice with cinnamon sticks in water and soak overnight in the refrigerator.

After the rice has soaked for a minimum of 8 hours, preferably overnight, discard the cinnamon sticks and pour rice, half of the soaking water, sugar and vanilla into a blender while reserving the unused soaking water. Blend rice on low for 3-5 minutes until well blended and finely ground. Pour the blended rice mixture through fine mesh sieve two times, and then through cheesecloth one more time to remove all gritty bits of rice.

Pour the strained rice water mixture into a pitcher adding the reserved soaking water and stir well to combine. Add more sugar if needed, to taste. To serve, pour over ice and garnish with ground cinnamon and a lime wedge, if desired.