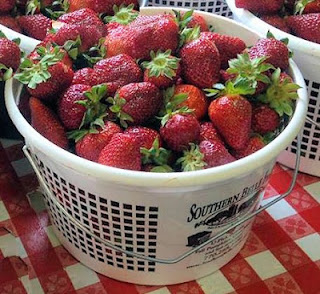 What is it about strawberries that makes you break into a smile? Is it the vibrant red, heart-shaped fruit or the bright green jester-like cap with its fingers that seem to wave merrily at you?  So perhaps you can envision the ear-to-ear grin when my adorable neighbors arrived at my door carrying a brimming bucket of freshly-picked strawberries!

After gorging myself on the juicy little devils, I decided that the only thing better than fresh strawberries might be strawberry gelato. The word gelato means ‘frozen‘ in Italian, which does little to describe the ultra-smooth texture of the frozen dairy decadence that is authentic Italian gelato.

Gelato usually has less fat than traditional ice cream because the ratio of milk to cream is much higher than in ice cream which results in less taste and texture of fat to coat your palate. Also, traditionally there are no eggs in the gelato base, so the gelato highlights the flavor of what’s been added like chocolate, coffee, or in this case: strawberries. 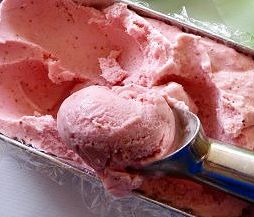 In a heavy saucepan, add milk and stir in sugar and cornstarch and whisk to make a thin slurry. Heat over medium heat until the gelato base thickens and begins to bubble, about 5 minutes. Pour into bowl and stir in heavy cream. Place the bowl over ice and allow to cool, stirring occasionally. The mix will continue to thicken as it cools.

Place cleaned strawberries in a food processor and pulse to desired consistency. We like to actually see some the fruit in our gelato, so we leave the fruit a bit chunky.  Add the fruit, lemon juice and vodka to the gelato base and chill for 3-4 hours.

Add the chilled gelato mixture to an ice cream maker and process according to manufacturer's instructions for the machine. When the gelato is well frozen, transfer it to a container. Cover; freeze until firm, at least 3 hours and up to 2 days. The vodka should prevent the gelato from freezing completely solid, making it easier to serve.

Because the storage freezers used for holding gelato in Italy tend to be kept a few degrees warmer (up to 10 degrees F) than those in U.S., it is better to let the gelato sit out for a few minutes before serving. When gelato is less-cold, your mouth does not get ‘frozen’ and you can taste the flavors even better.