We cannot imagine what our lifestyle would be like without tomatoes. Odd to think that one vegetable* could have such a huge impact on so many cultures around the world. Since their cultivation by the Aztecs and Incas as early as 700 A.D. and its introduction to Europe during the 16th century, the tomato has been a widely popular food item. Maybe this is why folks will stand in line at local farmer’s markets to pay $8.99 per pound (more than the price of NY strip steak at the local grocer) for farm-grown, vine-ripened tomatoes.

With the torrential rainfall that has made the Southeastern states more suitable for growing rice than tomatoes, we have been put in the position of picking the plump fruits before they ripen to their juiciest potential. Not being big fans of chowchow, the only logical alternative is to fry them up.

It wasn’t until 1987, when actress-turned-novelist Fannie Flagg titled her best-selling book “Fried Green Tomatoes at the Whistle Stop Café,” that the crispy-crusted tart medallions found on every dinner table south of the Mason-Dixon Line became a household name. While fried green tomatoes are typically considered a Southern dish, they can be found in northern homes prepared at the end of the season when the remaining fruit is harvested before the first frost. The northern version is more likely to be dredged in flour than in corn meal. 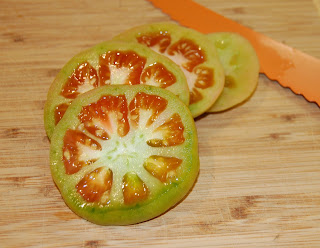 It is hard to describe the experience of biting into your first fried green tomato. The combination of hot, acerbic, juicy tomato encased in brittle fried cornmeal and flour is nothing short of exquisite despite its humble ingredients. We have found that tomatoes which have started to turn a light shade of pink work best for frying. 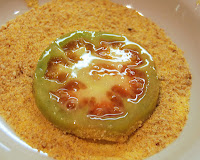 Combine the cornmeal and breadcrumbs along with a pinch of salt in a small mixing bowl. In a separate bowl, beat the egg until it is frothy. Then, heat the peanut oil in a skillet over medium heat.

Cut unpeeled tomatoes into ¼-inch slices and pat dry on a paper towel. This is the real trick to a super crispy crust.  Dip the dried tomato slices in the beaten egg and then into the cornmeal-bread crumb mix.

In fairly shallow oil, about 1/4- to 1/2-inch deep, fry half of the coated tomato slices for 3-5 minutes on each side until golden, nutty brown. Remove the fried tomatoes to paper towels to drain before sprinkling thoroughly with salt. 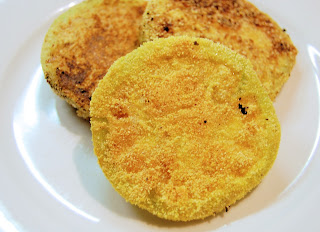 After that, all you need is a fork, but the fried tomato patties make the wonderful platform for creamy, cool cheeses like Chèvre or another quintessential Southern favorite, pimento cheese. In New Orleans, fried green tomatoes are generally served with a spicy remoulade or a little Tabasco sauce.

*While botanically speaking, the tomato is a fruit, being that it is a pulpy plant that contains seeds, legally, it is a vegetable due to the 1893 U.S. Supreme Court ruling that made it subject to import taxes.