It is with a heavy heart that I write this post. My dad, Tim Flinn, the man who taught me everything I know about gardening and homesteading, passed away this week. It has taken a while to decide how best to honor his memory here.

My dad was a true Renaissance man: Marine Corp. veteran, former carpenter, elementary school teacher, blueberry grower, sheep farmer, master woodcarver, and self-taught folk potter. A family friend (and librarian) recently commented, “Your dad could have written every how to book in the library.” He never cared that I was a girl; he taught me anything I was willing to learn (and a lot that I wasn't.) I learned how to hammer planking on the deck of our house, drive a tractor, bait a hook (even though I still hate doing it), fire a rifle, render lard, build and fly a kite, help deliver lambs in Spring, and make a mean old-fashioned. 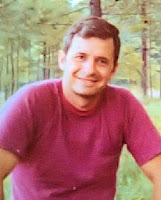 Dad was also a consummate storyteller. There was never silence when Dad was in a room!  He would wax nostalgic about his time in Okinawa or about framing houses in the suburbs of Boston. He pontificated on any political issue and gladly shared his knowledge on any project I endeavored.

Years later, in my own home with a husband and kids, Dad would stop by on his way to or from the “aventure du jour” to visit. Frequently these visits occurred around lunch time. The typical exchange went something like this:

Denise: “You hungry? Would you like something to eat or drink?”
Dad: “Of course. I can always eat something.”
Denise: “What would you like?”
Dad: “Do you have any of that gazpacho you make?” 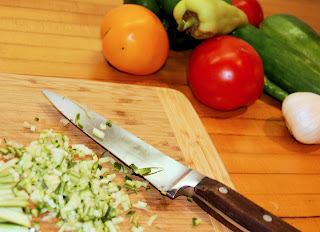 He knew full well that I didn't have any gazpacho on hand and that I would make it fresh while he waited. So I would grab a few of the tomatoes, cucumbers and peppers just picked from the backyard garden and start mincing the ingredients while he sat comfortably at the kitchen counter regaling me with his latest adventures, triumphs and defeats. For years, I thought the reason he asked for gazpacho was that my mom was not a big fan and rarely made it. It wasn't until I sat down to actually write this post that it occurred to me that the real reason he asked for the hand-chopped, made-while-you-wait potage was that I became his captive audience and would give him my undivided attention while I meticulously chopped each ingredient. And, yes, some people toss all the veggies in a food processor and blitz them to smoothie thickness, but I prefer (as did my dad) the organic texture of the hand-chopped version as the garden goodies tend to keep their identity and crunch.

So, some of you are thinking: “what is the big fuss over gazpacho?” In a nutshell, gazpacho is a liquid salad consisting of finely-diced, super-fresh vegetables and tomato juice served as a cold soup. Made with vine-ripe tomatoes, bell peppers, cucumbers, garlic, olive oil, and a splash of good vinegar, it is the signature dish of Spain's Andalusia region. Gazpacho originates from a 17th Century Arabic soup consisting of just bread, almonds, olive oil, water and garlic. Later Andalusian field workers needing a modest lunch and relief from the fiery summer heat added New World tomatoes and peppers thus transforming the soup into today's classic red gazpacho. There is a simple reason this soup has been popular for centuries: it is delicious. 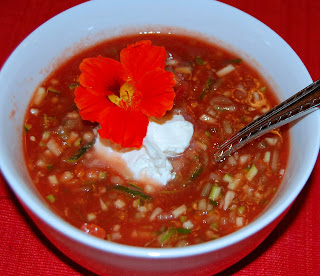 In the bowl of a food processor or in a blender, combine the minced garlic with half the red onion, half the cucumber, half the tomato, half the zucchini, half the celery, half the tomato juice, olive oil, red wine vinegar, sugar, spices, herbs of your choosing (oregano, thyme, basil, cilantro, parsley) and a dash of salt. Pulse until all ingredients are blended well; mixture will have a nice speckled, colorful texture.

Pour into a large bowl and add the rest of the tomato juice, and the remaining onion, cucumber, tomato, zucchini, and celery. Stir mixture together and check seasonings, adding salt if needed.

If possible chill soup for a couple of hours before serving; gazpacho is best served very cold! Otherwise, chill over a bowl of ice or add a few ice cubes to the soup.

Remove the soup from the fridge and stir. Check seasonings one last time. Ladle into a bowl and garnish with your favorite toppings such as a sliver of fresh avocado, a dollop of sour cream, chopped cilantro or even a scoop of fresh crab meat, and serve with slices of grilled bread.
This recipe was featured in the August 2014 issue of Best Self Atlanta magazine.