A chocolate brownie is a flat, baked square or bar developed in the United States at the end of the 19th century. The brownie is a cross between a cake and a cookie in texture. Brownies come in a variety of forms. They can be either fudgy or cakey, depending on their density and they may include nuts, chocolate chips, or can be frosted. Brownies are a common lunchbox addition and are popular in restaurants, where they can be found on many dessert menus served warm with ice cream (à la mode), topped with whipped cream or sprinkled with powdered sugar. The earliest published recipes for both cakey- and fudgy-style chocolate brownies have been traced to The Boston Cooking-School Cook Book, edited by Fannie Merritt Farmer in the late 1890s.

Nineteenth century changes in chocolate form, taste and availability encouraged experimentation in cooking and baking. Boston-based chocolatier Walter M. Lowney debuted the first American-made chocolate bars at the Columbian Exposition held in Chicago, Illinois, in 1893. Many culinary historians believe that it was also at the Columbian Exposition that brownie was introduced. As the story goes, wealthy socialite Bertha Potter Palmer asked her chef to create a dessert that could be tucked into a box lunch for ladies to eat while attending the Columbian Exposition.The resulting treat was a super-rich, fudgy-chocolate confection topped with walnuts and an apricot glaze that was the predecessor to the modern-day brownie. 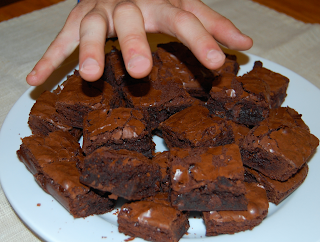 Regardless of their origin, it is clear where brownies are going… into the mouths of three of their biggest fans. A full batch of brownies rarely lasts a full day in the Romeo house! While I no longer need to refer to this recipe, we are sharing our family’s version is hopes it will become a favorite in your house. 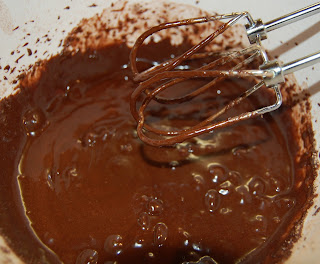 Stir in nuts and morsels, as desired. Spread batter evenly into a greased baking pan.  Bake 20 to 25 minutes or until brownies begin to pull away from sides of pan.

They are done when a toothpick pricked into the center comes out clean with no batter. Cool completely in the pan on a wire rack. Cut into squares small or large and watch them disappear!