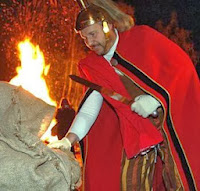 This eleventh day of the eleventh month, is known in many countries of the world as St. Martin's Day or "Martinmas." During the Middle Ages, Saint Martin was the most popular and charismatic saint. In France, he is still a major religious figure whose tomb attracts people who come to be healed as at Lourdes. He became the patron saint of the French monarchy and also of churchgoers, innkeepers, grape growers, and winemakers, and in some places he is also the protector of drinkers. Many stories about him involve wine.

Perhaps the most famous tells of his rescuing a drunken man by taking his own cape from his shoulder, cutting it in half, and then wrapping the man in it to protect him from the cold. That same night he dreamt of Jesus wearing the half-cloak he had given to the poor man and thanking him for his compassionate gesture. It is also said that at the moment he shared his cloak, the sun came out. I am sure many of you have heard the term Indian summer before when referring to a spell of warmer than normal temperatures accompanied by sunshine and dry and hazy conditions. In Italy, these mild days are called “Estate di San Martino.”

St. Martin’s Day marks the end of winter preparations and is the beginning of the natural winter. It is also the time when newly produced wine is ready for drinking. As a result, St. Martin's Feast is much like the American Thanksgiving; a celebration of the earth's bounty. Because it also comes before the penitential season of Advent, it is considered a time of "carnival," with feasting and bonfires before a period of fasting. 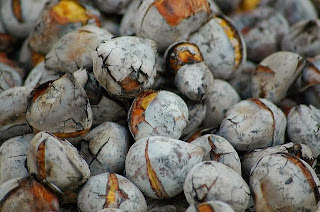 In some countries, Martinmas celebrations begin exactly at the eleventh minute of the eleventh hour of the eleventh day of the eleventh month. In others, the festivities commence on St. Martin's Eve with children carry lanterns in the streets after dark, singing songs for which they are rewarded with candy. Bonfires are built and folks make merry drinking mulled wine and eating magosto which are chestnuts that roasted under the embers of the bonfire. Magosto are often left out at midnight as homage to deceased family members to “eat.”

In Piedmont, people celebrated with seasonal produce of chestnuts and wine for San Martino. St. Martin is credited with a prominent role in spreading wine-making throughout the Touraine region and facilitating the planting of many vines. Martin is also credited with introducing the Chenin blanc grape varietal, from which most of the white wine of western Touraine and Anjou is made. 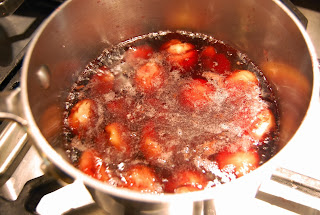 What better way to honor St. Martin than with a recipe for Castagne Ubriache (Drunken Chestnuts) that incorporates both chestnuts and wine. This traditional Tuscan treat is delicious served with artisanal cheeses and Vin Santo or another dessert wine. 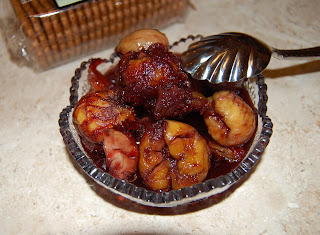 To roast the chestnuts, preheat the oven to 350°F, and with a sharp knife, make a slit on the rounded side of each chestnut. Arrange the chestnuts in a single layer in a baking pan. Place in the oven and bake for 30 minutes. Remove the chestnuts from the oven.

While they are still warm, remove the hard outer shells and the furry inner skins. In a saucepan over low heat, combine the wine and sugar and stir to dissolve the sugar. Add the chestnuts and cook until the wine is reduced to a thick syrup, about 30 minutes. Transfer the chestnuts to a serving dish and serve hot.