Founder of the Feast Brown Bread

We always thank the pilgrims for our Thanksgiving, yet we might be equally indebted to another sturdy New Englander: Sarah Josepha Hale, editor of the popular Victorian magazine Godey's Lady’s Book. Her decades-long campaign to extend a New England custom to a growing nation reached from the frontier reader of Godey's right up to the President. In 1863, at her prompting, Abraham Lincoln proclaimed a national Thanksgiving event now marking its 150th anniversary, and coincidentally Sarah's 225th birthday.

George Washington set aside the last Thursday in November 1789 to honor the newly minted Constitution (Sarah would later point to this date and the precedent.)  However, since even the Pilgrims themselves didn't regularly repeat their famous feast, its subsequent observance continued by local customs and whims. One year, when a molasses shipment was delayed, a Connecticut town casually postponed its holiday until the pie makings arrived. 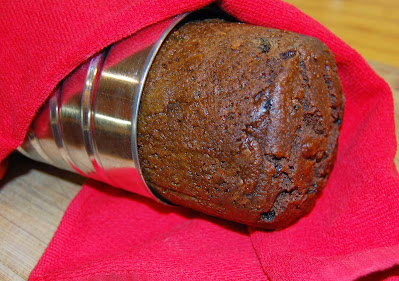 Widowed just before the birth of her fifth child, Sarah took up a pen and began writing to make ends meet. After several successful books of poetry (one of which included her best-known poem Mary Had a Little Lamb), and a novel about slavery, the successful novelist was asked to edit a women's magazine which would later merge to become Godey's Lady's Book which featured original, American writing including leading writers such as Hawthorne, Longfellow, Emerson, and Poe to whom she paid 50 cents a page.

As the editress antebellum America's most widely circulated magazine, Sarah began her campaign for a national day of Thanksgiving. In her editorials, she explained how to celebrate with seasonal recipes for chicken pies, ducklings, vegetable platters, gravy, pickles, preserves, cakes, and a "variety of sweetmeats." As the nation sprawled westward and rifts between North and South grew deeper, her editorials stressed the holiday's "moral and social reunion of the people of America" - a point she pressed in thousands of letters through the decades to governors, senators, and influential personages, as well as Presidents from Zachary Taylor on.

Her Thanksgiving campaign took a new turn in 1863, in the war-weary aftermath of Gettysburg. That summer her editorial called not to governors, but for a Presidential edict. On October 3, 1863, Lincoln issued a National Thanksgiving Proclamation setting aside the last Thursday in November. Lincoln's graceful proclamation held to Hale's New England traditions, stressing “a fruitful land and healthful skies," with a conciliatory note asking for "interposition of the Almighty Hand to heal the wounds of the nation.”

However, the war dragged painfully past Lincoln's second proclamation in 1864; the following spring, an assassin's bullet took him. Hale pressed her cause with President Johnson and, later, with Grant. Their yearly proclamations, following Lincoln's lead, addressed a reunited country, firmly established the custom of our annual Thanksgiving, and answered one of the many prayers of Sarah Josepha Hale. On December 26, 1941, President Roosevelt signed a bill, some 62 years after Hale’s death and for the first time the date of Thanksgiving became a matter of federal law and fixed the day as the fourth Thursday of November.

One of the earliest recorded Thanksgiving recipes was for brown bread made with cornmeal and molasses. Puritans did not use white flour because it was expensive and “too fancy,” while whole wheat, rye & corn flours were cheap and plentiful.  The Brown bread was steamed since cooking was generally done over an open fire as New England homes of the period were crudely thatched cabins and few had ovens. Steaming is an effective way to make bread without an oven. This traditional and rustic bread is very hearty and quite delicious, especially when toasted and served with cream cheese and homemade marmalade. 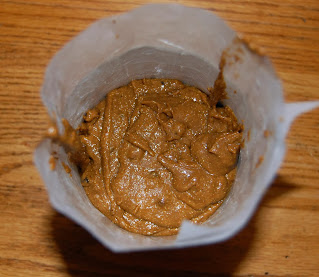 This batter makes one round loaf steamed in a metal can that is 6-inches tall by 4-inches in diameter. The one I used formerly held ground espresso powder.

Preheat the oven to 325° F and bring a medium pot of water to a boil. Grease the coffee can with cooking spray or line the can with parchment paper. 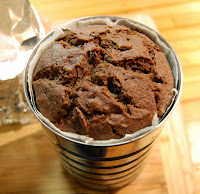 In a large bowl, whisk together the all-purpose flour, rye flour, corn meal, baking powder and soda, salt, and allspice. In another bowl, mix together the sour cream, egg, and molasses. Pour the wet ingredients into the dry and stir well with a spoon. Pour the batter into the coffee can taking care that the batter does not reach higher than 2/3 up the sides of the container.
Cover the coffee can tightly with foil, put it into a pot with water in one-third up the side, and then place the pot into the oven. Steam the bread for at least 2 hours and 15 minutes (yes, really). Check to see if the bread is done by inserting a toothpick into it.

Remove from the oven and let cool for 10 minutes before putting the can on a rack. I know you are anxious to see how it came out, but don't try to remove the bread from the can yet! Let the bread cool for 1 hour before turning it out of the container.