To Bean or Not To Bean Vanilla Extract

Somewhere between the second batch of pizzelles and the panetonne, the last drop of vanilla trickled sadly from the little brown bottle sending me rummaging for more. I came across some vanilla beans received as a gift a month or so earlier, however, these were not entirely helpful because they were not liquid in form and I had no idea how to use them in a recipe. Then I remembered that Dom’s Aunt Rose always substituted bourbon in a pinch. So I finished the recipe with a dribble of bourbon.

Later I did a little research and found that vanilla beans can be substituted for extract by using one whole bean (split and scraped) in place of one tablespoon of pure vanilla extract. For those of you who can do simple math, I think you can see where this post is heading… You guessed it: homemade vanilla extract. Pure vanilla extract is made by macerating vanilla beans in alcohol. Clearly I had the two key ingredients needed to make extract and with the four beans in the pantry and a cup of bourbon, I could make 16 tablespoons of extract – quadrupling the utility of my beans. Since there are ONLY two essential ingredients, they should be of the best quality you can get.

Pure vanilla extract is made by macerating vanilla beans in alcohol. Natural vanilla beans come from a beautiful species of yellow orchid native to Mexico but is also grown In Madagascar, Tahiti, and other tropical regions. After pollination the orchid’s flowers die, and long, green seed pods grow in their place. The pods are picked when they're 6" to 9" long at which time a six-month curing process begins. Cured vanilla beans are dark brown, fragrant, and have a thin white coating of vanillin crystals. Vanilla beans should be plump and supple and smell -  well, like vanilla. 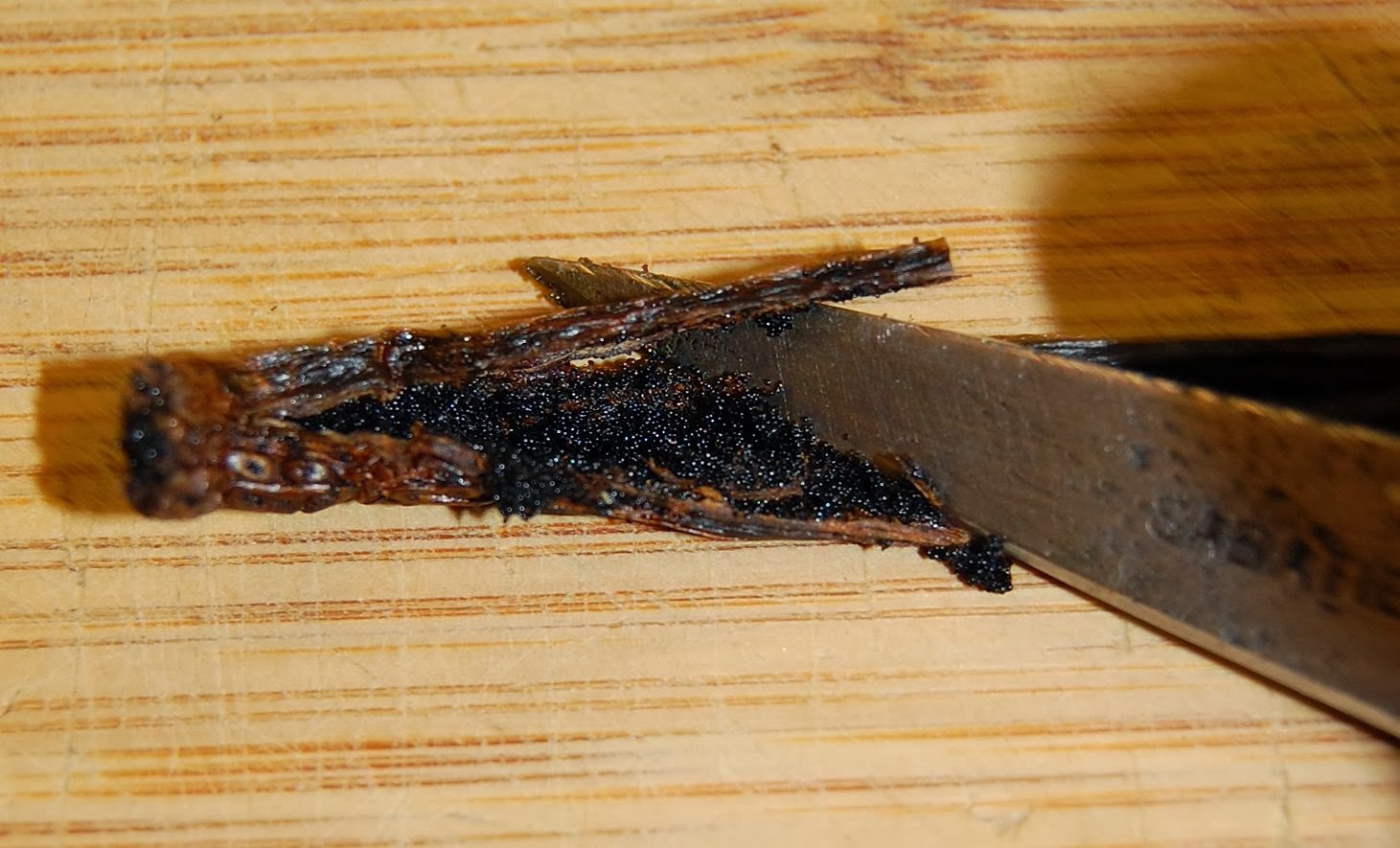 The choice of steeping alcohol is a matter of preference, but here too, it is better to use a high quality selection. If you wouldn't drink it, you probably would not want to cook with it either. We find the warm, honeyed flavor of bourbon to be the most complimentary option, but vodka, scotch or even rum would make excellent extracts as well.

It takes about 6 weeks for the alcohol to be fully infused with the flavor of the vanilla beans. If you are thinking about it, you might give it a healthy shake every week or so. Now, if like me, you just cannot resist tasting it after the first week, I can tell you that it still smells and tastes mostly like bourbon. The longer you let your vanilla steep, the better it will be. 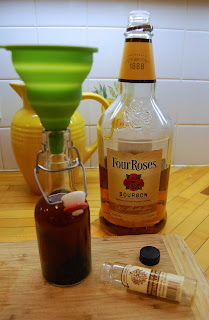 Clean and sterilize bottle(s.) Carefully slice the vanilla beans in half lengthwise to expose seeds inside.  Scrape out the moist seeds and place them in a clean bottle.  Add the scraped vanilla bean pod to the bottle as well.  Fill the bottle with the bourbon (or vodka, rum or brandy) making sure that liquid is covering beans. Add the sugar if desired.

Place the lid on the bottle and give it a good shake.  Allow the beans to steep for at least 6 weeks before using the resulting extract.  Vanilla extract can be stored indefinitely if kept airtight in a cool dark place.

It should be noted, too, that you can also make vanilla sugar by putting a split vanilla bean into a jar of white, granulated sugar. Vanilla sugar works well in any cookie recipe, but is best in a cup of cappuccino.