There are fewer meals more satisfying than a bowl of homemade soup on a cold winter day. Matzoh ball soup is commonly served at the Passover Seder, but is also eaten all year round. For neighbor and guest blogger, Ilene Benator, matzoh ball soup has healing properties beyond warming cold hands and noses, it has the power to melt hearts and heal souls. Here is her beautiful story and recipe:

Succulent broth and matzoh balls as big as my dad’s fist. Fluffy on the outside, the firmer center falls into the soup and softens in the hot liquid. This enjoyment of a family tradition was one of my favorite holiday memories. Sort of.

It was the time of year that chicken fat containers showed up in the fridge; because that was how my grandmother made it. I’m not exactly sure how or what she did with it, because my mother preferred to use the Manischewitz mix. With College Inn broth.

So my method is not exactly an old recipe passed down from generation to generation. But the result is the same - massive fluffy balls in a wonderful broth. I am more creative than my mom was, still using the mix as a base and making my own broth from scratch; only using the enclosed soup packet to boil the matzoh as an added way to get flavor. Recently, I started using smoked turkey legs to get an extra little bit of umami that makes the soup extra tasty.

But this story is not about my family’s tradition or secret recipe. It’s about what a soup means to a family. In my case, I married my husband after he lost his wife tragically from an illness that came on like the flu, but careened out of control into a condition that did not allow her lungs to get enough oxygen. I married into a family reeling from an unimaginable loss just eighteen months after she died.

While we were dating, I fully expected her family to be suspicious, cautious, and even hostile toward me. I met her father; my husband’s father-in-law, Richard, when on a trip with my now husband Seth. He was cordial and polite. This was as much as I could hope for under the circumstances, and I was fine with that. 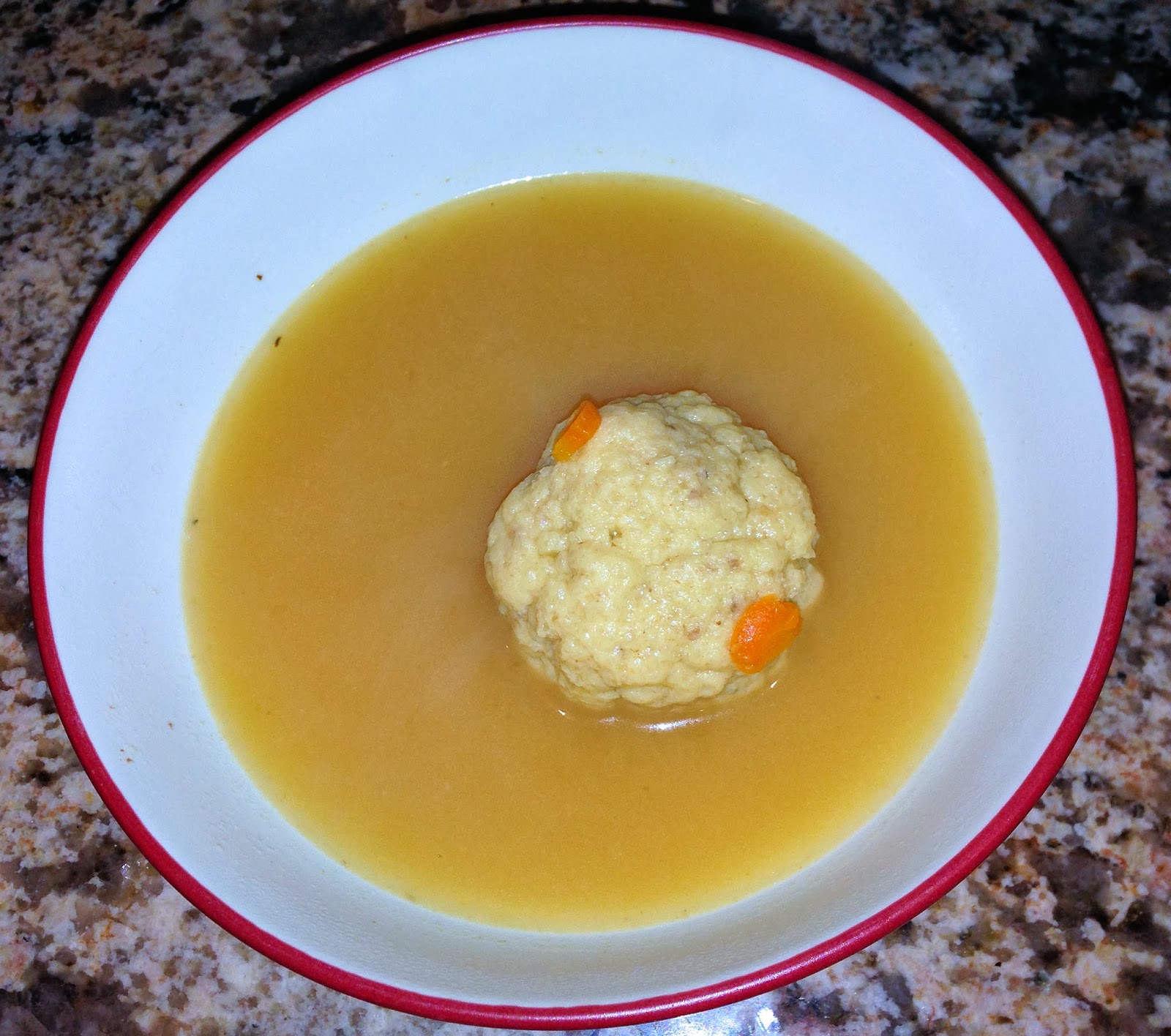 A few months later, Richard came in town for Passover. I observed the holiday more strictly than my husband’s family had previously; eliminating bread products and surviving on matzoh for the week. The Seders were over, but we invited him to our house for leftovers and my special matzoh ball soup.

The broth that melted away the firm matzoh shell, did the same for Richard. After his first bowl, he smiled at me. After the second, I was now a part of the family. The cement of the exodus became the glue of our own relationship. No longer was there any pretense. My traditions would become his grandchildrens’ traditions and this made him very happy.

A few weeks ago we lost Richard to the sands of the infinite, inevitable end.  He will always be with us though, as long as there is matzoh ball soup.

Simmer on medium, then low for at least 6 hours. Add water if level is low. Strain and extract liquid. Place in refrigerator until the fat congeals at the top. Skim off the fat and dispose (or save if you like to use rendered chicken fat for your matzoh balls or other recipes).

Cook on medium for one hour. Add some water or additional stock to replace steam, every fifteen minutes. After 30 minutes, reduce heat and simmer for 30 minutes. Do not salt and pepper to taste until after the full hour of cooking. 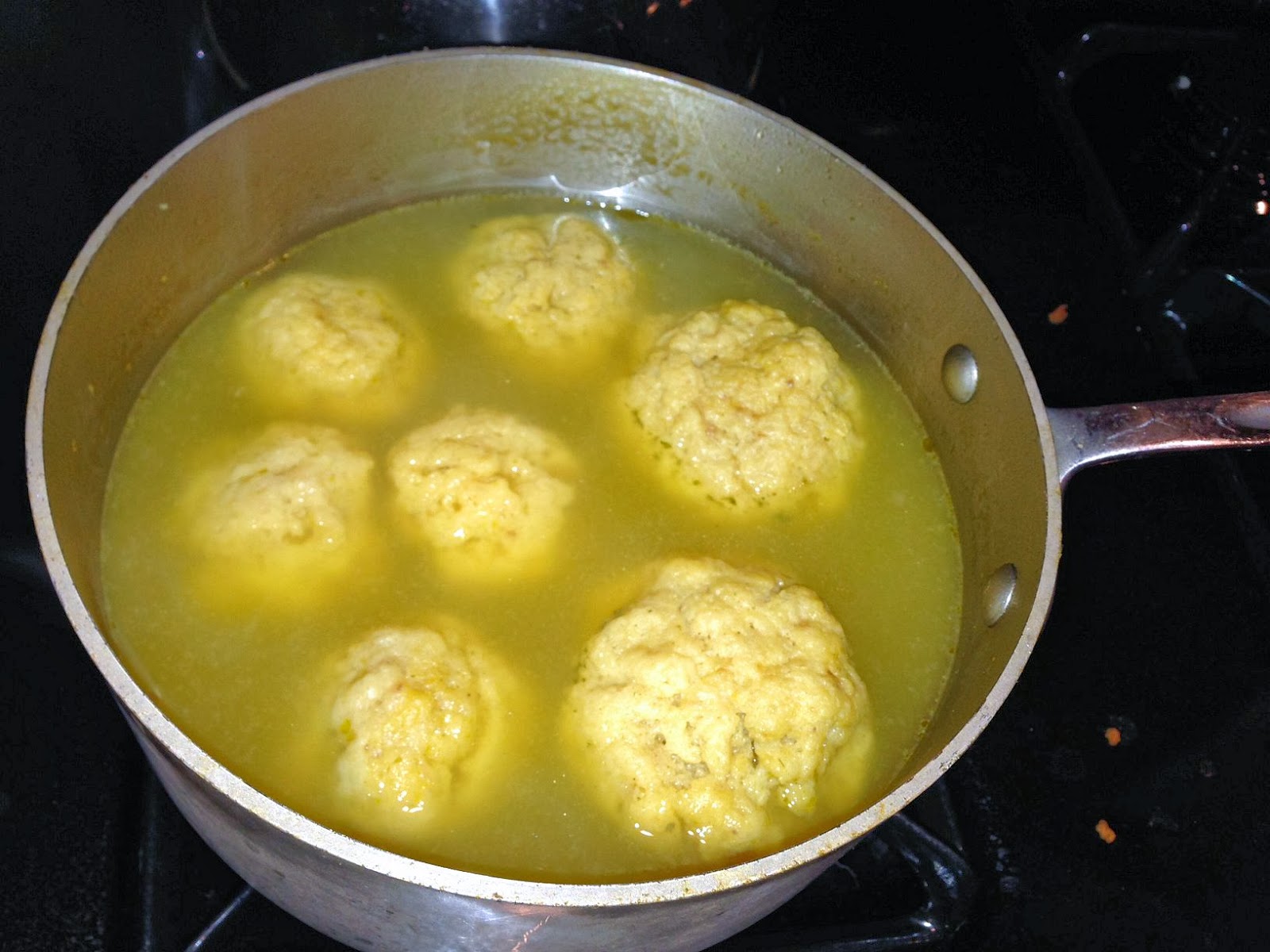 Using Manischewitz matzoh meal, prepare the dough according to the package instructions. Make sure to use extra virgin olive oil. It is the secret to fluffy matzoh balls. Form the balls carefully, being sure not to compress them too much. The package recommends 1-inch balls that should cook for 30 minutes. I prefer to make them 2 inches in diameter for huge matzoh balls, but it means cooking them for closer to an hour. Make a few extra to test doneness.

Take included soup packet and mix with boiling water in a large pot. Drop the matzoh balls into the boiling soup for five minutes. Cover and simmer on medium-low until expected time to assemble the soup for serving. By cooking the matzoh balls in the packet broth, they will soak up flavor from the broth, but will not make the servings cloudy.

Remove the matzoh balls from the package broth and drop into the actual soup and then cook over medium heat for another 5 minutes.

To serve, ladle 1-2 cups soup broth into bowls and add one matzoh per bowl. You can serve the soup with matzoh balls alone or with the addition of the chopped turkey leg. L'Chayim!