You can barely swing a strand of bead in New Orleans without hitting a shop selling pralines. For the uninitiated, a praline is a caramel-coated pecan confection with a consistency more like fudge than usual chewy caramel one might associate with a chocolate turtle.

The exact origin story of the praline is unclear. The candy was originally called “praslin,” after 17th century French diplomat, Maréchal du Plessis-Praslin, even though it was the marshal’s personal chef who first created the sweet made of almonds and some sort of creamy sugary caramelized coating. Interestingly, in Europe, the treat has evolved to an entirely different candy altogether. In Belgium and France, a smooth paste of cocoa blended with finely ground nuts that is used to fill chocolate truffles is known as a praline. 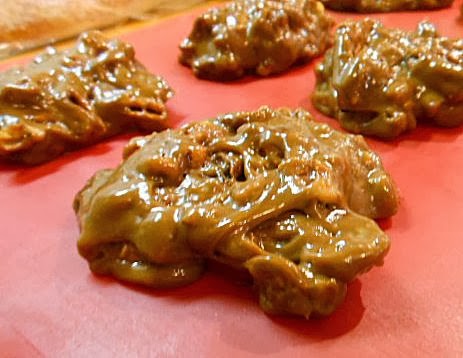 The praline that is familiar to most Americans, especially those that live in the South, is far closer to the original candy with only one major difference: they are made with pecans rather than almonds. Unlike, pecans, almonds are not indigenous to Louisiana. Using ingredients at hand, pecans began to replace almonds in many local dishes like sauces, stuffings, and cakes.

It is believed that pralines were brought from France by the Ursuline nuns, who settled in New Orleans in 1727. Through their evangelical outreach, the nuns took in young girls from unfortunate backgrounds. In the course of their scholastic and domestic instruction, the girls were taught the art of praline making. As these young women married and settled throughout Louisiana and other parts of the South, they spread the tradition of making pralines. 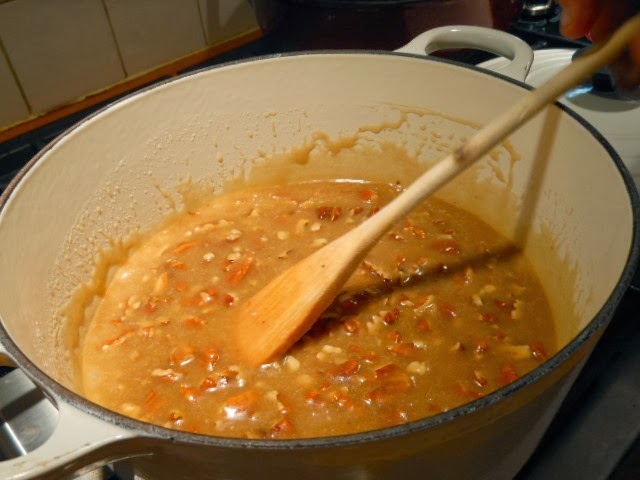 In a large heavy-bottomed pot, melt the butter over high heat.  As soon as the butter is melted, add both sugars, salt and cream and cook until the sugar dissolves, stirring constantly.  Next, add the milk and 1/3 of the pecans, cooking for 4 minutes more, whisking constantly.

Reduce the heat to medium and continue to cook, still stirring for 5 minutes.  Add the remaining pecans and bourbon and continue cooking and stirring until done, about 15 to 20 minutes more. If the mixture starts to smoke toward the end of cooking, lower the heat.

The trickiest part about making pralines is determining  the exact moment when they are done. Be careful not to get any of the mixture on your skin, as it sticks and can cause serious burns. If you are using a candy thermometer, the pralines will be ready when the thermometer reaches 240 degrees F. When nearly done, the batter will start to form distinct threads on the sides or bottom of the pan.

To test for doneness, make a small test praline every few seconds.  The early test pralines will be somewhat runny, very shiny and only somewhat translucent.  These early pralines will tend to be chewy rather than friable in texture. The ideal praline will be opaque, lusterless and crumbly instead of chewy. 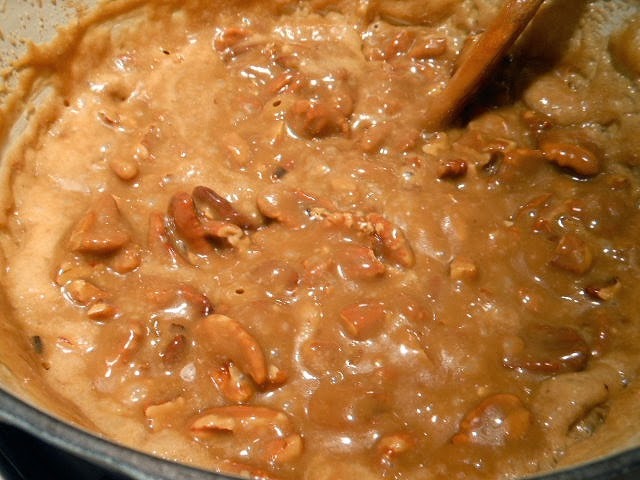 When you think the pralines are done, remove the pan from the heat.  Quickly and carefully drop the spoonfuls of batter onto the cookie sheet using the second spoon to scoop the batter off the first (we use a greased ice cream scoop).  Each praline should be a patty about 2 inches in diameter.  Allow them to cool completely and then store in an airtight container, or wrap each praline in plastic wrap or foil.

Many cooks avoid making pralines because the clean-up can be so daunting. So, once you have made all the pralines and take a good look around your kitchen, inhale deeply! Resist the urge to panic. First take the large pot and fill it with hot tap water, place all caramel-coated utensils and tools in the hot water and let it sit in the sink to dissolve all the sugars while you put everything else away. If you got batter on your counter tops, place a wet sponge or wet towel on the spot and let sit for a minute to melt. Remember that a creamy, nutty, cooled praline is your reward for cleaning the mess!