Peaches, peaches, peaches. The words “Georgia” and “peaches” are synonymous especially during the late summer months. This is emphasized by the fact that more than 70 streets in Atlanta have a variant of "Peachtree" in their name. Georgia's peach industry has a long tradition. The first peaches were planted in the state in the eighteenth century, when Franciscan monks introduced peaches to Cumberland and St. Simons islands along Georgia's coast in 1571, and by the mid-1700s peaches were being cultivated by the Cherokee Indians. Raphael Moses, a former Confederate officer from Columbus, was among the first to market peaches in 1851 and is credited with being the first to sell and ship peaches successfully outside of the South. 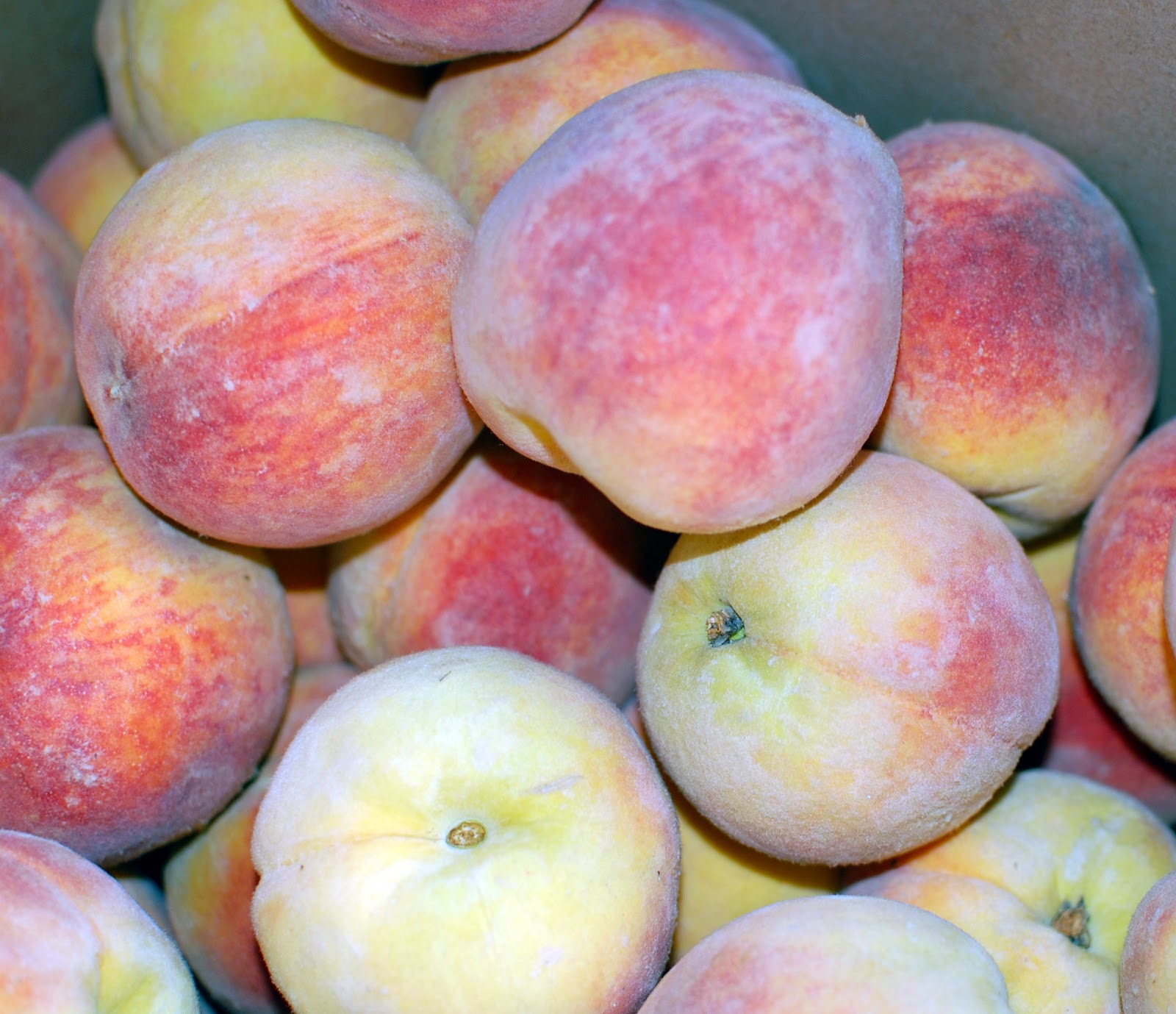 Currently, Georgia ranks third nationally in peach production behind California and South Carolina. Many of the peaches grown in the South are sold in the wholesale fresh market, with a small percentage sold at roadside markets and local farmer’s markets. We were fortunate enough to receive a box of gorgeous locally grown peaches from Watsonia Farms who frequent the Grant Park Farmer’s Market to sample and cook with. The first few were eaten straight out of the box on the way home! Yet nothing compares to a fresh peach pie. This version is rustic and unfussy with a whole wheat crust and complimentary almond. 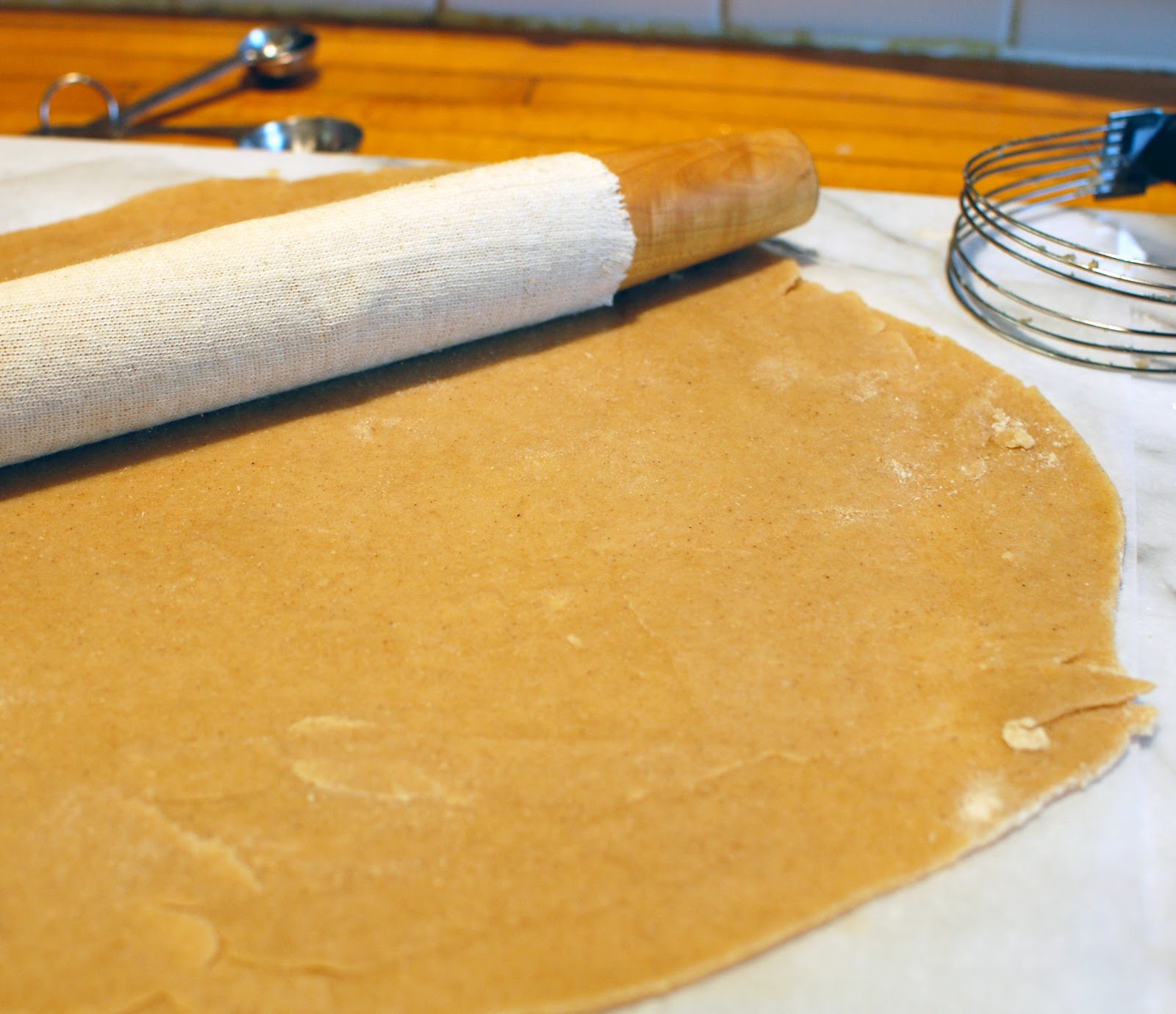 Sift flour and salt into a large mixing bowl. Cut butter into pieces and cut into dry ingredients until the mixture resembles a coarse meal with some pea-size pieces. Sprinkle water over mixture, one tablespoon at a time and knead lightly just until dough forms. If needed add more water one tablespoon at a time to the right consistency. Form dough into a ball.  Refrigerate the dough for 30 minutes before rolling out. Roll the dough ¼-inches thick into a large round approximately 12 inches in diameter.  If you have a bit of extra dough set it aside.

Line a baking sheet with parchment paper and transfer the rolled dough to the lined sheet. 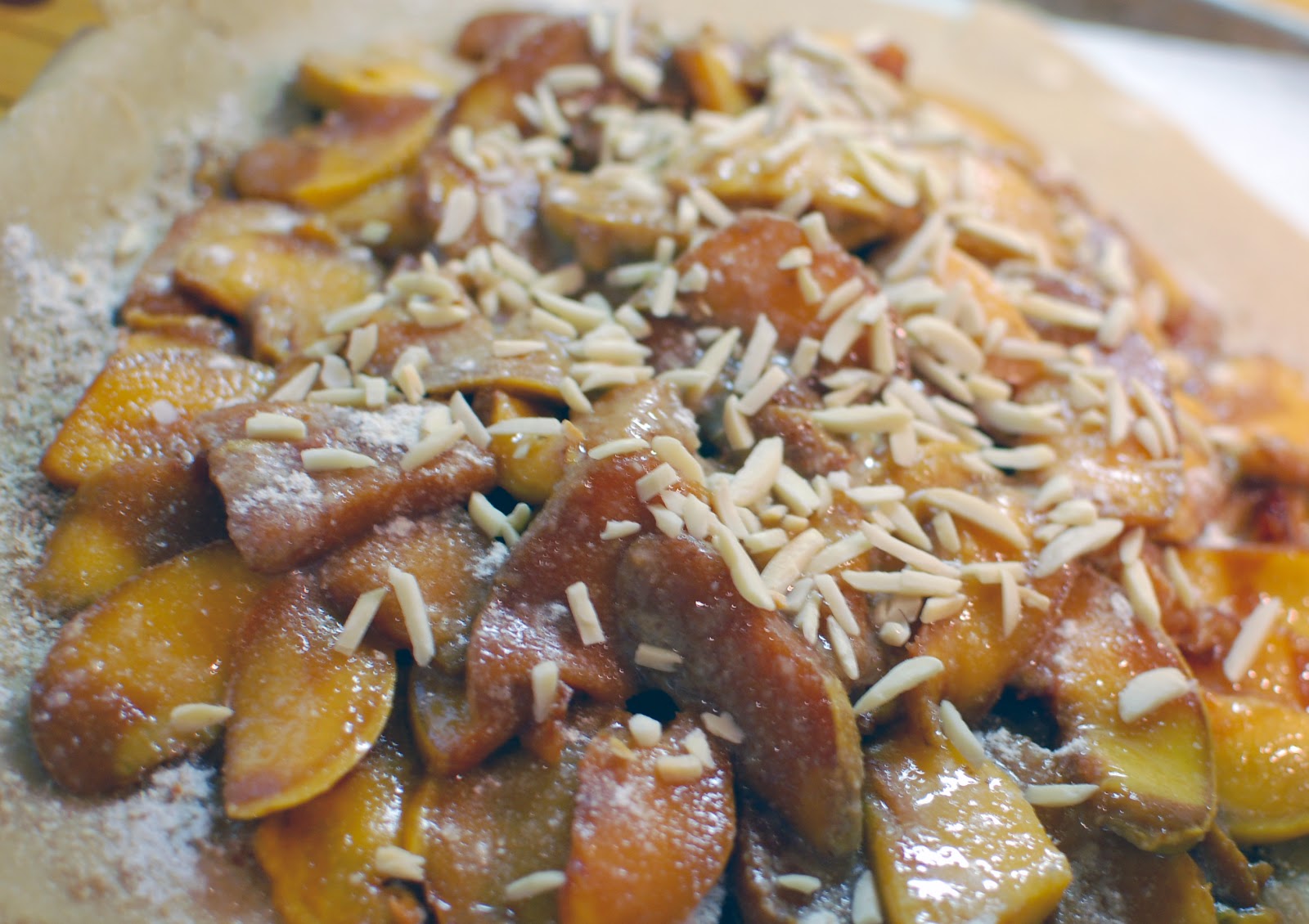 Preheat oven to 375°F. Line large baking sheet with parchment. Whisk almond meal, sugar, and salt. Sprinkle the rolled out crust with ½ of the almond mixture leaving a 2-inch border around the edges. 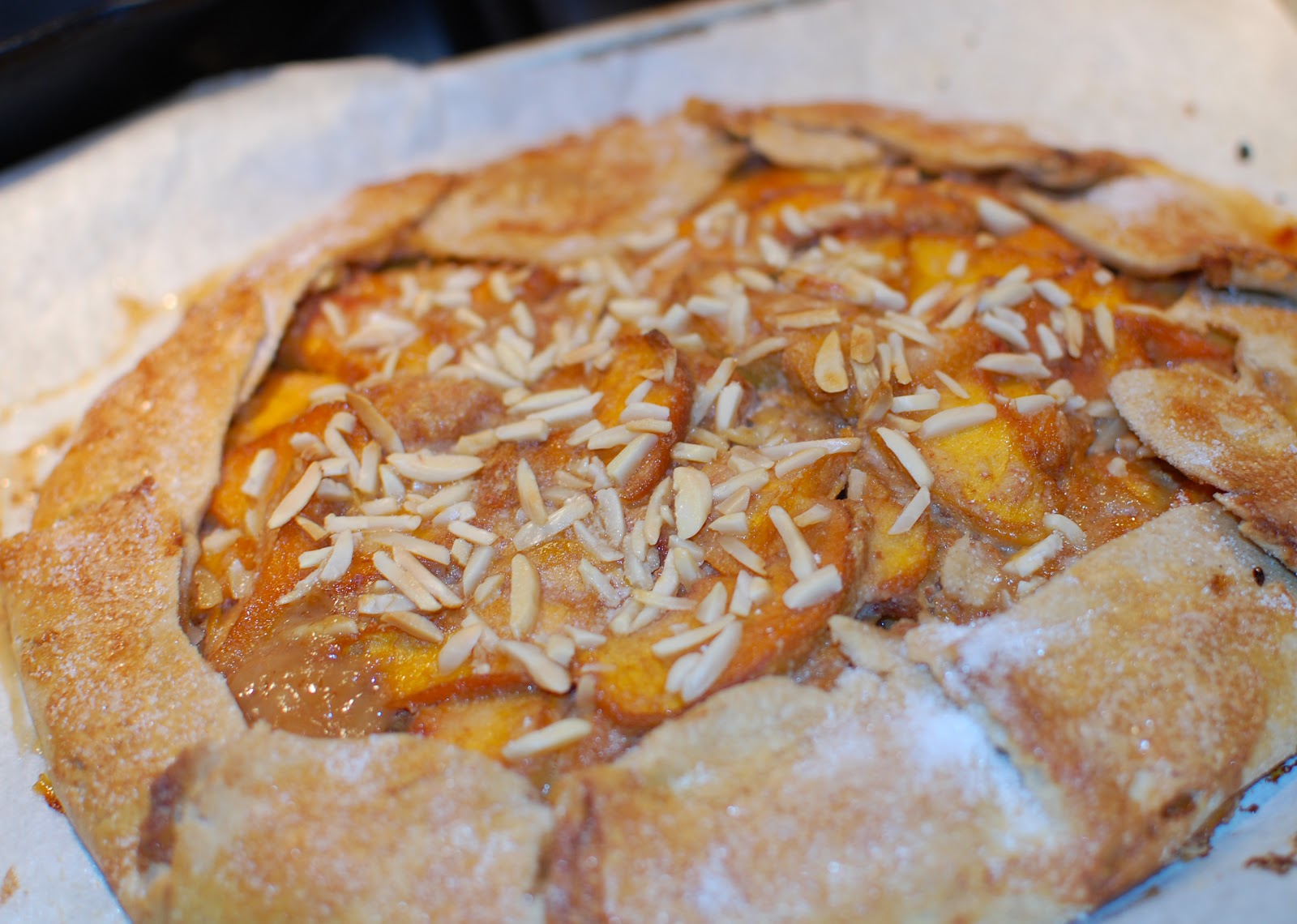 In a large mixing bowl, toss peaches with ¼ cup flour, cubed butter and the other half of the almond mixture. Mound the peaches in the center (on top of the almond mixture) leaving the same 2-inch. Fold crust up at edges, pleating as needed and removing straggling pieces adding to the reserved scraps. Sprinkle the top of the galette with sliced almonds.

Bake galette until crust is golden brown, peaches are tender, and juices are bubbling thickly, about 50 minutes. Transfer galette on paper to rack to cool. Cool completely before cutting into wedges and serving with whipped cream or ice cream.

Combine and roll out dough scraps to ¼-inch thickness. The shape does not matter. Sprinkle the top of the dough with cinnamon sugar and bake on the top rack of the oven for 5 minutes or until crust is lightly brown and the cinnamon sugar is bubbly.  Let cool and serve to kiddles (and husbands) who are impatiently waiting for the galette to be ready.