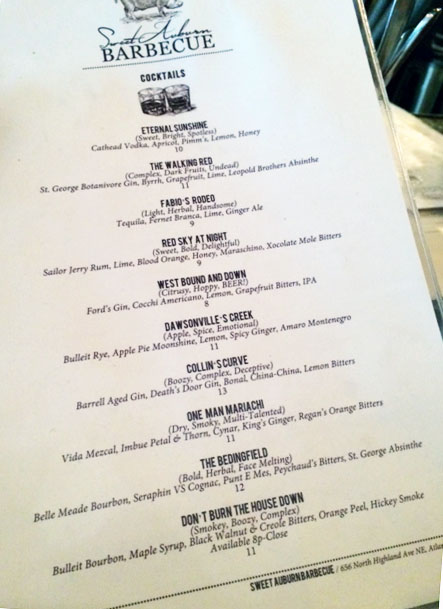 On a rainy evening after navigating Atlanta rush hour traffic, I found respite at new location of Sweet Auburn Barbecue in the former home of the once popular Pura Vida. I sat down and joined follow members of the Atlanta Food Bloggers' Society to decompress and enjoy some drinks and munchies. The drink menu is impressive and inventive with an interesting twist; the drinks are listed in order of their strength! I went with the middle-of-the-road “Collin S Curve” made with barrel-aged gin, Death’s Door gin, Bonal Gentiane Quina, Bigallet 'China-China' and Lemon Bitters.

We were all wowed by the tableside performance as one member of our party order a “Don’t Burn Down The House” which involved the charring of a plank of hickory with a torch and then placing a glass upside down over the smoldering wood to capture the smoke. Once fully infused, a mixture of Bulleit Bourbon, Maple Syrup, Black Walnut & Creole Bitters was poured into the still smoking glass and garnished with a twist of orange peel.

As we sipped and chatted several plates arrived at the table starting with a Sweet Auburn country picnic plate with shaved Benton’s country ham, homemade pickles, homemade pimento cheese, candied bacon, crostini and lavash. The house made pickles and the candied bacon were the standouts of this menu item. Smoked chicken wings, tossed in “Wu Tang” sauce were bursting with flavor. The meaty wings with just the right amount of heat in the sticky sweet soy sauce and crazy crispy! These disappeared before I could even think about snagging a second one.

Next came a tray of signature Pimento Cheese Wontons which were served blazing hot. Waiting just long enough for them to cool ever-so slightly so as not to completely burn our mouths, we bit into the super crispy bites to the find cheese mixed with housemade bacon marmalade for a rich, creamy and salty flavor. A dip in the sweet Thai chili sauce brings the sweetness making for the perfect combination of sweet and salty. It came as no surprise when the Chef informed us that they make about a 1,000 a day. (Yes, that's three zeros.) 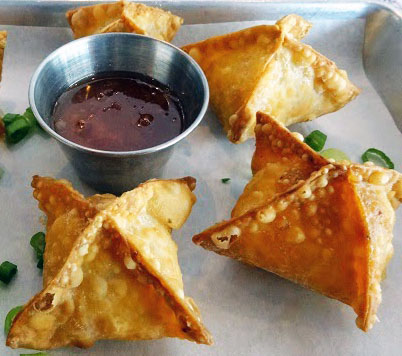 The adorable Chef Tiny could be seen sheepishly peeking through the kitchen doorway gauging our reactions to his creations. We invited him to the table and he chatted about making pickles and his secret Asian fusion sauces. He was very intent on making sure we enjoyed every morsel and eagerly sought our recommendations for improvement, of which we had none.

With ample parking available across the street, this Poncey-Highland spot is the perfect retreat for cocktails and nibbles after a hard day of work. We cannot wait for the chance to come back one afternoon to try some of Chef Tiny’s brisket and other barbequed specialities.


Disclosure: While the menu items we sampled were complimentary, the opinions included herein are honest and unsolicited. 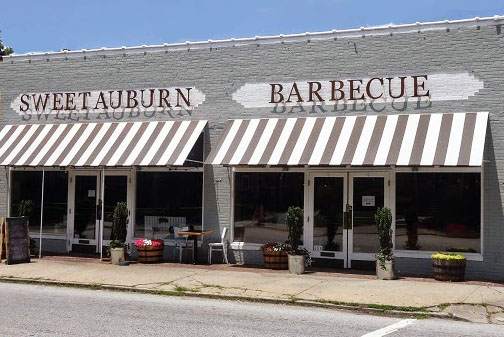