Saturdays usually provide an opportunity to sleep a little later and linger over coffee and the newspaper, yet this morning I was up and out early so as not to lose my reserved seat at The James Beard Foundation’s Taste America® cooking demonstrations at the Sur La Table store located in North Point Mall.

Taste America® All-Star Chef Barbara Lynch, winner of the 2014 James Beard Foundation Outstanding Restaurateur award, was the featured chef for the morning’s program activities. As we were lead into the demonstration kitchen, we could see chef Lynch’s mise en place of fresh clams and what looked like a large mixing bowl of canary yellow frosting which aroused everyone’s curiosity. 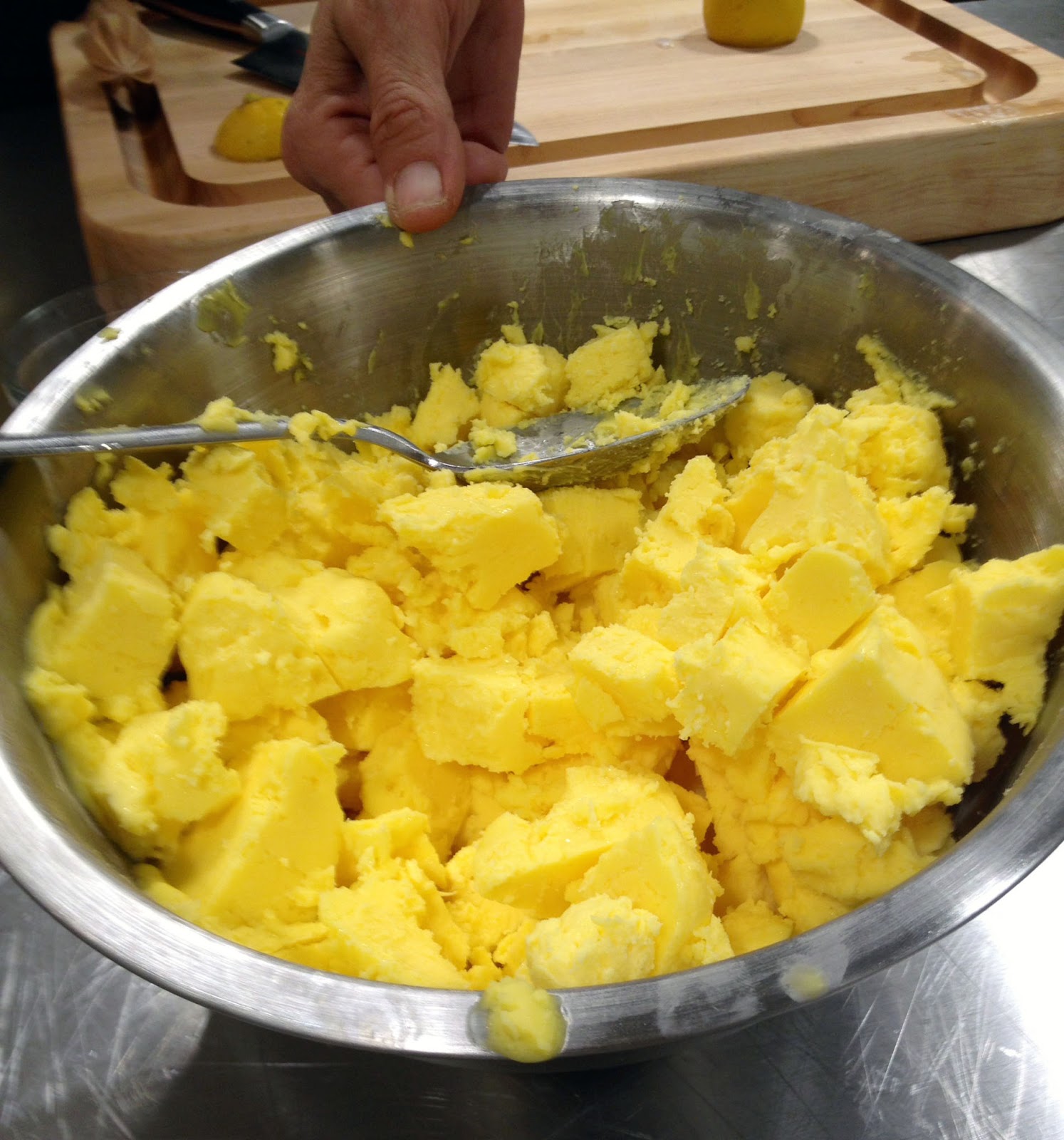 The mystery was solved when Chef explained that she would be making her signature “Butter Soup” to be served with shellfish and a honey milk foam. What we had mistaken for frosting was fresh artisanal butter from Diane St. Clair’s Animal Farm in Orwell, Vermont. “This is the most amazing butter you will ever taste. I even know the name of the cow it came from; her name is ‘Hopi’!” Chef started the soup base by melting butter with water in the style of a traditional Buerre Monté sauce. Solid butter is an emulsification of butterfat, water, and milk solids. Beurre monté preparation is a way to manipulate the emulsification into a liquid form by adding a small amount of water to chunks of butter and whisking over moderate heat, the melted butter remains emulsified.

While the seafood was gently steamed and the beurre monte warmed, Chef Lynch made a honey milk foam by warming milk in a saucepan with honey until the honey is dissolved. The honey milk is added to a mixing bowl with an egg yolk and pulse with an immersion blender until foamy. If you do not have an immersion blender a regular blender or even a whisk will work just fine.

To prepare the shellfish, remove tail and claws from the lobster body (save the body for another use). Steam the tail for 5 minutes and the claws and knuckles for 6 minutes and immediately place in an ice water bath to shock. Once cool enough to handle, remove the meat and chop into bite-sized pieces, set aside, and discard shell. 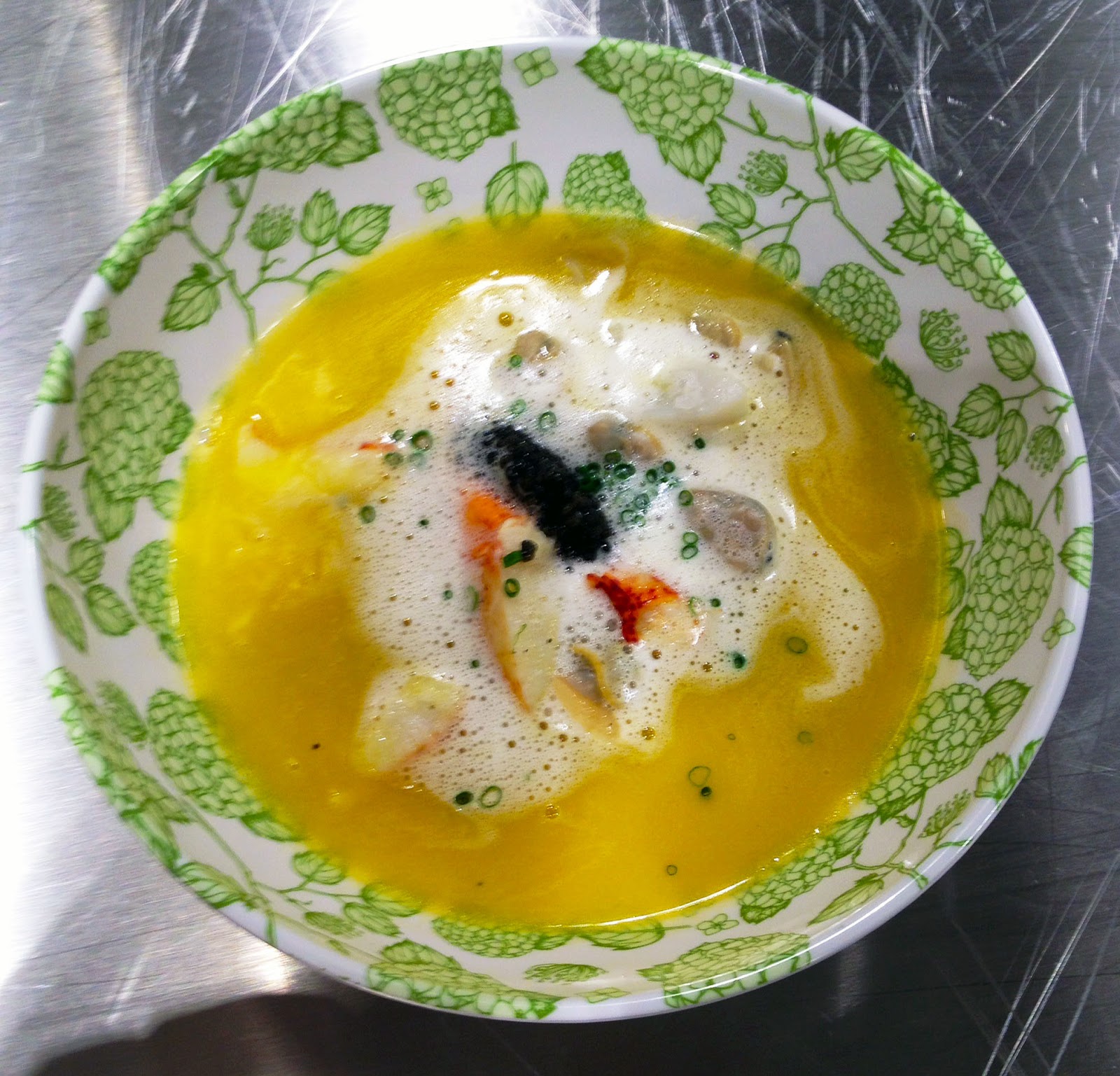 Steam the mussels and clams in a covered pot with ¼ cup boiling water until just open. Remove with a slotted spoon and allow the shellfish to cool just until you are able to handle them. Remove the meat from the shells, set aside, and discard the shells.

In a medium sauce pot, bring 5 tablespoons water to a boil. Reduce heat to low and slowly whisk in the chilled butter, 2 tablespoons at a time, until emulsified. Add the lemon juice to the butter mixture and salt to taste. Hold over low heat. Do not allow the butter mixture to come to a boil or it will separate. If the soup 'breaks," whisk in more warm water and stir until re-incorporated. Add the crabmeat, lobster, mussels, and clams to the warm butter mixture and heat gently all the way through.

To make the honey milk foam, pour honey into 1 cup warmed milk and stir to combine. Whisk in an egg yolk and using an immersion blender, blitz mixture until foamy.

Using a slotted spoon, divide the shellfish equally among 4 small warmed soup bowls. Pour butter soup over the shellfish to cover (approximately 3 tablespoons for each serving; there will be some leftover which can be refrigerated and gently reheated for future use. 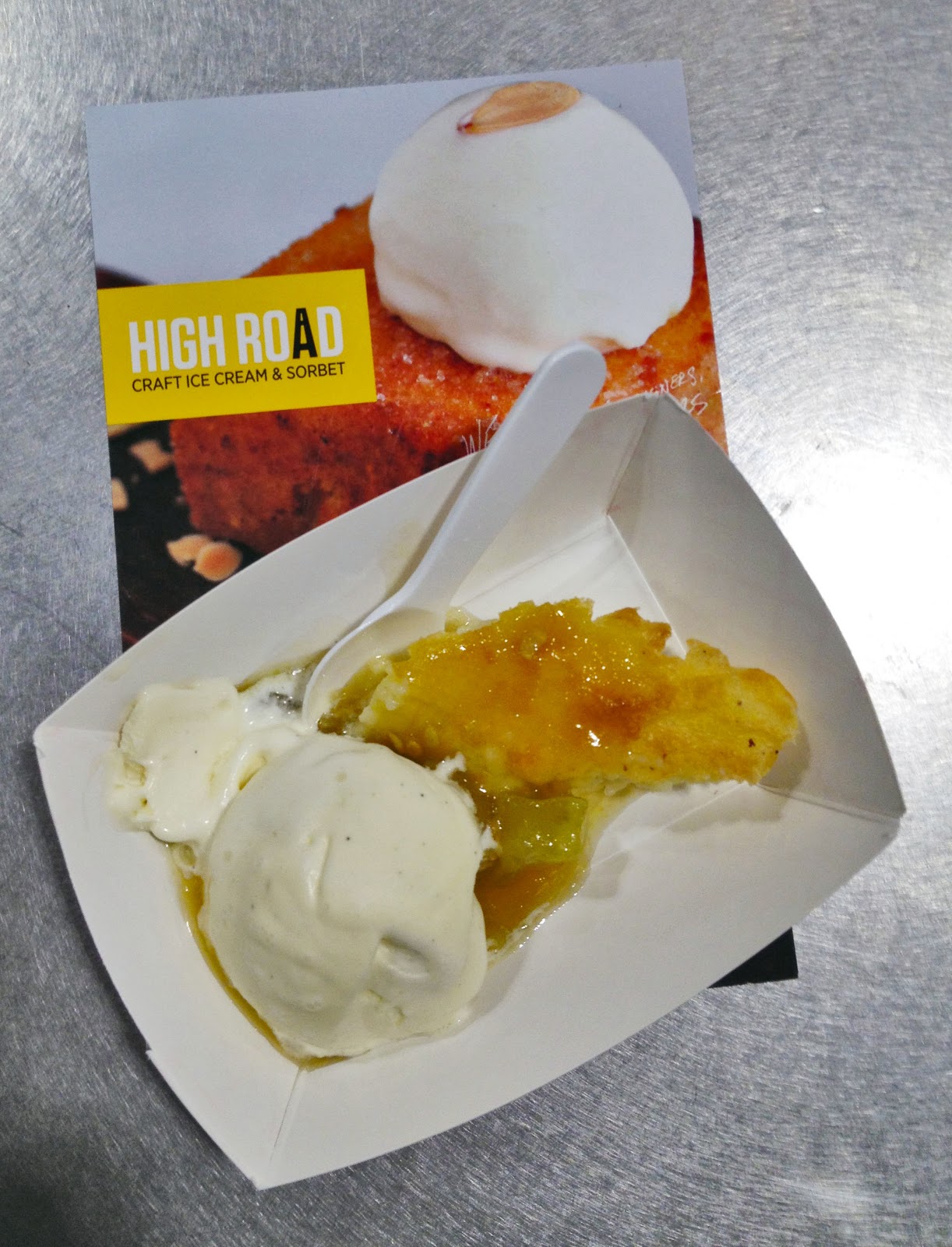 Garnish the soup with 1 teaspoon honey "foam," a small scoop of black caviar, and sprinkling of chopped chives (if using) and serve immediately. You may wish to have extra napkins on hand for those who simply cannot resist the urge to lick the bowl to get every last droplet!

And as if Chef Lynch’s Butter Soup was not decadent enough, High Road Craft Ice Cream was on site dispensing corn meal spoon bread and tomato marmalade with scoops of their sinful Vanilla Fleur de Sel ice cream as part of the Taste America® mission to showcase local artisanal flavors.