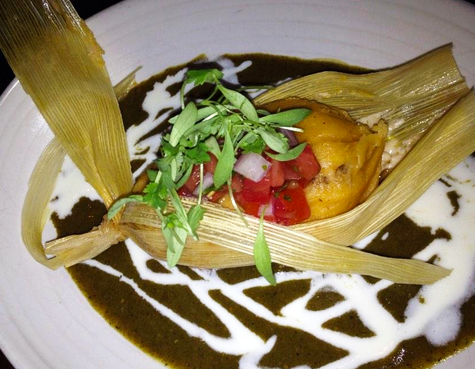 We arrived at Alma Cocina at the prescribed time where we met our handlers from Brave PR and were lead to our table where we were given our directives. The mission: five teams embark on a clandestine operation from their assigned checkpoints to four surreptitious locations to sample the goods and report back to our respective followers on the upcoming Taste of Atlanta 2014. I (along with two other operatives) had been assigned to team “Downtown.” We ordered drinks from a list of carefully crafted libations and exchanged bona fides.

I ordered an “Italian Tourist” while my comrade tried “A House in the Hamptons” both of which suited our palates nicely. As we were consulting our ciphers for the ELINT on Twitter, our inside man, Chef Chad Clevenger, brought out a tray of Chicken Tinga Tostadas and a platter of Fried Avocado tacos with poblano pesto. Those were soon followed by Chef’s signature Pork Pibil tamales, which he was keeping under wraps (of corn husk that is.) 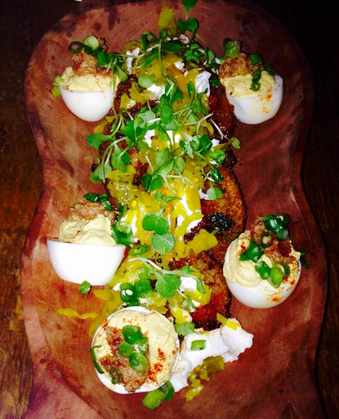 As we were finishing our surveillance activities, our Controller contacted our transport agent from Uber to take us to our next target. We soon arrived at Smoke Ring where we were presented with Wine & Shine Sangria made especially for the arrival of our team. A salver of delectable deviled eggs and fried green tomatoes with goat cheese were set on the table. A bang and burn was carried out just in time for pork belly burgers with caramelized onions, melted Fontina, and secret recipe Steak Sauce along with another original concoction, “The Modern” to be brought for our consideration. The darling owners of the establishment, Erin and Jordan Wakefield made an appearance at the table to provide intelligence on the site and the items we were sampling making us feel that we had entered their home rather than their eatery. They seemed unconcerned by our cloak and dagger operation.

Again, our Controller arranged transport and within moments we were whisked away. We exited the Uber vehicle and entered the W Atlanta Downtown and were escorted into a private dining room at BLT Steak. We all were made to feel as members of the Royal family and were concerned our covers had been blown, until we were assured that everyone is treated in this manner at this venue. 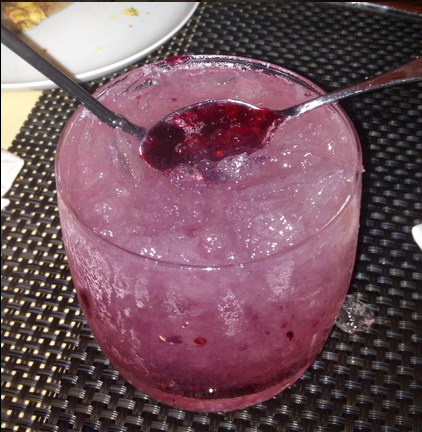 We were served a chicken liver mousse with grilled country French bread, “obnoxious” popovers (the term used by our confidential informant), perfectly cooked steak with a luxurious corn compote (which will be the sample to be shared at TOA) and my favorite libation of the evening, which I will call the “Gin Jammer” for purposes of this report. An impressive parade of assets introduced themselves to our party describing various aspects of the location including Chef Joseph and Pastry Chef Sarah whose mini carrot cakes and chocolate chip petit fours were truly icing on the cake.

We were facing palate fatigue as we boarded yet another vehicle in the Uber fleet to descend upon our final covert objective. As we pulled up to Max Lager’s, we entered with new strength and resolve. There was food and beverage here that must be consumed in order to complete our assignment. Our unit would prevail! As we passed giant copper tanks and industrial milieus, we found ourselves seated at a comfortable table with rowdy conviviality in the background. We found ourselves facing an almost insurmountable task: to drink six beers of varying flavors for the sake of recording our findings for our cohorts. Bowls of creamy, perfectly textured grits with shrimp in a spice-filled gravy made a good backdrop to assess the malted beverages.

Just as we thought our mission was complete, a tray of fried cheesecake morsels was presented for our trial. Although we thought we might burst, we sacrificed ourselves for the sake of research and dove into the decadent nuggets, obliterating all evidence of their presence.

Our handlers, gathered the team and ushered us back to our original launch point. Once there, we vowed to maintain contact before parting ways and returning to our respective agencies.

The Take: Atlanta’s biggest foodie festival, Taste of Atlanta literally hits the streets at Spring Street and 5th from Friday, October 24th through Sunday, October 26th. This year, restaurant booths will be grouped by neighborhoods including Downtown, Midtown, Buckhead, Virginia-Highlands and Decatur.

The agents assigned to team 'Downtown" are confident that you will find the offerings of Atlanta’s downtown restaurant district to be outstanding examples of the amazing menu items offered throughout our fine city! And, since we know that given this inside information, you will purchase tickets to this event post haste, we are offering you our top secret code; enter promo code “TWEET” when ordering your tickets at TasteOfAtlanta.com and receive a $5 discount on General Admission or VIP tickets until October 20th.