Garlic’s history goes back some five thousand years, making it one of the oldest cultivated vegetables. The ancient Egyptians worshiped it as a God, its name invoked at oath taking. And the pyramid builders, although savage taskmasters surrounded them, actually went on strike when deprived of their ration. Others who complained bitterly of garlicless days were the wretched Israelites, wandering in the Sinai desert with nothing but boring old manna to keep them from starvation. Instead of rejoicing at their escape from Egyptian bondage, they thought longingly of the spicy foods they had left behind. Among the Egyptians, garlic’s value was such that fifteen pounds of it could buy a healthy male slave. The Romans called it “the poor man’s treacle”; and in Provence it was nicknamed “the poor man’s truffle.” 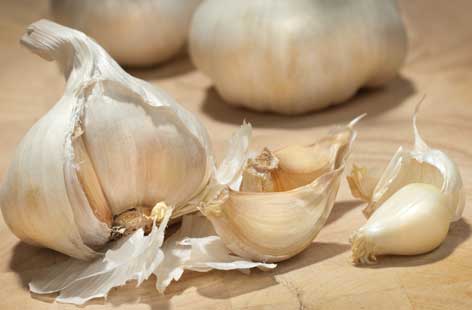 A native of Asia, probably introduced to Europe by the returning Crusaders, garlic went from strength to strength. Medieval medicine men believed that the fiercer the aroma of a plant, the more effective it must be; hence garlic was recommended for every ailment from the common cold to unrequited love. Leafing through the yellowed pages of our medical volumes we find it alleged to cure high blood pressure, rheumatism, loss of appetite, lung trouble, toothache, freckles, snakebite, whooping cough, and baldness. The versatile remedy wasn’t just for eating: sometimes a poultice had to be put into an ear or on a tooth, laid on a baby’s navel, or applied to the soles of the patient’s feet. This last, which recurs in many treatments, seems ludicrous, but we are assured that the volatile oils in garlic are so readily absorbed that if a small piece is rubbed on the soles of the feet a garlic-laden breath is instantly exhaled by the lungs.

Cooking directions for garlic vary from the ladylike instructions to rub the salad bowl and then throw away the clove, to the crudely ingenious method recommended by the eccentric Italian Francatelli, who used to chew a clove of garlic and then breathe gently over the salad. (He was chef to Queen Victoria: do you suppose she knew?)

The vexing question of garlic on the breath has never been resolved. Etiquette books have suggested using mouthwashes, chewing parsley, and the like, but it doesn’t make a bit of difference, for the fumes of garlic don’t cling to the mouth and teeth, but are exhaled by the lungs. (It was claimed that King Henri IV of France, a passionate garlic fancier, used to crush several cloves between his teeth, and could then fell an ox with one breath—a stupendous achievement, not especially useful in modern life.) There is a theory that if you eat enough garlic, your system will learn to assimilate it and you will cease to exude the odor. Believe it or not, even though we cook with enough garlic to keep vampires away for all eternity, we still have not eaten so much to have proven this theory!

The only answer for affectionate garlic lovers who want to embrace is for both of them to eat the gorgeous stuff. The alliophobe who is revolted by it, and the alliophile who adores it, are clearly mismatched. Their religions and their politics can differ without mishap, but every intending couple ought to make sure their feelings about garlic coincide remembering together the words of the great chef Marcel Boulestin, “Peace and happiness begin where garlic is used in cooking.”

Preparing garlic for cooking is very easy. For the best tasting results, peel each individual clove of garlic and nip the hard end off. Cut the garlic in half and remove any green sprouts that might appear in the center. You are now ready to use your garlic. A majority of recipes call for the garlic to be “minced” or “smashed.” Personally I like French chef Edouard de Pomiane’s robust command: “With one blow of your fist, crush cloves of garlic beneath the blade of a knife.” Using the flat part of the knife blade, mash and crush the garlic with a teaspoon of salt until a paste is formed. The salt absorbs the oil and softens the raw flavor of the garlic, which can sometimes have a very strong taste when it is not to be cooked before it is eaten.

Most cooks however, prefer not to be so “personal” with their garlic, which is where a garlic press comes into play. A garlic press quickly extrudes the garlic cloves into a mince or paste that can be directly added to a pan to cook without involving knives or dirtying cutting boards. There are a variety of garlic presses on the market some that work better than others. 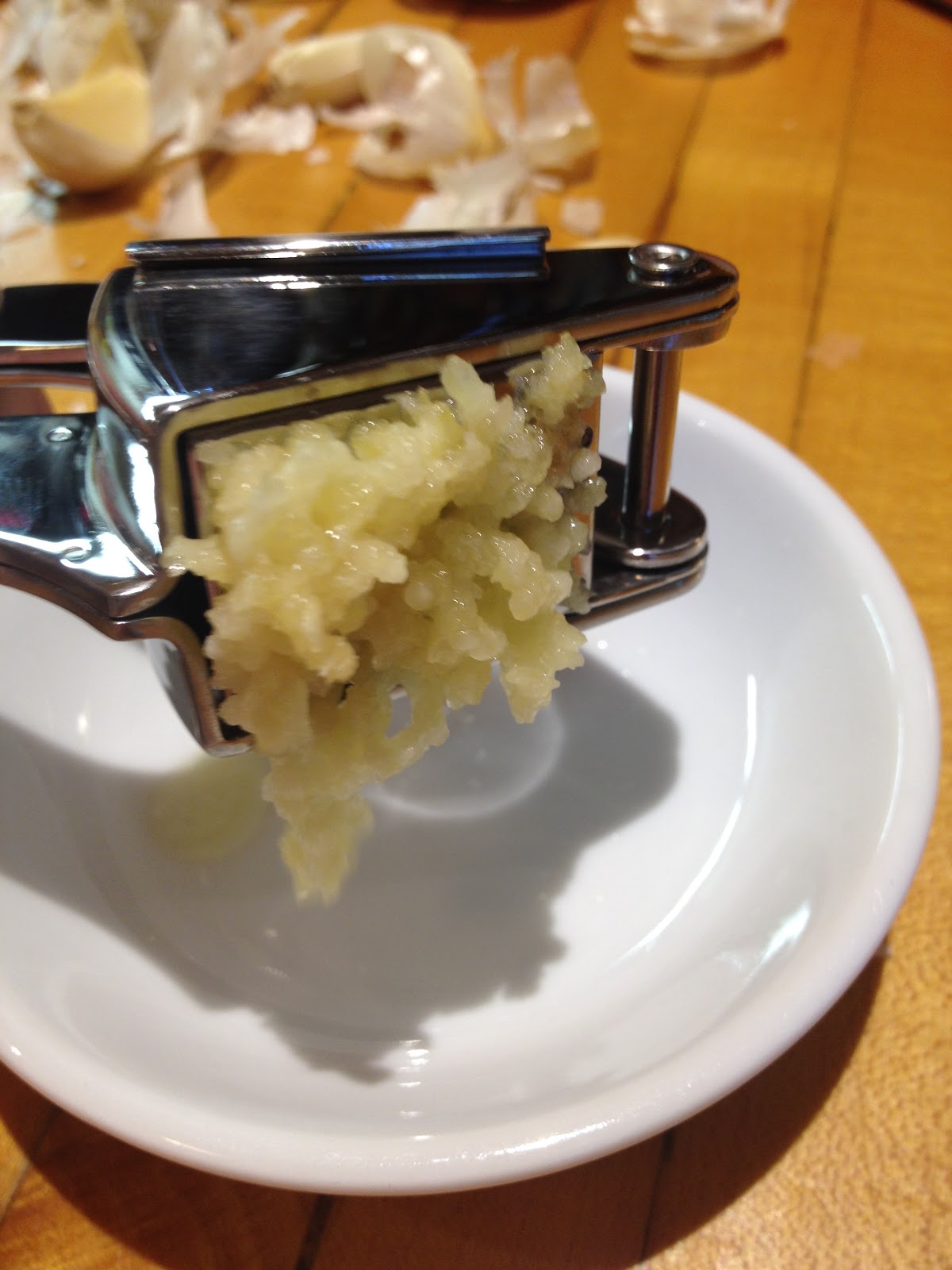 In choosing a garlic press you should consider the material it is made of, its capacity, and how easy it is to clean. Stainless steel is possibly the best and the most durable material available on the market. Stainless steel does not rust and does not 'peel' or get dull even after repeated use. (Stainless steel is also purported to remove the smell of garlic from your hands if held while washing up, so cleaning the press helps santitize your hands.) A garlic press that can hold several cloves at once is preferable than smaller garlic presses, and a press with an ergonomic soft grip makes pressing garlic easier and more comfortable. Selecting a press with a built in (or even separate) cleaning device to remove the garlic bits that are stuck in the holes is highly recommended. 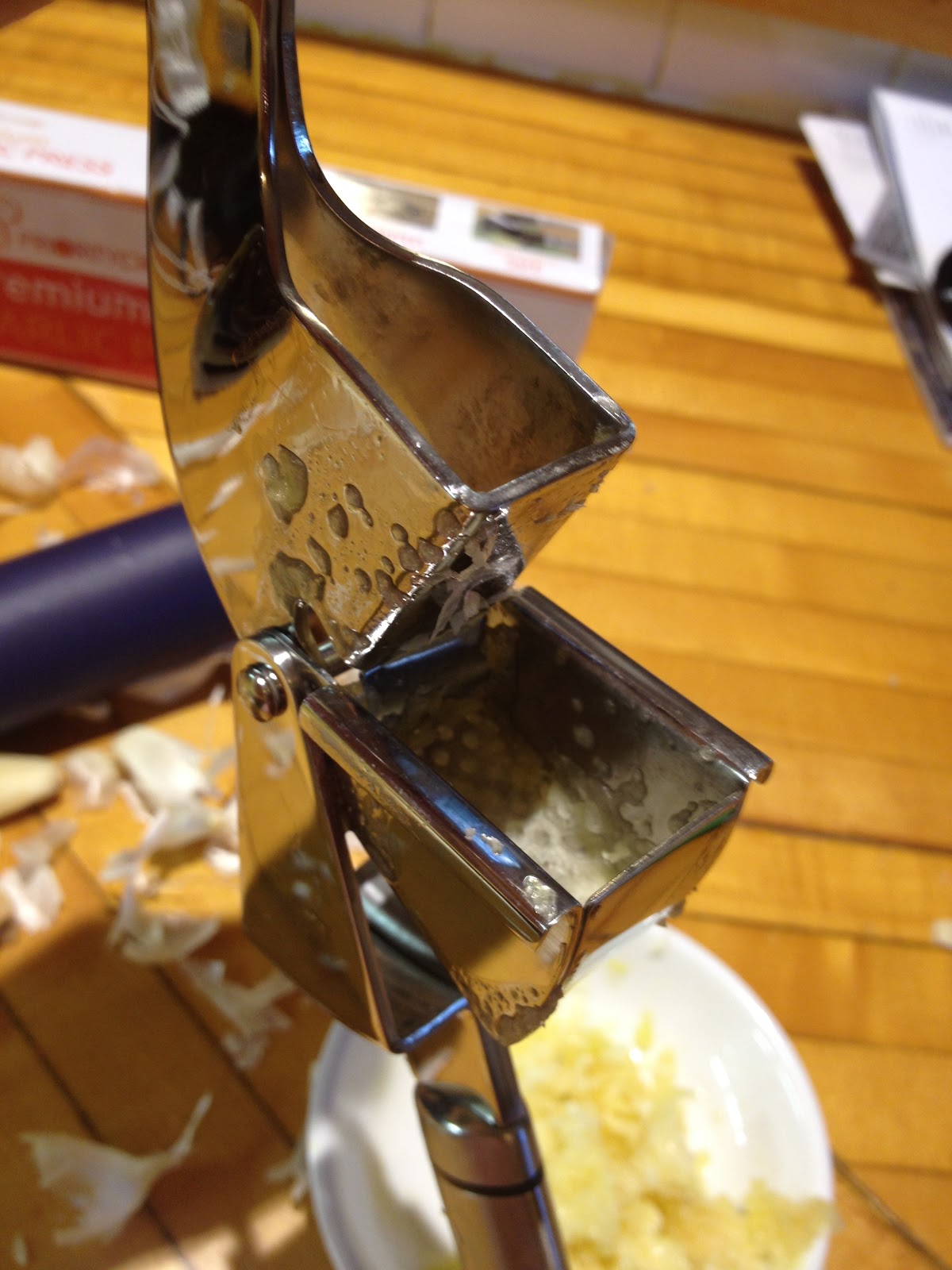 We recently received a Priority Chef Premium Garlic Press to review. The press is made of 18/10 stainless steel, is dishwasher safe and comes with a lifetime warranty. It is heavy duty with rounded 4” comfortable handles. The bowl is generously sized to hold two small or one large clove of garlic. The plunger fits snugly but does allow a bit of garlic to escape up the sides. The press extrudes the garlic nicely and the bowl swings freely to allow for better cleaning. My only real complaint is that while the press is fairly easy to clean, it does not come with a cleaning attachment with prongs that can be inserted in the holes to remove any leftover garlic. The price of $16 is certainly reasonable given the high quality of this press.

Now what to do with that smashed garlic: 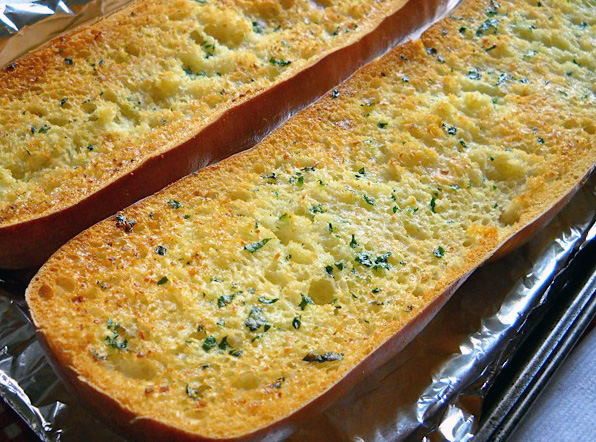 Fisherman’s Wharf Garlic Bread
Smash 2-3 cloves of garlic and mix with 1/2 cup softened butter. Split a loaf of French or Italian bread horizontally and spread both sides liberally with garlic butter. Sprinkle the bread with finely chopped parsley (optional). Put the bread on a baking sheet and heat it in a 425° F oven until the butter is sizzling and the garlic is lightly toasted, or brown it lightly under the broiler. Be prepared to arm wrestle anyone who tries to take the last slice.

I received the Priority Chef Garlic Press mentioned above for free using Tomoson.com. Regardless, I only recommend products or services I use personally and believe will be good for my readers. 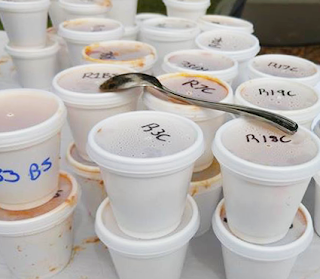 Advice for Judging a Chili Cook-off

I had the honor of serving as a judge for the 4th Annual Brookhaven Chili Cookoff yesterday. I arrived early to the sight of a tent village with chili-scented steam billowing overhead. With no further ado, I was shown to a table and asked to rate the chili (and Brunswick stew) samples of 18 of Atlanta’s top restaurants including There Brookhaven, Smokebelly BBQ, Seven Lamps, and Farm Burger from 1 to 10 with ten being the best. I was quite happy that I had done some homework before my stint. According to the experts, chili should be judged on the following criteria:
Color – The chili should look appetizing. Aroma – The chili should smell good. The aroma is usually a good indicator of the taste.Consistency - Chili should have a good meat to sauce ratio.  It should not be too thick, watery, grainy, lumpy, or greasy.  Taste – The chili should taste, well, like chili. And, it should taste good. This is THE most important factor. The taste should consist of the combination of the meat, spic…