What do you get when you cross an “Iron Chef”-type cooking competition with a gritty Fight Club-esque setting? You get a hipster pop-restaurant with three chefs matching skills for a chance to contend in the 2015 World Food Championships in Kissimmee, Florida.

Culinary Fight Club, which began as a fundraiser for Fight2Feed, a Chicago non-profit organization with the mission to end to hunger, has become an overnight success in its home city of Chicago. Since December 2013, Culinary has hosted 14 monthly challenges in Chitown and has selected Atlanta as the second city in their ambitious plan to have competitions in four states by 2017. The inaugural Culinary Fight Club - Atlanta was held at the Doubletree in Buckhead with challengers Chef Rich Green, Executive Chef of the Buckhead Doubletree; Andrew Tokas, Co-owner of Domaine Wine Distributors; and, Sophia Lin Kanno, Legendary Events Design Expert. 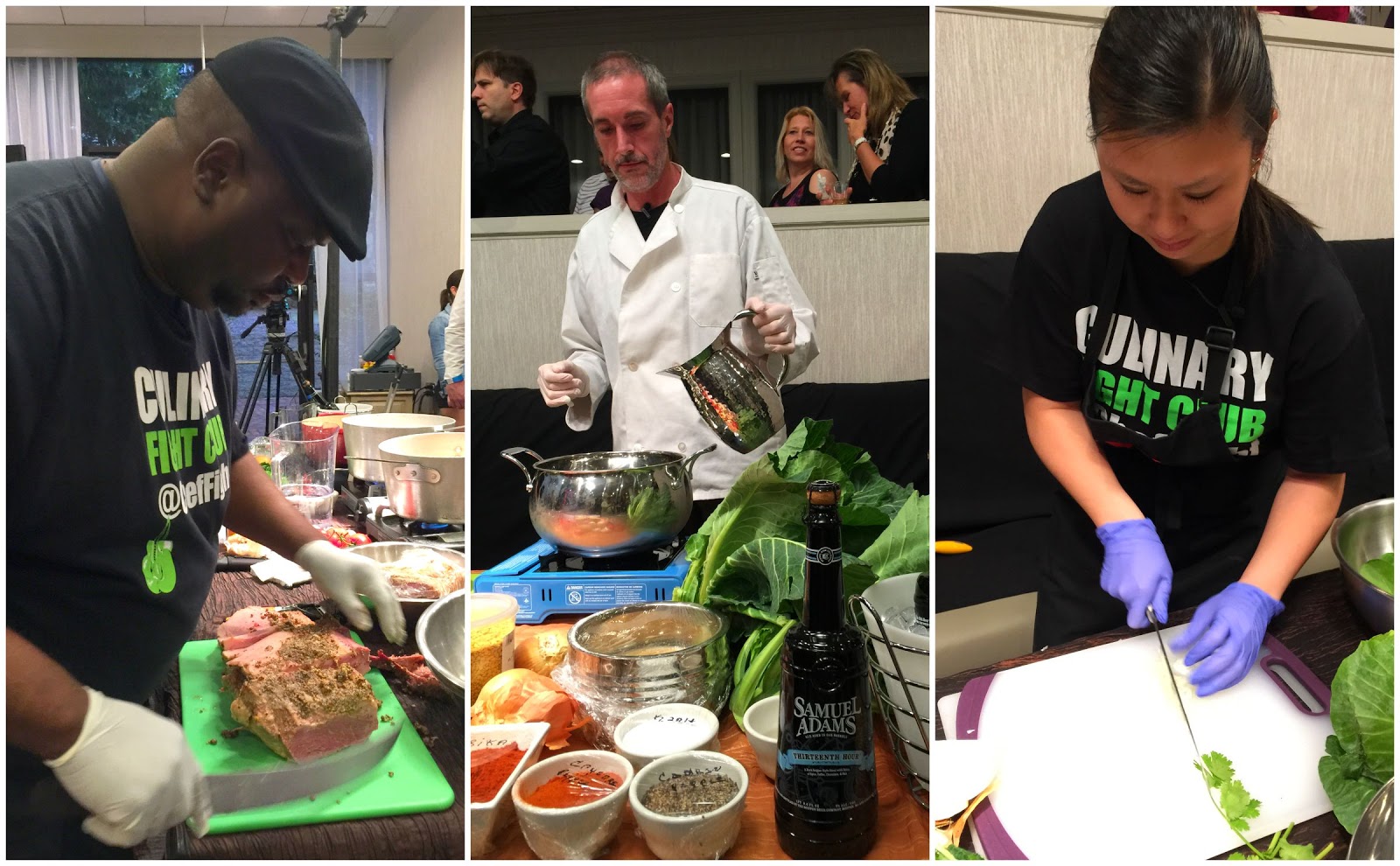 For the first Atlanta challenge, “Fight Green – Go Stout,” each chef was required to create a dish using a “green” and stout, specifically Samuel Adams Thirteenth Hour Stout. Each was allowed to bring three “secret” ingredients from their own kitchens that were checked with the judges at the beginning of the competition. Chef Rich had corned beef, Swiss cheese and tempura batter in his cooler; Sophia brought along dumpling wrappers, dumpling sauce and fresh cilantro; and, Andrew had carrots, collard greens and dried yellow lentils for his dish. In addition to their own ingredients, the chefs were given 60 seconds to select ingredients from the "pantry" of 15 ingredients which included peppers, tomatoes, potatoes, sauerkraut, eggs, cabbage, kale, and broccolini. 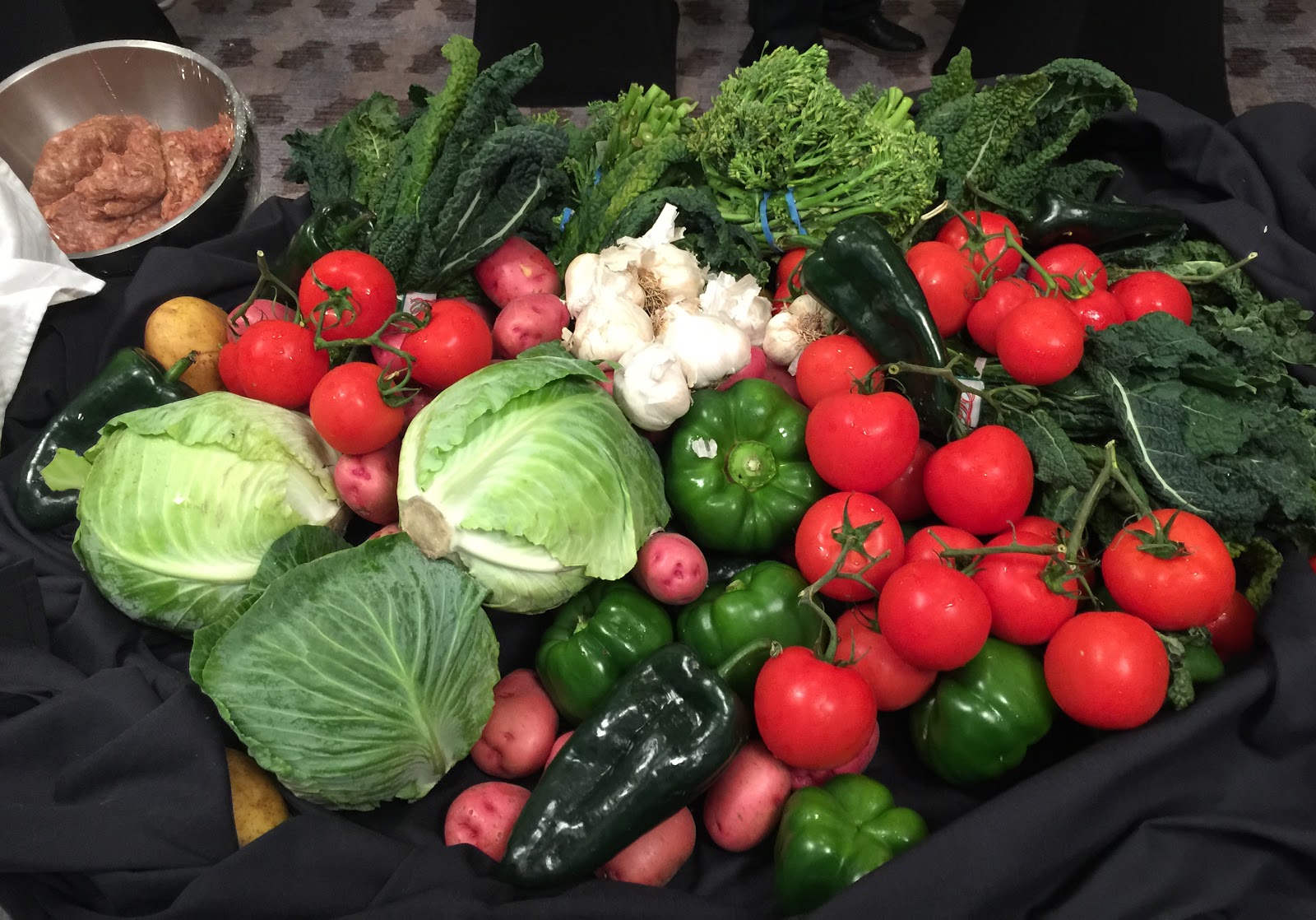 Each contestant was given 60 minutes to prepare their creations with the help of one sous chef and a single 10,000 BTU portable stove. As they got busy chopping and prepping their ingredients, ticketholders enjoyed wine and beer (Sam Adams, of course!), snacks (sliders and ribs) from The Green Leaf restaurant kitchen, and music by Spectrum Events. We were free to wander down onto the floor to watch the cooks at work and ask questions which they answered sporadically since they were a bit preoccupied. Emcee Kari Karch from Kenmore entertained attendees with interviews with the chefs, judges and food bloggers (that’s us!).

As the clocked ticked down the final seconds, each of the contestants put the finishing touches on their plates and prepared to present them to the panel of judges which included Mike McCloud, President of World Food Championships; Beth Peterson of 2013 World Recipe Champ; Wade Fortin, 2013 World Burger Champ; Domenick Buffone of  Mimo’s Bistro; and, Elite Yelper Anthony Martorina who served as “Cheferee” to ensure that contestants followed all the CFC rules.

As a Tastemaker, I had the opportunity to taste each of the final dishes prepared for the judge’s panel and knew they had a tough decision to make. They scored the entries on taste, originality and presentation. Each judge commented on the dishes and some asked questions of the chefs before leaving the room to deliberate. At the same time, I had to select my favorite from Chef Green’s Corned Beef Fritters with Spinach Colcannon, Andrew’s Collards Stuffed with Italian Sausage and Lentils, and, Sophia’s Stout-Braised Dumplings with Cilantro Dumpling Sauce. All the dishes were unique and appealing in their own way. The dumplings were delicate and zesty; the collards were spicy and complex; and, the fritters were crispy on the outside and succulent on the inside with layers of flavor. I made my choice and submitted my ballot for the Tastemaker Award, which is given to the cook whose dish is voted the best by Tastemaker ticket holders, just as the judges re-entered the room.

The crowd fell silent as the winner was announced (pause for dramatic effect)… Chef Richard Green would be headed to Florida in November for the World Food Championship competition! Chef Green was also awarded the Tastemaker Award for his amazing corned beef creation. 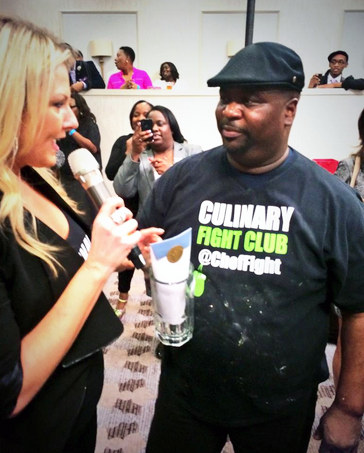 It was very exciting to be a part of such a thrilling and worthwhile event! Watching and participating in a dynamic cooking competition while raising money for Fight2Feed was most definitely an evening well spent. So forget “the first rule of Fight Club,” and talk about this fantastic event and be among the first to buy your tickets when Culinary Fight Club returns to Atlanta in June for the next #TastebudChallenge – BBQ!