As a major sponsor of the High Museum Atlanta Wine Auction* for the past 18 years, Wells Fargo holds an annual Winemaker Dinner with featured wines from elite vineyards. This year’s dinner, “Uncork a Southern Tradition,” featured a specially-designed menu by Executive Chef of The Barn at Blackberry Farm, Joseph Lenn, paired with wines from CIRQ Estate, Kosta Browne Winery and Realm Cellars.

The evening began with a reception at Descante, the luxurious home of Kelly Loeffler and Jeff Sprecher, and the passing of canapés and glasses of Realm, Ibid.Farella, Sauvignon Blanc, 2014. Guests nibbled quail legs with Alabama white barbecue sauce and house-made potato chips topped with caviar and mingled while admiring the owner’s art collection with pieces by Jean-Michel Basquiat and Carlos Nadal.

Tables were beautiful set in a transparent outdoor tent that allowed a fabulous view of the expansive landscaped property. Introductions and opening remarks were made followed by an appearance by the James Beard Award-winning Chef Joseph Lenn (originator of the refined and rugged “Foothills Cuisine®) made to describe his first dish to be presented: Smoked Sunburst Trout and roasted baby beets plated with yogurt and fresh dill sprigs served with Kosta Browne One Sixteen, Chardonnay, 2013. 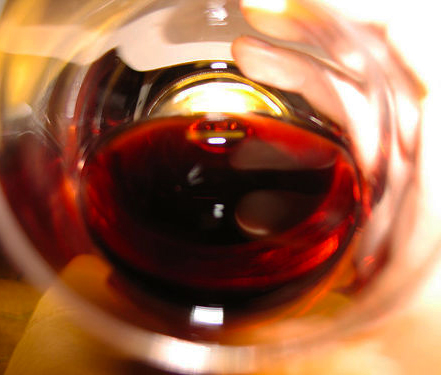 Michael Browne, Founder and Executive Winemaker of Kosta Browne Winery shared the humble beginnings of his winemaking experience, which started with a half-ton of Pinot Noir grapes, a used barrel, and an old hand-crank stemmer-crusher. And while Pinot noir’s are his grand passion, this Montrachet-style chardonnay highlights the fabulous Russian River Valley region with its creamy, toasted citrus nuances. 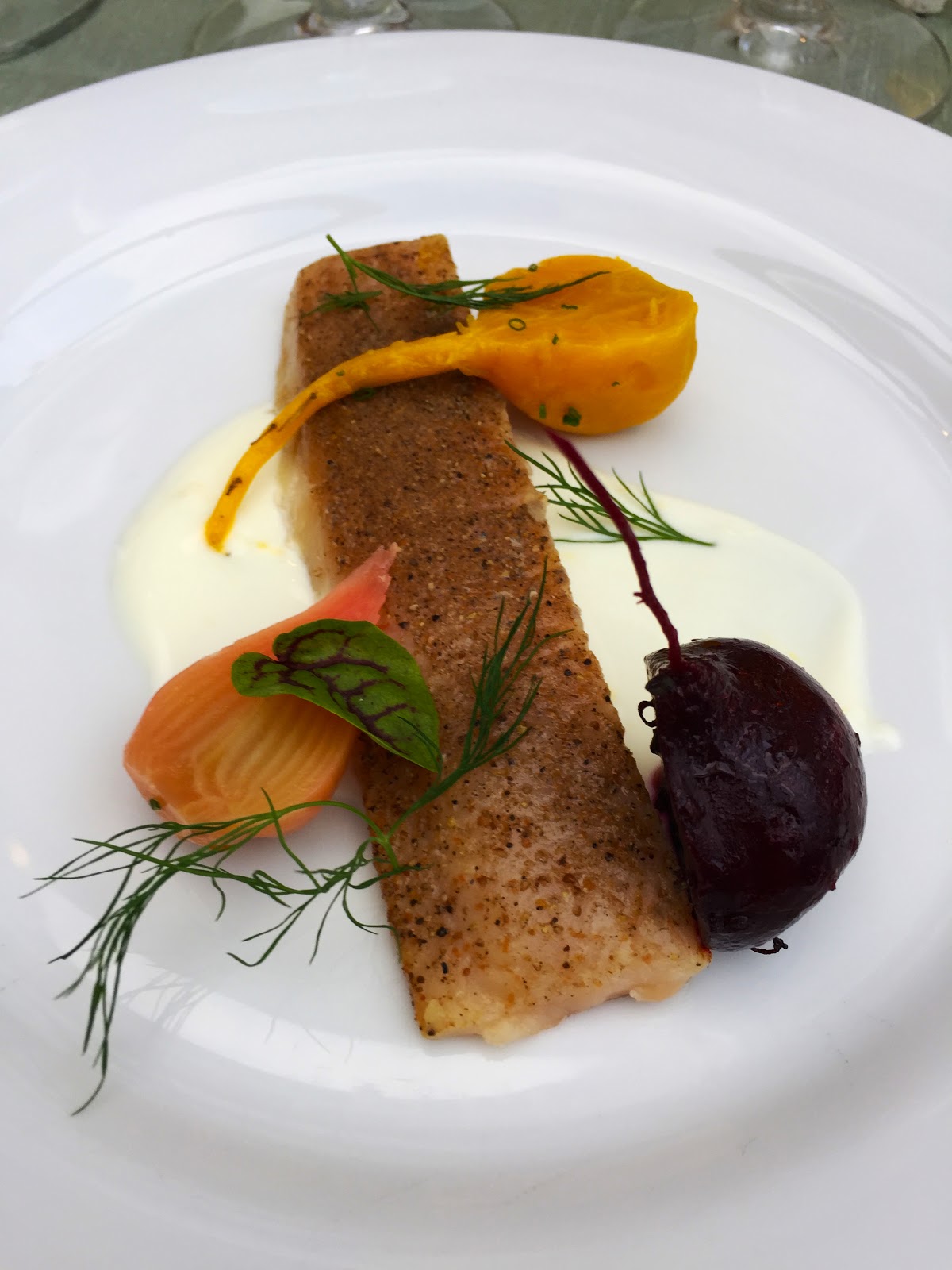 The crowning moment was the arrival of Chef Lenn’s Ribeye Beef Cap served atop crème fraiche with smoked potatoes, wilted greens, goat cheese and leek ash paired with Realm, Farella Vineyard, Cabernet Sauvignon, 2012. As Chef described it, “the beef cap is by far the most tantalizing cut of beef; I love cooking with it.” Of course, he was working with meat from our friends at Brasstown Beef, so it was beyond perfect. And, with the blackberry aromas and elegantly structured tannins of the accompanying Cabernet; sublime. 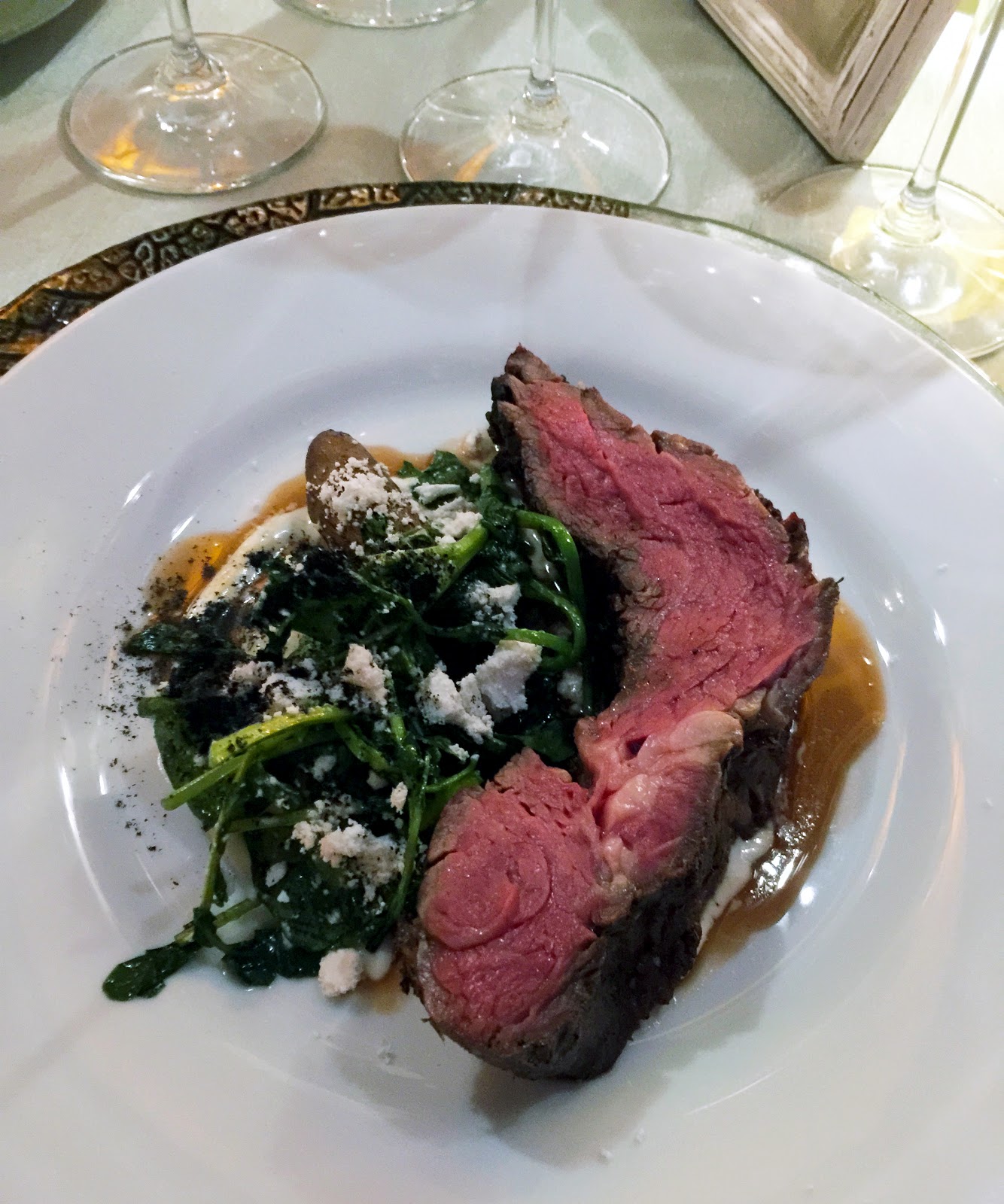 After closing remarks from our gracious hosts and sponsors, the socializing continued as trays of macarons and a decadent milk chocolate hazelnut crunch were offered. A last minute “usie “ with Falcons quarterback Matt Ryan was an unexpected treat and a souvenir to show our football obsessed progeny. We were also generously gifted a bottle of Kosta Browne Pinot Noir Sonoma Coast 2013 to cellar for a special occasion. Special thanks to Wells Fargo for including us in this truly amazing evening of food and wine.