on May 04, 2015
It is bound to happen. We've been growing tomatoes for years and it is inevitable that in the process of staking, pruning and tying them, you knock an unripe green orb to the ground. With as much work that goes into nurturing each baby tomato to maturity, it is maddening to think of wasting even one especially this early in the season. Sure, the typical Southern solution is to slice it and smother the slices in cornmeal and fry them up in lard and top them with pimento cheese, but we were looking for a lighter, healthier variation. 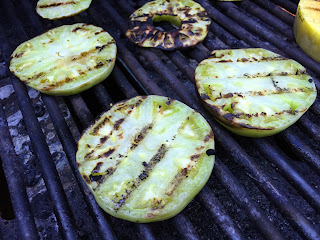 During the summer, we always seem to have a grill fired up and ready to go, so it was a no brainer to toss a few slices on the grill to see what might happen. Grilling always adds a nice smoky, caramelized flavor to vegetables and we were hoping that green tomatoes would be no different. And, man-o-man were we right! The grill softens the under ripe flesh and concentrates the natural sugars.

As for the pimento cheese which is THE ultimate complement to green tomatoes, we took the two main components (red peppers and cheese) and added lighter versions of those as well. 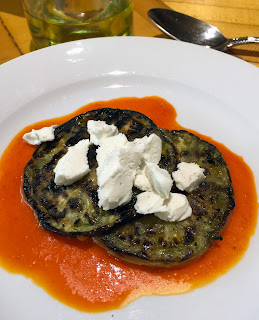 Roast the red peppers directly over the flame of the grill or under the broiler, turning occasionally, until the peppers are blackened all over. Place the peppers in a sturdy plastic bag, seal the bag and let the peppers steam as they cool.

While the peppers are cooling, brush both sides of the tomato slices with olive oil and grill until softened and lightly charred, about 4 minutes per side.

(Cook's note: we used white pepper rather than black so as not to discolor the coulis. Black pepper is perfectly fine to use instead. )