With summer coming to a close, we wanted to take advantage of the timing and the weather to have a little get-together with friends and family. As luck would have it, we also had a 3-liter "bag-in-the box" of Beso Del Sol® Sangria to get the party started! 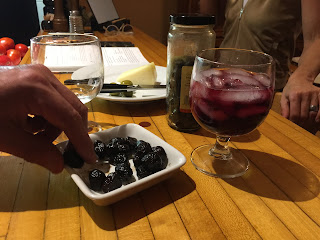 Sangria is served throughout Spain and Portugal during summer at informal social gatherings, like a punch. Beso Del Sol® Sangria, which means “kissed by the sun,” is imported from Spain and made with high quality Spanish Tempranillo which is blended with a selection of fruits and citrus creating a light, fruity mixture that is mildly sweet and very refreshing.

What better way to enjoy sangria than paired with another Spanish tradition: paella. Paella is the Valencian rice dish widely regarded as Spain's national dish and is a major part of a nation's identity and self-image. During the age of European empire-building, nations would develop a national cuisine to distinguish themselves from their rivals.

After gathering all the obligatory ingredients: Valencia rice, saffron, and chorizo; we began putting the dish together. We also busted out the sangria operating under W. C. Fields' philosophy of "I cook with wine, sometimes I even add it to the food." The sangria is well-balanced and not too sweet with 8.5% alcohol (less than the 11% typical of wine) and a smooth finish. 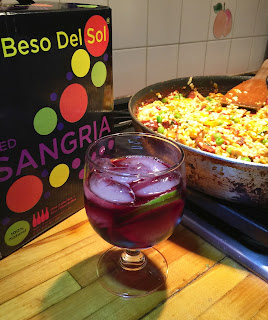 Pre-heat oven to 350°F and begin heating 2 teaspoons of oil in the bottom of the paellera (a 12-inch round deep sauté pan or Dutch oven are a good substitutes. 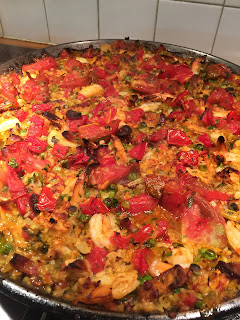 Toss the shrimp, ¼ teaspoon salt, ¼ teaspoon pepper, 1 tablespoon oil, and 1 teaspoon of the garlic in a medium bowl; cover with plastic wrap and refrigerate until needed. Season the chicken thighs with salt and pepper; set aside.

When the oil in the pan is shimmering but not yet smoking, add the chicken pieces in a single layer; cook, without moving the pieces, until browned, about 3 minutes. Turn the pieces and brown on the second side for about 3 minutes more and then transfer the chicken to a medium bowl. Reduce the heat to medium and add the chorizo to the pan stirring frequently. When the sausage is deeply browned and the fat begins to render, 4 to 5 minutes, transfer the chorizo to the bowl with the chicken and set aside.

Add enough oil to the fat in the pan to equal 2 tablespoons and again heat over medium heat until shimmering but not yet smoking. Add the onion and cook, stirring frequently, until softened, about 3 minutes and then stir in the remaining garlic and chopped red pepper and cook until fragrant, about 1 minute. Next stir in the tomatoes and cook until the mixture begins to darken and thicken slightly, about 3 minutes.

Stir in the rice and cook until the grains are well coated with the tomato mixture, 1 to 2 minutes. Stir in the chicken broth, wine, saffron, bay leaf, and 1/2 teaspoon salt. Return the chicken and chorizo to the pot, increase the heat to medium-high, and bring to a boil, uncovered, stirring occasionally. Remove from heat and stir in peas. 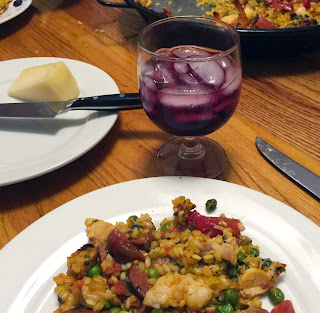 Transfer the pan to the oven; cook until the rice absorbs almost all of the liquid, about 10-15 minutes depending on your oven. Remove the paella from the oven and scatter the shrimp over the rice and return to the oven to cook the shrimp until they are opaque, about 10 minutes more.

To achieve the layer of crusty browned rice that forms on the bottom of the pan known as soccarat that is a traditional characteristic of paella, place the paellera back on the stovetop over medium-high heat for about 5 minutes. When done, let the paella rest for about 5 minutes before serving.

Once cooled, sprinkle the paella liberally with the chopped cilantro and nestle lemon wedges along the edges. Serve with a chilled pitcher of Beso Del Sol® Sangria for an authentic Spanish experience.

While the food items we sampled were complimentary, we received no additional remuneration. The opinions included herein are honest and unsolicited.