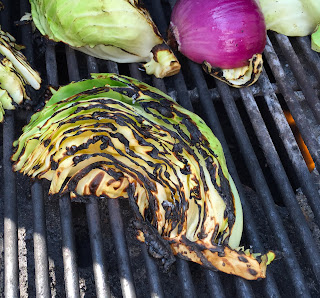 The term cabbage is a derived from the French word, caboche meaning "head." The cabbage family is large and includes kale, collards, kohlrabi, and Brussels sprouts. In years prior to local farmer’s markets and Whole Foods, most of America was relegated to mundane heads of white cabbage, which because it was wildly inexpensive, made it’s way to the dinner table far more frequently than anyone preferred. It was most often finely shredded and drenched in some sort of creamy sauce and served at every cookout ever. During winter months, it was boiled or braised and served with pork chops and ham or as sauerkraut served with sausages.

Had any of us known how outrageously delicious grilled cabbage was, it would have been a dinner time game changer. Grilling cabbage adds a smokiness and char in addition to caramelization that occurs when the natural sugars boil at temperatures above 300 degrees. The flavors run deeper and the sugars get sweeter. The blackened edges or “char” (the burnt bits), add yet another layer of flavor and texture. 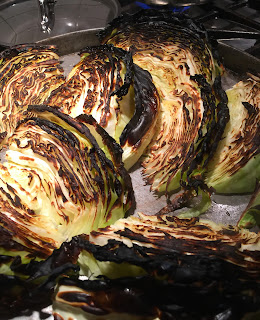 The best way we've found to grill cabbage is to cut it into large wedges, leaving the core intact. This helps to keep all the cabbage leaves together as it grills, and gives you plenty of surface area for charring. The idea is to char the exterior on all sides while cooking the interior so that it is soft but not mushy with a tiny bit of raw crunch at the core. You want the edges get a little blackened, and the cabbage to be warmed through. Because it can be difficult to control, the exact temperature of the grill, it is important to pay attention to the smell and appearance before flipping the wedges over or removing from the grill.

While the cabbage is grilling, mix together the olive oil, lemon juice, Dijon mustard, and salt and pepper whisking until smooth and creamy.

For times when grilling is impossible or impractical, you can char your cabbage under the broiler of your oven. Set the broiler on high heat and place the cabbage wedges in a single layer on a baking sheet lined with parchment or foil. Place the baking sheet under the broiler and cook for about ten minutes or until the edges chars nicely. Remove the sheet from the oven and flip the wedges and broil for another 10 minutes or so to char the second side. Make sure you are running your vent fan, as there will be a strong smell as the outer leaves burn. 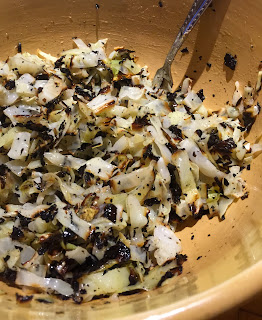 Once cooked and cooled, the wedges can be served whole (like a wedge salad with bleu cheese dressing and bacon bits) or sliced to make a chopped-style salad as we prefer. Even without dressing, it is pretty darn good with a smoky flavor that penetrates deep into its layers, with a great contrast between the nutty sweetness of the charred exterior and the fresh crunch of the center.

Slice the wedges into ½-inch strips and coat with the vinaigrette. Let the salad rest for a few minutes before serving to allow the dressing to saturate the cabbage.  Any leftovers can be refrigerated and served as a cold salad the next day and works well as a sandwich topping.