Those of us that live in the South are accustomed to the tradition of eating collards, black-eyed peas, and pork on New Year’s Day to ensure luck, wealth, and happiness in the coming year. Yet many do not know the symbolism behind each of the prescribed ingredients for prosperity. 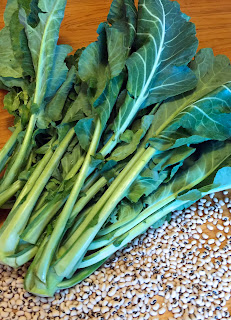 Cooked greens of any sort, including cabbage, collards, kale, and spinach, are eaten on New Year's in different countries because the green leaves look like folded money, and symbolize economic fortune. It's widely believed that the amount of wealth you'll have in the new year is directly proportionate to the amount of greens you eat on New Year's day.

Eating a black-eyed pea for each day of the new year (366 this year because it’s a leap year) is said to bring luck and good fortune. According to Southern folklore, this tradition traces back to the Civil War when many ran out of food while under attack. After the Northern troops commandeered Southern food supplies, all that was left was field peas (and greens and salt pork). The Southern residents felt fortunate that they still had food to eat thus making the peas lucky.

Legumes of all sorts are consumed on New Year’s Day in other parts of the world and are believed to be symbolic of money. Their small, round appearance resembles coins that swell when cooked so they are consumed with financial rewards in mind. For some, the tradition also signifies a year’s worth of good health. Black-eyed peas for example are high in nutritional value, containing calcium, fiber and protein, all for less than 200 calories a cup, depending on how you prepare them.

Now pork has an even stranger association: the custom of eating pork on New Year's Day is based on the idea that pigs symbolize progress because pigs root in the ground, pushing forward. Thanks to the rich fat content found in pork, it also signifies wealth and prosperity. For us, pork symbolizes happiness because who isn’t happy eating bacon?!

In planning for our New Year’s Eve festivities, we want to create a dish with these traditional ingredients in mind. And, of course, it isn’t a party without dip, right? So, starting with the idea of the old reliable warm spinach dip, I headed to the farmer's market to get fresh collards, where in addition to the gorgeous greens, I also found black-eyed peas in the bulk bins. A plan was forming in my head… beans would be a healthy substitute for cheese in our dip. A package of bacon and we were good to go. 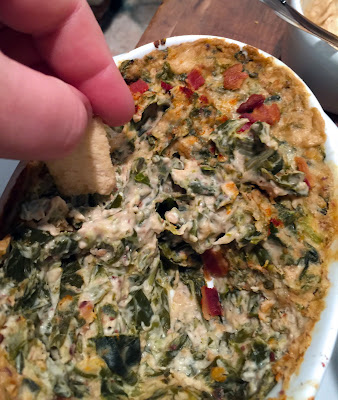 Prepare collards by bringing a large pot of lightly salted water to a boil. Wash the collard greens and remove tough stems. Place the collard leaves in the boiling water and boil for approximately 20 minutes. Drain collards and let cool.

Cook bacon over medium-high heat for 5 to 6 minutes or until crisp. Remove bacon from the pan, drain on paper towels and set aside. Using about 1 tablespoon of the bacon drippings and stirring to loosen particles from the bottom, sauté the onion and garlic until the onion is translucent about 3 to 4 minutes. 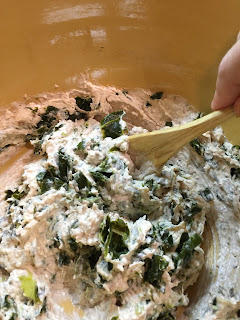 Combine the cream cheese, cooked black-eyed peas (soaked overnight and boiled until tender with salt and pepper) sautéed onions, salt, pepper, and Tabasco (as desired) in the bowl of a food processor, and pulse until fully combined.

Squeeze out the excess liquid from the cooled collards using a kitchen towel and then coarsely chop greens.  In a large mixing bowl fold collards into the black-eyed pea puree until fully incorporated then transfer the dip to a lightly greased 1.5-qt. baking dish or smaller ramekins.

Crumble the reserved bacon pieces and sprinkle the Parmesan cheese and bacon over the top of the dish. Bake in preheated oven until bubbling, about 20 minutes. Garnish as desired. We dusted the top with smoked paprika, but chopped scallions would be a nice addition as well. Serve with toast, assorted crackers, flatbread, crudities, or whatever suits your fancy. And while we know it will be difficult, leave a smidgen behind in the dish to guarantee a stocked pantry in the New Year.

Have you ever wondered if there are foods you should avoid eating on New Year’s Day? Apparently, eating any winged fowl could cause your good luck to fly away. And because chickens have the tendency to scratch backward, eating yard birds could cause you to dwell on the past and/or could lead to serious setbacks in the coming year.