This weekend, the Academy of Motion Picture Arts and Sciences (AMPAS) will honor the best films of 2015 at the 88th Academy Awards ceremony. Since the live broadcast begins during the dinner hour for most of the U.S., many of us celebrate with Oscar-themed dishes and parties. A menu of chicken wings and 7-layer dip hardly seem conducive to watching celebrities dressed to the nines walk down the red carpet. This occasion calls for some “highfalutin” snacks and we have just the thing.

The first Academy Award ceremony which was the brainchild of Louis B. Mayer, head of the powerful MGM (Metro-Goldwyn-Mayer) film studio, was held in May 1929. As a kid, I remember dreading the night the Academy Awards were to air. It was an epic telecast of movie stars I had never heard of, nominated for films I had never seen, wearing clothes made by designers I could never afford. With the advent of cable television, DVDs, DVRs, and the internet, I now look forward to the festivities which now begin midday, and go well into the evening with interviews performances and even live-action selfies posted simultaneously on social media accounts. 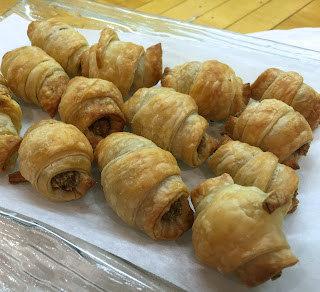 For a fancy afternoon nosh, we suggest these posh little savory pastries. This variation of rugelach is easy to make and even easier to eat!

In a small mixing bowl, combine ground almonds, chopped olives (we used Picholine olives) and anchovy and stir into a paste.

Remove and discard plastic wrap from 1 half of dough, keeping other half wrapped and chilled. Put unwrapped dough in center of 1 sheet of floured parchment paper. Dust dough with flour and cover with another sheet of parchment, then roll out dough into a 9-inch round (about 1/8 inch thick). 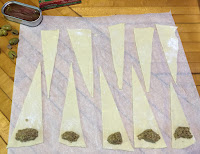 Carefully peel off top sheet of parchment and set aside. (If dough is too sticky to remove parchment cleanly, chill until firm, 10 to 20 minutes.) Repeat procedure with remaining half dough.

On the wide end of each triangle, place a small dollop (about a scant teaspoon) of the almond-olive paste and then roll the rugelach from the base to the point of the triangle. Repeat until all the dough is used. 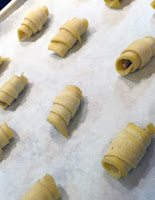 Bake until golden, 20 to 25 minutes. For even browning, rotate the sheet from front to back halfway through baking. Transfer the turnovers to a wire rack, and let them cool slightly. Serve while they’re still warm.

Freezing Instructions: You can freeze unbaked rugelach on a baking sheet until they’re firm, then gently transfer them to a resealable freezer bag. Store them in the freezer for up to 1 month. To bake them from frozen, just add a few minutes to the baking time.