Aphrodisiacs for a Romantic Valentine's Day 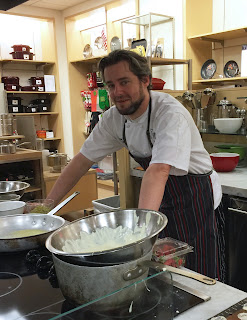 A while back, Chef Nick Leahy of Aix and Tin Tin and Springer Mountain Farms teamed up to host a "Valentine's Day Cooking" demonstration at Bloomingdale's in Lenox Square Mall where Chef Nick taught guests to recreate a romantic Valentine's Day dinner at home. He prepared two aphrodisiac-infused recipes in the Bloomingdale’s Home kitchen.

The chef began the demonstration by explaining the concept behind aphrodisiacs and the varying types. Aphrodisiacs (named for the Greek goddess of love, Aphrodite) are items that inspire lust, improve potency or enhance sexual function and most commonly refer to food. There are three categories of aphrodisiacs (with some overlap):

Visual Enticements – Ingredients that resemble sexual organs. These include phallic symbols such as bananas, cucumbers, carrots as well as oysters, papayas and figs.

Expectation-Setters – Items that set a tone to suggest that a romantic evening is inevitable. These items might be expensive, decadent, rich or meaningful to the couple in some way including champagne, caviar, or chocolate.

Physiological Stimulants – these ingredients are that cause a physical reaction as such warming the blood, lowering inhibitions, or increasing energy levels which include chili peppers, red wine, honey, watermelon and chocolate. 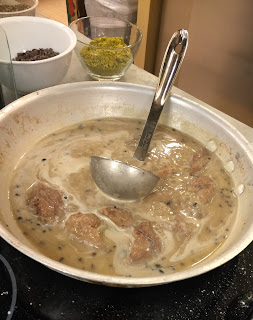 Heat the pan over medium-high heat and add oil.

Combine flour, salt and pepper in a mixing bowl. Drain the chicken livers and dredge each in the flour mixture. 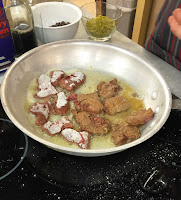 Once the oil in the pan has reached the smoking point, sear livers for 2 minutes on each side. Remember to place the livers in the pan with a motion going away from you to avoid splatter burns. Once livers are cooked set aside on a plate.

Remove the pan from the flame and add brandy. Deglaze the pan with the brandy, scraping all the flavorful brown bits from the pan. Add the stock and stir to combine, then add the heavy cream. Bring the pan sauce to a boil and reduce heat. Allow to simmer and thicken for 2 minutes.


Add the cacao nibs and gradually swirl in knobs of butter, piece by piece. The cream sauce with begin to emulsify and look silken. Season the sauce to taste with salt and pepper. Return livers to the pan to coat evenly before serving and garnishing with a sprinkling of chopped pistachios. 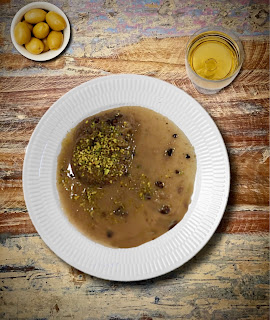 Chef Nick recommends serving the livers over polenta, or with a little side salad of bitter lettuces like frisee or chicory, with a light dressing.