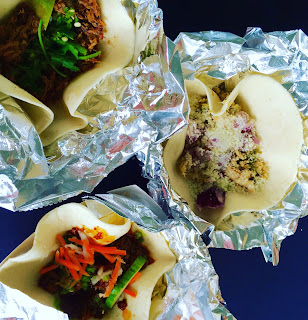 Did somebody say taco? Atlanta is famous for its festivals. On any given weekend you can find an arts, music or food festival, but when the first-ever Atlanta Taco Fest was added to the calendar, the masses went, well, loco. The highly anticipated event was advertised as "the largest taco competition and taco celebration on the East Coast," and ticket sales sky-rocketed.

Unfortunately, the organizers were not prepared for the immediate success of the festival which resulted in oversold tickets, long lines, and food shortages. As should be predicted in any first-time festival, there were also some technological malfunctions and moments of disorganization, and the intermittent rain added to the issues.

Despite these blips, I enjoyed the the festival enormously. As a VIP ticket holder, I had access to the exclusive tent sponsored by Lunazul Tequila which featured blind tequila tastings, a design-your-own drink bar, picture magnets and even a complimentary caricature artist. VIP ticket holders also received a Lunazul swag bag with a (dry) logo T-shirt, ball cap, shot glasses, and a key ring. In fact, many forwent the long taco lines and remained in the tent for the duration of the afternoon. 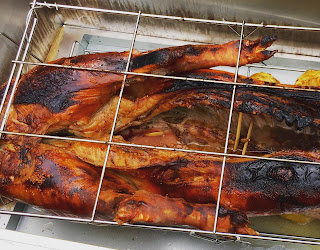 With the long lines, it was necessary to have a strategy for your taco procurement. Being a huge fan of both Bartaco and Smoke Ring, I checked the lines for both and chose the shortest. The Bartaco guys gave me a behind the scenes view of the “whole-a** pig” smoking in the background and trays of saucy pulled pork ready to be ladled onto fresh corn tortillas, and that guacamole… ¡Muy Bueno!

In need of a non-alcoholic beverage, I heard that the folks from Superica were serving an amazing aqua fresca and while the line for their tacos stretched to Terre Haute, procuring one of their drinks made with cactus juice was much less challenging. 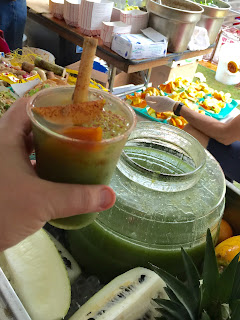 I immediately jumped in line for Jordan Wakefield’s signature “Burnt Ends” taco. I will confess it took no less than 25 minutes of waiting, but I indulged in not just one, but three of the Smoke Ring taco offerings: Burnt Ends, BBQ chicken and Smoked Pork.

I took my tacos back to the VIP tent, which had available tables and chairs so that I could sit and enjoy my food rather than scoffing it down while standing. As I was finishing my last bite, the sky began to darken and thunder could be heard in the distance – it was time to go.

Glitches notwithstanding, I will be marking my calendar for the second annual Taco Festival in hopes there will be one.

While we received complimentary tickets to the event; writing and photos included herein are original and the opinions are honest and unsolicited.