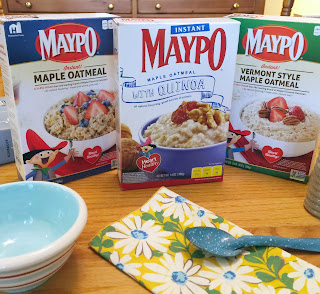 Few kids these days have ever heard of Maypo. I vaguely remember it myself, but ask your parents or grandparents if they’ve heard of it and they will automatically say, “I want my Maypo!” Maypo, developed in 1953 by the Maltex Corporation in Burlington, Vermont was one of the original flavored oatmeals. They gained their popularity with a highly successful television campaign with an adorable 4-year-old named Marky Maypo who would exclaim "I WANT MY MAYPO!" Over the years, other warm breakfast cereals gained market share while the Maypo brand bounced from company to company. Today, Homestat Farm is working to reacquaint customers with Maypo by introducing it to a new generation of children.

We recently received three varieties of Maypo to sample: Instant Maple Flavored Oatmeal, Vermont Style Maple Oatmeal, and Instant Maple Oatmeal with Quinoa. The first question in deciding which to try first was “What is the difference between Maypo Maple Oatmeal and Maypo Vermont Style?” The oats used to manufacture Instant Maple-flavored Maypo are thin rolled oat flakes. The texture and eating qualities of Instant Maypo are similar to other brands of oatmeal products. However, the oats used for Vermont-Style Maypo are finely cracked oats or oat bits making the texture smoother and creamier. Both cereals have the same flavor profile have 2/3 less sugar than the leading brand of maple-flavored oatmeal. 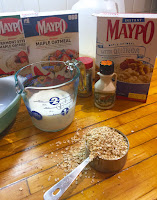 The new Maypo Instant Maple Oatmeal with Quinoa combines maple-flavored, whole grain oatmeal with protein-rich, golden quinoa flakes. The ancient grain quinoa is a complete protein source, and a valuable source of certain healthy fats and is also rich in antioxidants. This combination sounded most interesting so we decided to start there.

In addition to a multitude of health benefits, the Instant Maple Oatmeal with Quinoa is incredibly easy to prepare either in the microwave (or one a stove top.) Place one cup of water or milk in a microwavable bowl with ½ cup Maypo and a pinch of salt and cook on high for 1½ to 2 minutes. That’s it! The result was a hot breakfast in minutes. While not a huge fan of instant oatmeal because it tends to be a bit slippery, the consistency of the oatmeal with quinoa was excellent. 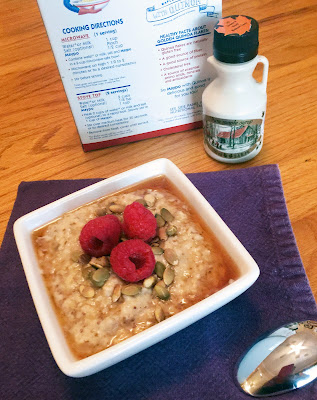 Because I like my oatmeal a bit sweeter, I added a drizzle of another original Vermont product, pure Dark Robust Maple Syrup from Thunder Bay Maple Supply. The delicious, all-natural syrup contains higher levels of beneficial nutrients, antioxidants and phytochemicals than white table sugar or high fructose corn syrup. I also tossed some pepitas and berries on top for the perfect post-workout snack.

With cooler Autumnal weather on the way, I am looking forward to trying with the other Maypo flavors and styles as well experimenting with recipes using Maypo products such as Easy Apple Crisp, Maypo Oatmeal Cake or Marky's Maypo Cookies available on the Homestat Farm website.


Disclosure: While we received a complimentary samples of Maypo products and Thunder Bay maple syrup for review purposes, the opinions included herein are honest and unsolicited.