Marc Forgione’s story is one that is near and dear to our hearts. We began this blogging project when our sons expressed an interest in learning how to cook the recipes handed down from our families, namely Fanny’s meatballs and sauce. Marc learned to cook at an early age from one of the best chefs (in fact, THE best chef according to the James Beard Foundation in 1993), from his Dad, Larry Forgione, a.k.a “The Godfather of American Cuisine.” 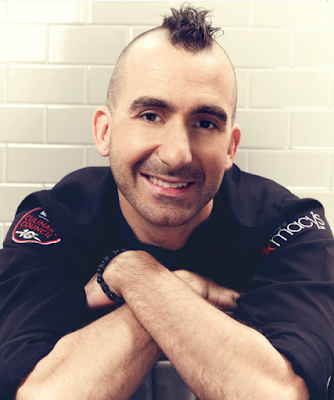 After graduating with a degree in restaurant management, Chef Marc headed to France to diversify his experience. He returned to New York City to work at BLT Prime. Next, Chef Marc, winner of Food Network’s Next Iron Chef, Season 3, opened his own restaurant. Restaurant Marc Forgione has received three Michelin stars in the Michelin Guide New York City along with many other awards including “Top 25 Restaurants in NYC" by Modern Luxury magazine.

In 2012, Chef Marc opened a steakhouse in Atlantic City which he named “American Cut” as a nod to his father and his restaurant, "An American Place." Now known for his own innovative take on American cuisine, his menu includes unique and original dishes like his take on the quintessential surf and turf with his signature Chili Lobster served alongside a huge, aged Tomahawk Rib Eye Chop. Again following in his Dad’s footsteps, Chef Marc published a cookbook, “Marc Forgione: Recipes and Stories from the Acclaimed Chef and Restaurant” in 2014 which includes 170 recipes along with gorgeous photography.

So you can imagine, my excitement when I heard that Chef Marc would be coming to Atlanta to share a few of his favorite award-winning dishes as a member of Macy’s Culinary Council on October 20th at Macy’s in Lenox Mall at 6:30pm. Even more exciting is that this event is FREE!

In fact, if you register in advance at chefmarcforgionemacys.eventbrite.com, you will receive a $10 Macy’s gift card. And, if you spend $35 or more in Macy’s Home Department, you will receive a special gift and a copy of Chef Marc’s cookbook, which he will be signing after the cooking demonstration. For our readers who do not live in the Atlanta area, you can learn more about Macy’s Culinary Council and upcoming events at http://bit.ly/MarcFall16.