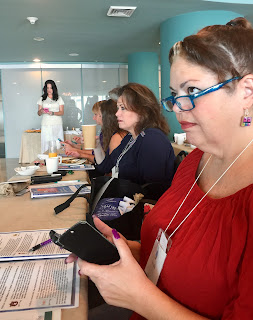 After an early morning photo session and delicious breakfast sponsored by the happy egg co., we were welcomed to the 3rd annual World Food Blogger Summit by members of Gulf Shores/Orange Beach Tourism Bureau and World Food Championship staff. We were presented with amazing gift bags filled with numerous goodies from WFC sponsors and indulged in hand-picked, hand-washed, hand-roasted coffee from Chef Bryan-David Scott of A Cup of Luxury. This amazing coffee retails for $1200 per pound as was a rare treat to be sure.

Dr. Bill Walton (known as "Dr. Oyster") of the Auburn University Shellfish Lab shared his knowledge about the oyster farming revolution happening across the Southern Coast and throughout the Gulf of Mexico. He showed us how the Alabama Oyster Farming Community is currently adapting new techniques to grow and nurture consistently high quality, world class oysters. 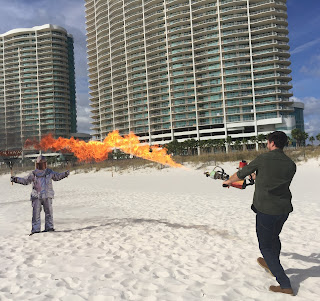 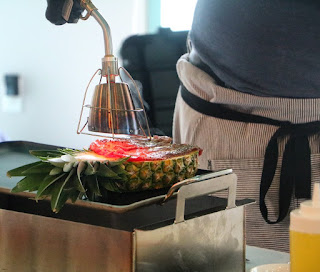 We were then invited to the beach to participate in the official launch of Hormel’s new “BroTorch Cooking” campaign. Chris and Ethan, two Bros aiming to show the world how to BroTorch enough chili dogs, nachos and potato skins to satisfy your next tailgate party. Summit bloggers were given the opportunity to roast hotdogs using a BroTorch shooting 25 feet of flames. Back in the conference room, renowned Chef, Eric Harland, demonstrated how to cook a surf and turf chili recipe using a torch, a pineapple and Hormel Chili.

Our lunchtime keynote speaker was the man behind the World Food Championships, Mike McCloud who explained the food sport phenomenon in terms of numbers: 1,421 contestants and 430 teams from 48 states and 14 countries. In addition, the WFC has 82 brand sponsors and 794 million media impressions over the last year. The most notable takeaway from the speech, however, is McCloud’s passion for his brain-child and his commitment to the WFC community.

Next up was Ted Wampler, Jr., President and COO of Wampler’s Farm Sausage Company to describe how he has completed 3 solar installations used to power his family’s sausage company. Wampler has also installed the first commercial Proton Power CHyP (Cellulose Hydrogen Power) System in the world.  This revolutionary technology powers his company with cheap hydrogen on demand, and provides byproducts of pure water and biochar which is an amazing soil enhancer that can hold carbon, boost food security, and increase soil biodiversity, and discourage deforestation. Wampler’s is proving how innovative food companies are producing energy for a future power grid. 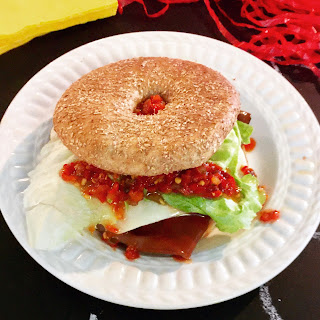 With the help of food sponsor, Wickles Pickles and the UK’s best food photographer, Michael Sewell, we learned new tips for food photography including improved lighting techniques, changing angles, using varied color backgrounds, and arranging food and props to make it more presentable for blog and social media posts. Then, we put our new knowledge to use as we created our favorite tailgate sandwiches (using the unique sauces of another food sponsor, Saucy Mama), arranged and styled them, and photographed them under the watchful eye of Mike Sewell. Our photos will be sent to Wickles Pickles and Saucy Mama for use across their social platforms.

And, if that wasn't a day full of innovation, expertise and deliciousness, Chef Roc and Chef Sal, representing the great State of Hawaii and their new Goomba Imports, brought a selection of new products for us to sample as we mingled and reflected on the events of the day. After tasting Moretti’s Pasta with VJ's Butcher Block Italian Venison Sausage and Central Formaggi’s Pecorino tapenade, Beck's Final Touch Seasoning Blend, and Wilson Creek flavored champagnes, we headed back to our incredible accommodations at Turquoise Place with samples of Gosling’s Dark & Stormy Rum Cake, and Penotti Cookie Butter to rest up for Day 2!