Up at the crack of dawn and loaded on a bus headed to Bayou la Batre for the full back lot tour of Alabama Seafood. For those movie fans out there, Forrest Gump headed to Bayou La Batre to fulfill the dream of his fellow soldier, “Bubba” Blue, who yearned to return home to become a shrimper. 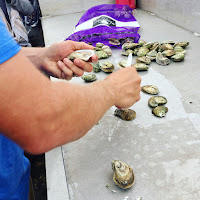 After a quick stop to pick up a few more passengers and a few boxes donut holes from Sugar Rush Donuts to satisfy our sweet teeth, we headed to Murder Point Oysters to see an oyster farm in action. Oysters, are a significant part of the economy of the region. Murder Point is home to a Zirlott family that raises oysters from spawning, nurturing the beds, and fostering the oysters until they are ready to be delivered to market. Murder Point oysters are known for their clean, buttery flavor and after tasting a freshly shucked oyster, it is easy to see why! 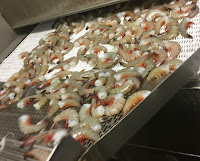 A short bus trip and we landed at the Graham Shrimp Company, Inc. where Ernie Anderson met our group and led us on a tour of this distributor of headless and head-on shrimp. The company that has direct access to production directly across our dock. The tour of the facility led us through the sorting room where large conveyors sort the shrimp by count (the number of shrimp per pound) prior to being flash frozen and packaged for distribution. 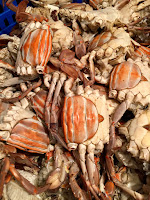 Another quick bus trip, took us to Olympic Shellfish, a family-owned supplier of crabs with more than two decades of experience. John Grevenitis walked us through the processing facility where crabs are brought in fresh to the facility each evening to be rinsed, culled, cleaned, and sorted by hand into lump, jumbo lump and claw meat before being distributed across the United States for 52 weeks a year!

Since our appetites had been wetted by all the seafood we had seen that morning, the Organized Seafood Association of Alabama hosted an old-fashioned Bayou Boil featuring Graham Shrimp Co. shrimp, crab claws from Olympic Shellfish, Murder Point oysters, as well as other members of the Eat Alabama Wild Seafood marketing initiative which was founded in 2002 to promote locally caught and processed shrimp and seafood. 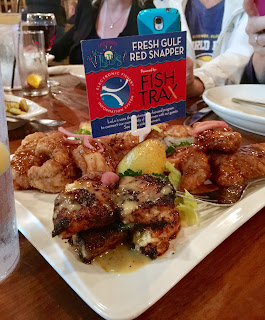 Fully satiated, we embarked on a quiet trip back toward Orange Beach. We stopped at the Homeport Marina to visit LuLu’s Homeport, owned by Lucy Buffett (sister of singer/songwriter Jimmy Buffett). LuLu’s is a proud promoter of the FishTrax Marketplace which allows customers to identify not only the area where the fish was caught but the boat and captain that caught it. Brian Ahlers, a graduate student in Marine Resource Management at Oregon State University, was on hand to explain how the Fish Trax program works and its future impact. Executive Chef Dylan Feenker gave an overview of the program’s impact on his kitchen at Lulu’s and David Krebs, Commercial Fisherman (and Founder of Ariel Seafood!) shared his perspective from the standpoint of a ship’s captain. We then got a firsthand look at how FishTrax works as we sampled Lulu’s blackened, fried and grilled snapper which came with a searchable QR code so that we could see exactly when and where our fish was caught.

After our meal, we were invited to tour the Alleluia, a 58-foot Gulfstream and one of the first boats in the Gulf that allows fishermen to weigh fish when caught and immediately ice them in 800-pound bins that lift directly from boat to dock to eliminate handling. The Alleluia, part of the Ariel Seafood Fleet, voluntarily uses cameras to document the sustainability of the fishing methods. A typical trip for the Alleluia is four days with a catch of 8,000 pounds of fish.

After our LuLu’s experience, we headed back to the penthouse of Turquoise Place to chat about the events of the day, watch the election results, and enjoy election-themed cocktails even more food from Hormel! 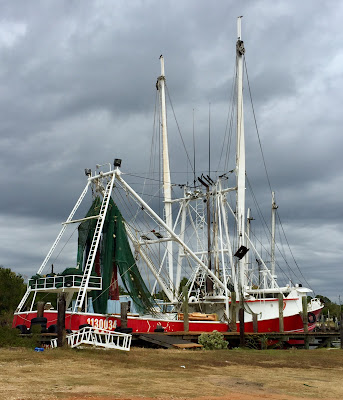