Last week, I had the chance to visit the new Brazilian churrascaria, Fogo de Chão, a snazzy, modern restaurant serving traditional gaucho cuisine in Dunwoody. The founders of Fogo de Chão grew up in the Serra Gaucha on a traditional Southern Brazilian farm where they learned the art of churrasco grilling. The founding brothers developed the Fogo concept while undertaking proper churrasqueiro training. Their first restaurant built in the countryside of Porto Alegre became so popular with American tourists, the brothers opened a restaurant in Dallas. Here are a few more things, diners should know about eating in a churrascaria: 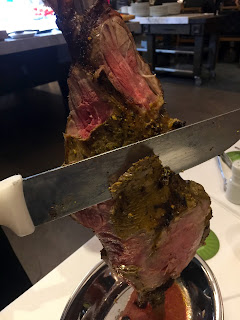 1. For those uninitiated, a churrascaria is a restaurant that serves grilled meat, most offering as much as one can eat. The waiters move around the restaurant with the skewers, slicing meat onto the client's plate. It is a meat fest, plain and simple.

2. You might be pronouncing the name of the restaurant incorrectly. Fogo de Chão is actually pronounced "fo-go dee shown," rather than "fo-go dee chow.” Impress your friends by saying it correctly.

3. The Fogo Bar makes each of their caipirinha cocktails individually. Made with sugar and lime and cachaça, Brazil's most common distilled alcoholic beverage, the caipirinha is Brazil's national cocktail.

4. The name, Fogo de Chão, means "fire in the earth" which refers to the traditional gaucho style of cooking in which large cuts of meat are roasted in a pit in the ground.

5. Most of the chefs are actually from Brazil. These chefs are superstars. They butcher their own meat they cook with live fire and then serve it on large skewers tableside. All these responsibilities may explain why chefs undergo a year of training. The most popular cuts are served by the most experienced chefs, keeping chefs interested in continuing to learn the art of churrasco grilling. 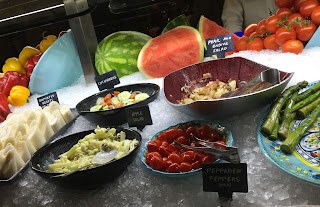 6. The fancy pants worn by Fogo's chefs aren't just a work uniform. Those jaunty bombachas de campo are the distinctive style of pants wore by gauchos (South American cowboys) which may be the most comfortable trousers ever made.

7. Green for Go – Red to Stop. Dining the Fogo way is an experience in itself:  guests use a card that is red on one side and green on the other: green means bring on the meat sweats, while red means you need a break in the meat action. This serving style is called espeto corrido or rodízio, and is customary in Brazil. Servers are always available to provide drinks, dessert and anything else a guest’s hungry heart desires. 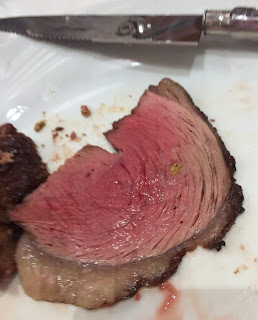 8. Hot to trot - Literally. Chefs have a narrow window of time to deliver the highest-quality meat experience to guests. After a few minutes, the meat is considered cold and returned to the kitchen to be repurposed in soups or other dishes.

9. You will not leave hungry. Guests choose from over 18 varieties of meat that is cooked over live fire and served on skewers. In addition, there is a glorious salad bar as well as a feijoada bar, which serves the traditional black bean stew from Brazil.

10. Picanha is the most popular cut of meat, not the filet. A little known cut in the U.S., picanha is the prime part of the top sirloin referred to as the rump cap or coulotte. Filet mignon follows close behind in popularity. There's also a varied selection of chicken, lamb, pork and bacon-wrapped goods for those who are really yearning for those meat sweats.

11. This is a modern, refined version of 1979 gaucho cooking in Brazil, and is the same experience that you would have at the original São Paulo location. At Fogo de Chao, it's about preserving a culture and its traditions, not about gimmicks.