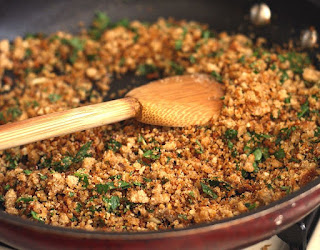 Okay, so I am not really prepared to write 10-line stanzas of iambic verse using an ababcdecde rhyming scheme, but the virtues of bread crumbs toasted in extra-virgin olive oil are many and varied.

Originally used as an inexpensive substitute for cheese, "Mollica di pane," as it is called in Italy, is a traditional garnish that can elevate even the simplest dishes. Served on creamy pasta dishes, sautéed vegetables, or broiled fish, mollica (also known as pangrattato) lends a delightful texture and flavor nuance. In Sicily, anchovy oil is often used in place of olive oil because it is readily available. Mixed with less savory flavors like lemon zest or mint, these delightful crumbs can even be used as a topping for gelato.

Heat olive oil over medium heat and when the oil is hot; add the bread crumbs, tossing gently until they are evenly coated.  Sauté the crumbs until they are golden brown. This will probably take longer than you expect. Allow the crumbs to cool, as they cool they become even crunchier. Note that super fine bread crumbs (most often purchased in a can from the grocery store) will not work with this technique as they will turn into a paste or dough rather than a crunchy delicacy. We place the mollica in a bowl on the table for diners to sprinkle to their heart's desire. For the record, the bowl is always empty by meal’s end!