Technique of the Week: Pickling

Pickling is the process of preserving food by marinating and storing it in an acid solution, usually vinegar (acetic acid) or “anaerobic fermentation” in brine which produces lactic acid. Pickling results in preserved foods with salty or sour flavors.

Pickling began more than 4,000 years ago as a way to preserve food for out-of-season use and for long journeys, especially by sea. Salt pork and salt beef were common staples for sailors before the days of steam engines. Although the process was developed to preserve foods, pickles are also made and eaten because people enjoy the resulting flavors. Pickling may also improve the nutritional value of food by introducing B vitamins produced by bacteria.

Pickling can preserve perishable foods for weeks or months and is a terrific way to ensure that an overabundance of summer produce does not go to waste. In addition to salt or vinegar, antimicrobial herbs and spices, such as mustard seed, garlic, cinnamon or cloves, are often added. If the food contains sufficient moisture, a pickling brine may be produced simply by adding dry salt (similar to maceration). For example, sauerkraut and Korean kimchi are produced by salting the vegetables to draw out excess water.

The term pickle is derived from the Dutch word pekel, meaning brine. In the U.S., the word pickle almost always refers to a pickled cucumber. Other types of pickles are described by name as in the case of as "pickled okra," or "pickled eggs." Interestingly, in the U.K., the term pickle refers to Ploughman's pickle which is a kind of chutney. 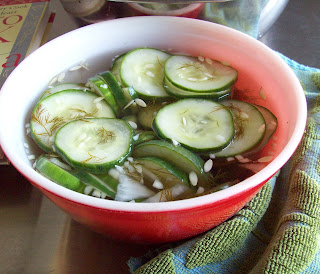 In a nonreactive bowl, combine cucumbers, onions, dill, and peppercorns. Pour vinegar mixture over vegetables and toss to combine. Cover the bowl and refrigerate for at least 8 hours before serving. Store pickles in a jar or other covered container in the refrigerator for up to 5 days.

(If you need to speed up the maceration process, you can bring the vinegar mixture to a boil before adding olive oil and pour over cucumbers. Once cooled the pickles are ready to eat.)