As with most things in life, even smoke, in moderation, has its advantages. The fire fighters of Atlanta’s Station House #29 agree! A brief poll of these everyday heroes revealed that while they most often eat spaghetti at the station house, their favorite thing to do is “fire” up the grill and cook some flavorful red meat. Whether it is steak, burgers or barbeque, nothing beats taste of red meat cooked over a smoky fire.

It comes as no surprise that people tend to take their barbeque very seriously! In the Southeast, barbeque usually refers to pulled pork with a spicy vinegar-based sauce, but in Texas and Kansas City barbeque refers to smoked brisket cooked long and slow served with a sweet and spicy tomato-based sauce.

Over the Labor Day weekend, Dom decided to try his hand at grilling brisket. Barbecuing a whole brisket of roughly 10 pounds for almost six hours sounded very intimidating, but even though the process was time consuming, it was actually pretty easy. 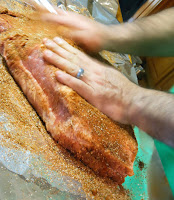 Apply dry rub liberally to all sides of brisket and wrap tightly in plastic wrap. Refrigerate for at least 2 and up to 48 hours.

One hour prior to cooking, remove brisket from refrigerator and unwrap. Ignite about 2 quarts of hardwood charcoal or charcoal briquettes in pile on one side of grill and burn until completely covered with thin coating of light ash.

Meanwhile, assemble a pouch of wood chips by wrapping about 3 cups wood chips (preferably mesquite) in double sheet of heavy-duty aluminum foil and poke 6-8 holes in the top of the pouch with a knife or fork to allow the smoke to escape. Place the pouch on top of the hot coals. 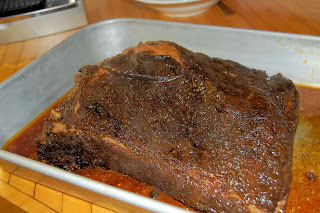 Set grill rack in place over the coals and position brisket, fat side up, on the side of the rack opposite he hot coals. Make sure that grill vents (top and bottom) are open. For optimal smoking, position the brisket directly under the top vent of the grill cover. Allow the brisket to smoke without removing the cover for about 2 hours so that the smoke flavor permeates the meat.

Once the brisket is well smoked, it will need to continue to cook at approximately 300 degrees for another 3 or so hours to allow the collagen in the meat to gelatinize. If you can regulate the temperature of your grill, you can continue to use it for this second phase of cooking, If not, adjust the oven rack to the middle position preheat your oven to 300 degrees.

Seal the brisket completely in heavy duty aluminum foil and place it on a baking sheet. Sealing the brisket in foil creates a moist environment which allowing the meat to cook at a higher temperature without drying out. Bake for about 3 to 3 ½ hours until the meat is fork-tender or an instant-read thermometer inserted into thickest portion of meat registers 210 degrees.

Remove the brisket from oven and loosen foil at one end to release steam. Let the meat rest for 30 minutes. Drain the juices from the foil into a large bowl. Skim the fat from the juices and mix with an equal amount of barbecue sauce. 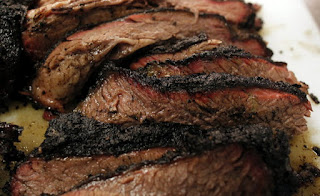 Unwrap the brisket and place the meat on a cutting board. A full brisket has two “cuts” or sections: the flat end and the point cut. The grain of the meat runs in opposite directions, so these two sections should be separated before slicing. Cut the brisket into thin slices by carving across the grain on a diagonal.

Moistening the sliced brisket with the meat juices adds flavor and moisture. Drench slices with some of the barbecue sauce mixture and transfer to a serving plate or layer on a slice of white bread with slaw and pickles and fold into a neat triangle, Kansas City-style.