Although November isn’t officially “National Pie Month,” it should be. Many Americans look forward to eating the pie rather than turkey or green bean casserole. Whether it is sweet or savory, just about every combination of meats, vegetables, fish, and fruit imaginable has been baked between two layers of pastry. Of course, no traditional Thanksgiving meal is considered to be complete without the customary pumpkin pie and if you live in the South, pecan pie is also an essential addition to the Thanksgiving table. 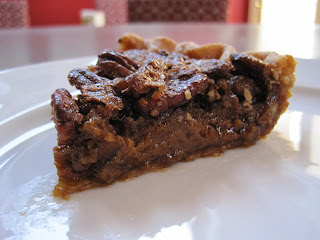 Pecans were an important part of the diet of Native Americans before the arrival of the European settlers. Cultivation of the pecan tree was very successful, so much so that the pecan tree is the official state tree of Texas and has official status in New Mexico, Louisiana, Mississippi, Georgia, and Florida as well. Even though pecans have a fairly high-fat content, they are composed of 87% unsaturated fatty acids and may actually help to lower blood cholesterol levels. Pecans are also a good source of potassium, thiamine, zinc, copper, magnesium, phosphorous, niacin, folic acid, iron, and vitamin B6, and are a good source of fiber.

Originally historians believed that the French created pecan pie soon after settling in New Orleans, after being introduced to the nut by Native Americans. However, attempts to trace the origin of this dessert have not found any recipes earlier than 1886 when it first appeared in Harper’s Bazaar magazine. Better-known cookbooks such as Fannie Farmer and The Joy of Cooking did not include versions prior to 1940. Since the process for refining corn sugar was not developed until the 1880s, early settlers of New Orleans most likely used cane syrup, which was a widely used sweetener of the time. There is no doubt that the producers of Karo corn syrup popularized the dish, and many recipes specify Karo syrup by name as an ingredient. 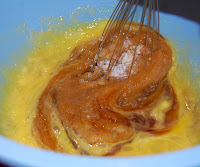 This recipe for chocolate pecan pie was shared by our friend Amanda and is as easy as it is delicious. Pecan pie lends itself to many variations and flavoring options including maple, bourbon or even bacon. Experiment to find your favorite!

Preheat oven to 350 degrees F. Slightly beat eggs and add corn syrup, sugar, butter and vanilla. (Amanda’s tip: spray your measuring cup with cooking spray before measuring, this will allow the corn syrup to drain from the cup without sticking.) Stir the mixture until well blended. Fold in pecans and chocolate chips are stir to thoroughly coat with syrup without breaking up pecans too much. 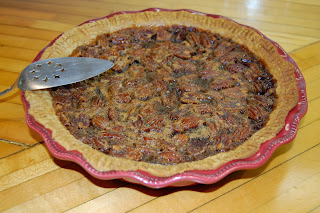 Prepare your crust and arrange in pie plate. Pour the mixture into the pie shell. (If you have extra syrup, you can pour it into a small baking dish or ramekins for a nice little treat.) Bake the pie for 50-60 minutes. The pecan will rise to the top of the pie forming a caramel coating and the finished pie should be firm, and not giggly. Allow the pie to cool completely and the filling to fully set before cutting. Serve the pie with whipped cream laced with a little bourbon for the perfect Southern delicacy.

Thanksgiving is all about tradition and while you may love your Gram's pie recipes, you may want to try something new and create your own tradition. For some new ideas download the FREE eCookbook, Delicious Thanksgiving Desserts: 11 Easy Pie Recipes from TheBestDessertRecipes.com which includes a wide variety of homemade pie recipes that everyone your family will love. And, be sure to check out page 17 which features our own Sweet Potato Pie!

Everyone has a favorite pie that makes them nostalgic for a special moment in their life. What is yours? Please feel free to share in the comments section.