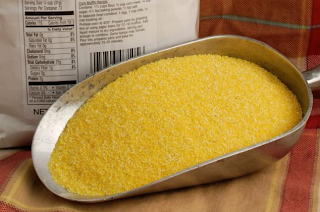 Cornmeal occupies a prominent place in American culinary history. It has been praised by native reporters and poets, berated by foreign writers no less illustrious than Charles Dickens and Alexandre Dumas. Cornmeal cookery provokes considerable regional controversy, and consequently occupies considerable space in a vast number of our cookbooks. Variations in a corn bread recipe, for example, may cause small-scale domestic warfare. Arguments arise between one town and another over the correct name for a mere lump of meal, and names may vary even within a small town. Cooks become wildly possessive about their "definitive" versions of spoon bread or corn sticks, and disputes still arise over the superiority of yellow or white meal in certain dishes.

For "corn bread" one dialect dictionary lists as synonyms; scratchback, hoecake, ashcake, journeycake, johnnycake, and corn dodger, explaining that all are corn breads in their simplest form and as truly American as corn itself. "In their simplest form" implies a "bread" of meal, water, and sometimes salt. Simple fare indeed, but a lifesaver to the first Colonists, who learned basic preparation from the Indians. The maize that the Indians cultivated was a spectrum of red, blue, pink, and black kernels, as well as the more common white and yellow. Indians also supplied popcorn for the first Thanksgiving meal. In fact, "Indian" or "Injun" was the early American name for cornmeal, distinguishing it from wheat, which was (and still is) often called "corn" by the British. Rye -n' injun was a bread devised by the Pilgrims, who found that with its low gluten content, cornmeal had to be mixed with other grains to rise with yeast.

The hundreds of varieties of corn grown in America fall into five main families: flint corn, a fine but easily damaged strain that grows in cool regions; flour corn or soft corn, the predominant type grown in Andean regions and favored by the Indians; dent corn, the main commercial variety: sweet corn, the sort that is eaten fresh off the cob or canned; popcorn, the mainstay of the movie industry and the only poppable kind. White and yellow meals from dent are most favored today, and those obtained from water-powered stone-grinding, as opposed to the more common dry milling, are generally considered superior in taste and texture. Water-ground meal retains the germ, which makes it not only more flavorsome but also more perishable, hence the prevalence in markets of the germless, long-keeping variety.

Almost all cornmeal dishes can be made with either yellow or white meal, but the finished product will vary slightly: color, when indicated in the recipe, should therefore be observed. In baking, white meal gives a pleasantly uneven texture, a crisper outside, and a softer inside, whereas yellow meal gives a drier, more even-textured, slightly granular result. Lovers of cornmeal, however, tend to be rather fierce in their preferences. Below Mason and Dixon’s line, it is widely considered that white corn is for folks and yellow for critters. Indeed, stone ground white cornmeal is the keystone to soul food, and white meal is also the only type considered suitable for the Rhode Island specialty; johnnycakes.
Because it was such an important part of the Colonial diet and because it was unique to the Americans, corn became an informal symbol of our country. The literature of America is filled with chat of homely hot mush, but no one can match Joel Barlow's all-time commemorative to this dish. In 1796, Barlow wrote an extended hymn to cornmeal appropriately dedicated to Martha Washington and tracing corn from its planting through the preparation of what he considered to be its most perfect form “The Hasty-Pudding," the poem's title.

Hasty pudding is simply sweet cornmeal mush (cornmeal and water), the staple of every corn-growing people. Cooked until "thick enough to stand a pudding-stick," it was known variously as loblolly, stir-about pudding, cornmeal porridge, and samp.  The popular New England dessert is mentioned in the original "Yankee Doodle” and included in Amelia Simmons's American Cookery which was the first cookbook written in the United States (and published the same year as Barlow’s tribute.) Sweetened with molasses or syrup and perhaps enriched with eggs and milk, corn mush becomes a tempting dessert. 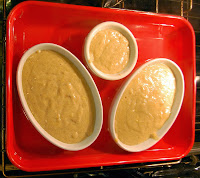 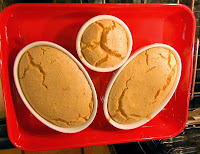 Preheat oven to 325°F.  Grease a quart-sized baking dish or 4-6 ramekins with cooking spray or butter.

In a heavy skillet, heat milk until is scalds.  Stirring continuously with a wooden spoon, gradually sprinkle in cornmeal.  Keep stirring rapidly to keep lumps from forming.  Bring mixture to boil.  Reduce heat and keep stirring until it starts to thicken. 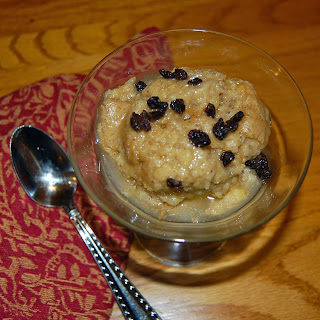 Remove the skillet from the heat and stir in the butter.  Once the butter is melted, add the brown sugar, molasses, spices, dried fruit or nuts if desired.  Continue to cool for about 5 minutes.

Beat the egg in a small bowl and stir into the pudding mixture. Pour pudding into the baking dish(es) and place in a bain marie (water bath) and add boiling water to within an inch of the rim of the baking dishes. Bake for 50-60 minutes or until the pudding is firm. Serve with warm bourbon sauce, if desired.

In a sauce pan mix all ingredients. Bring to a boil for 1 minute. Serve warm over hasty pudding.